Buy high, sell low? Alan and Megan return to battle it out

You might have seen a previous blog in which we compared the returns of two imaginary investors named Alan and Megan. Inspired by recent events, we decided to return to these characters. So, Alan versus Megan, the rematch. Who wins this time? 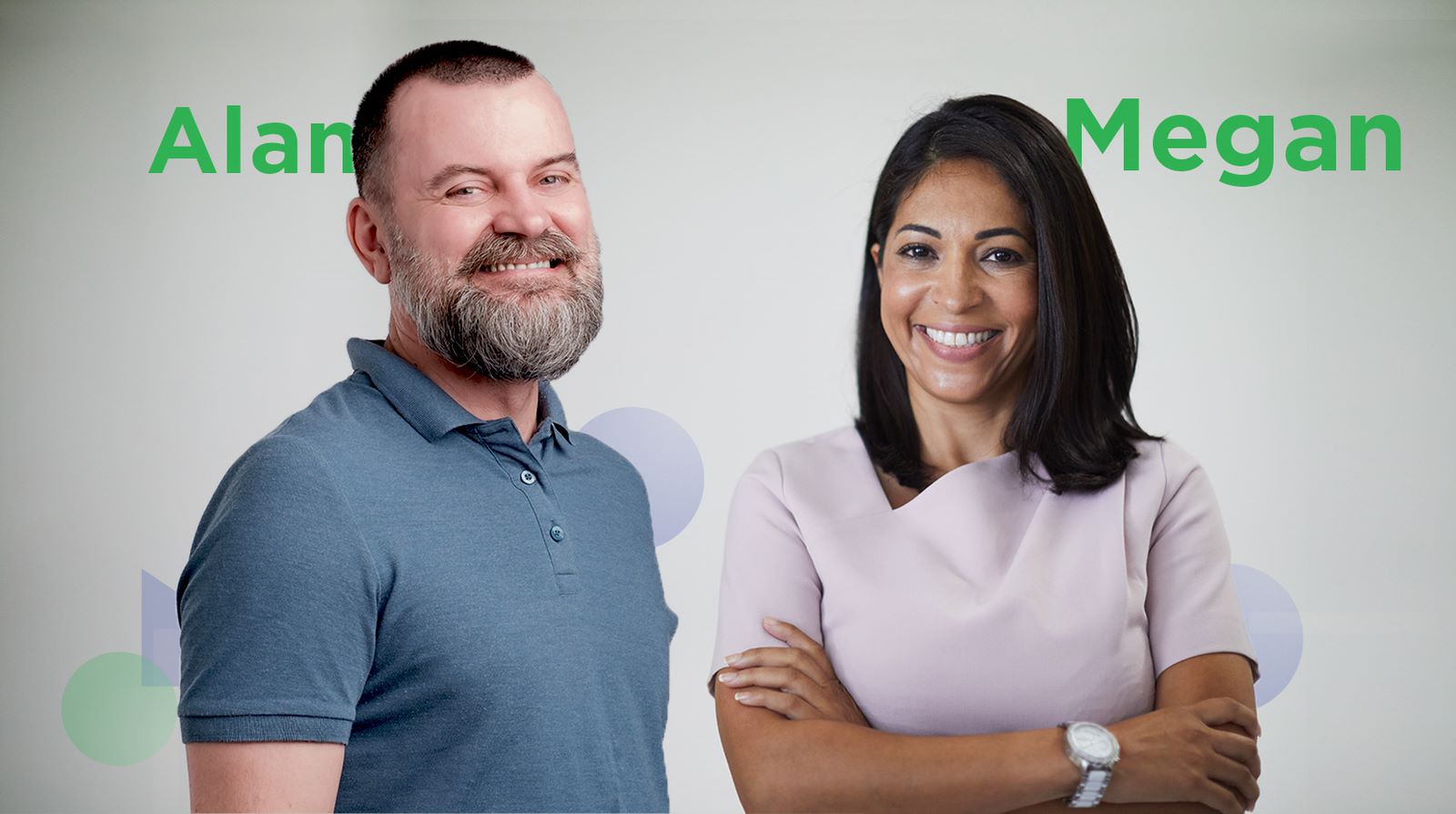 Last time around, Alan moved his investments into cash near the end of 2018 while he waited for Brexit to be sorted out. Megan meanwhile decided to stay invested throughout the year without changing her portfolio at all. You can see who did better last time here.

Events in the first half of 2020 prompted us to return to these two investors. Due to the sharp stock market falls caused by the coronavirus – and, more recently, a partial market recovery – some customers have been asking if “timing the market” is a better long-term strategy than simply staying invested.

This is a job for Alan and Megan.

Alan’s plan: sell when markets fall, buy when they rise

Alan’s idea is this. When the market drops, he’ll move his investments into cash to ride out that period of uncertainty. He’ll reinvest that cash in the same portfolio once markets begin to rise again.

In contrast, Megan is not going to do anything. She’s going to stay invested, whatever happens.

Let’s say that Alan and Megan are each invested in the FTSE 100 Total Return index, in other words they have a high-risk portfolio made up of the one hundred biggest companies listed on the London Stock Exchange1. To make it fair, we’ll do the comparison over a fairly long time period, 25 years.

Our technique for working out the winner

Here’s where it gets clever. Members of our investment and data science teams have built a game that lets us compare Alan’s “time the market” strategy with Megan’s “buy and hold” technique over the period from 1995 to the present.

Test out the game for yourself. (This game is designed to work on a desktop computer and will not appear on your mobile device.)

In the game, Alan is the “player” and Megan is the “market”. Let’s see a few different versions of Alan’s method to see how they compare with Megan.

Option one: five and five

In the first simulation, we see what happens when Alan follows a strategy to move into cash when his portfolio falls by 5% and to reinvest that cash when those same investments increase by 5%.

In the chart below, Megan’s performance is in orange and Alan’s is in blue. The red dots are the points where Alan sells his portfolio and the green ones are where he reinvests.

The first thing to notice is that in this strategy, Alan does a lot of buying and selling. But what about the performance? As you can see, the blue line finishes the chart at a far lower level than Megan’s line. In this version, Megan wins. 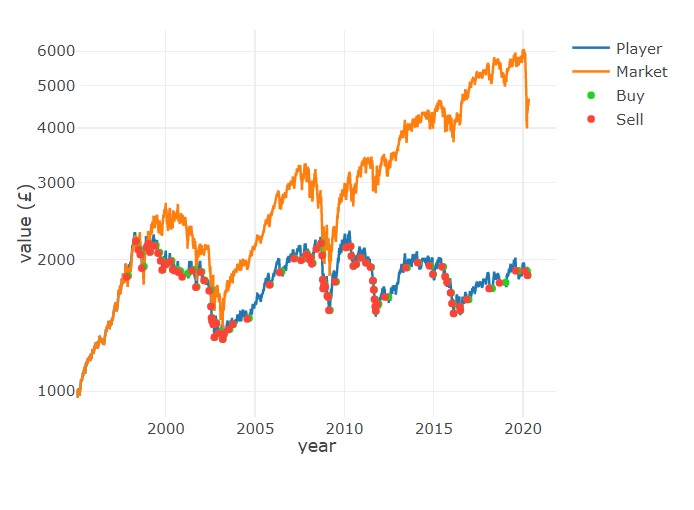 Let’s try that again with a slightly different strategy from Alan – this time he’s going to sell after a 10% drop in the market and buy when there is a 7.5% rebound. How did he do this time?

Well, Alan didn’t have to do as much selling this time – there are fewer red dots than before. And his performance is better than in the first example. But he still finishes considerably below Megan. 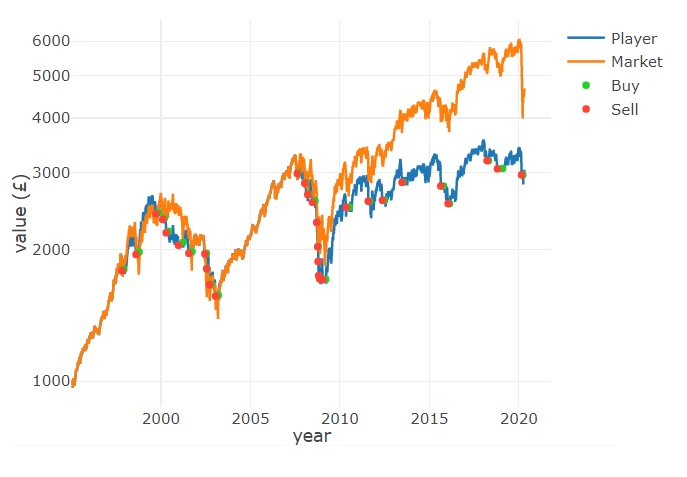 For our third example, let’s say that Alan adopts a strategy of selling after a 15% drop and reinvesting after a 12% rebound.

This time he has to engage in even less buying and selling, but if we look at the chart below, we can see that this strategy doesn’t beat Megan either. 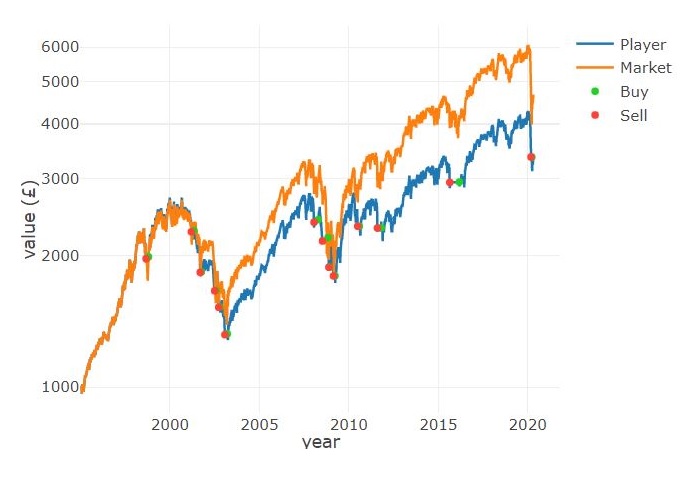 Can Alan ever beat Megan?

It’s possible to find pairs of numbers in which Alan beats Megan in our game. We suggest you try experimenting with the game to see if you can find one (Nutmeggers have tried it out and found several pairs that work – it can be done!).

Please note, though, that if you do find a winning pair, there is no guarantee that that pair of numbers will be successful in the future. Also, it is likely that if you were to play the same game using a different time period or a different stock index (the S&P 500 index instead of the FTSE 100, for example), you would get different results.

So, what’s the conclusion?

Based on our research it seems as though, for the second time, it’s generally better to be like Megan than like Alan. In other words, staying invested over the long term usually beats timing the market. When you think about it, this is great news. This is a rare case in life where doing nothing is actually rewarded!

We can also say that the majority of Nutmeg customers are more like Megan than like Alan. They tend not to change their behaviour after short-term movements in markets but instead stay invested for the long term, putting their faith in us at Nutmeg to manage their investments for them.

There is always the chance that Alan will win. Uncertainty is part of investing. But our research says the odds are against him and, if you have the choice, we think it’s best to be like Megan.