First, it was equities, now it’s bonds – the Chinese markets are opening up apace. Find out how access to the world’s third largest bond market1, hidden behind closed doors for so long, will shake up the global scene for fixed income investors. 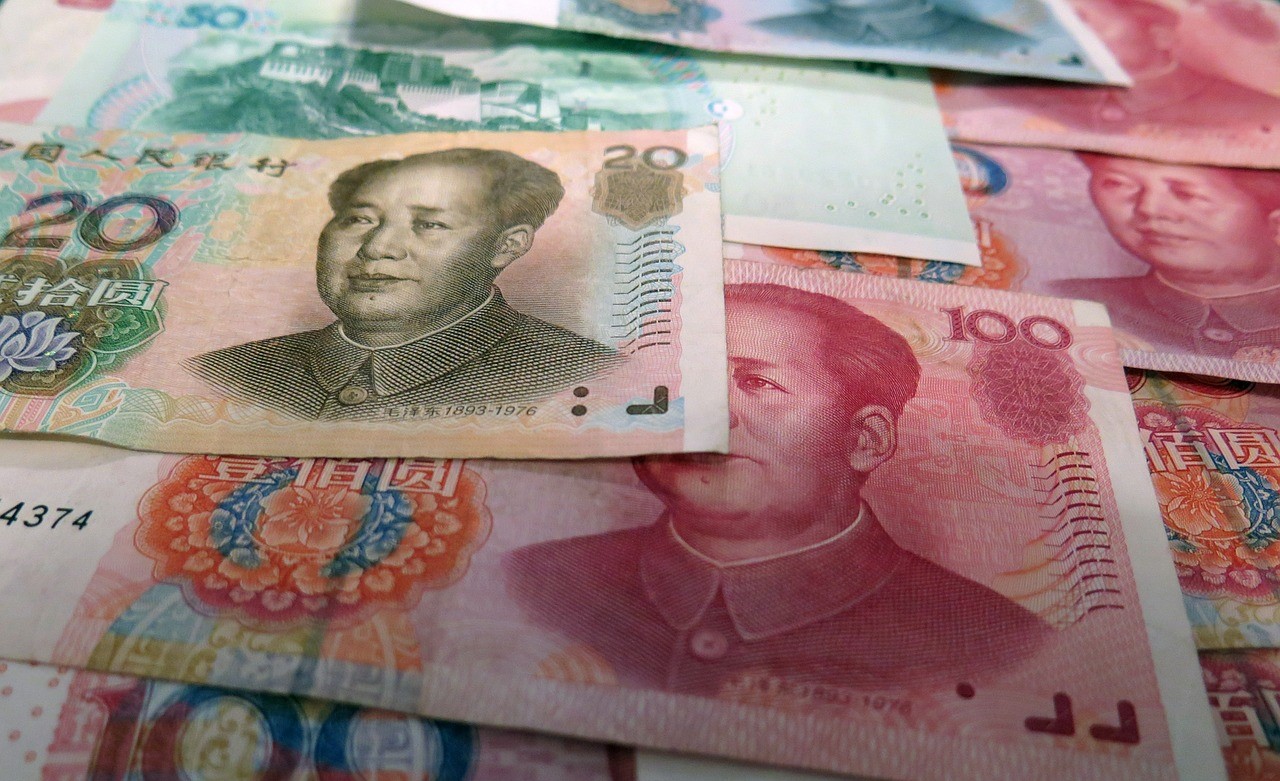 Earlier in the year, we looked at the inclusion of mainland Chinese equities into major emerging market indices and the resulting outlook on the global investment landscape. A similarly fundamental change is set to take place in the bond world.

Just like the domestic equity market, the Chinese bond market has long been walled off from outside investors. This is all about to change as China speeds up the liberalisation of its vast bond market with significant implications for fixed income investors globally.

China is the second largest economy in the world, accounting for 15% of global GDP2. The pace of development in the $4.4 trillion USD Chinese Government Bond (CGB) market has been swift. Soon, China may surpass Japan to become the second largest bond market, behind the United States.

The Chinese currency, the renminbi (CNY), has reached a milestone on its path to a broader international audience too. In 2015, it was designated as a reserve currency by the International Monetary Fund (IMF).

Notably, China’s credit quality has improved dramatically since the early 2000’s, climbing from a credit rating of BBB to A+, in contrast to many developed markets which deteriorated. In fact, China’s sovereign rating is now the same as Japan’s (A+), higher than Spain (A-) and Italy (BBB), and only two grades below the UK (AA) and France (AA)3. This means that China as a nation is less likely to default on debt commitments and thereby investors may be more inclined to lend to China than to some developed nations, which was once unthinkable. Despite this, the country’s debt market has long been excluded from major global fixed income indices due to restrictions in market access, capital controls, and operational barriers. 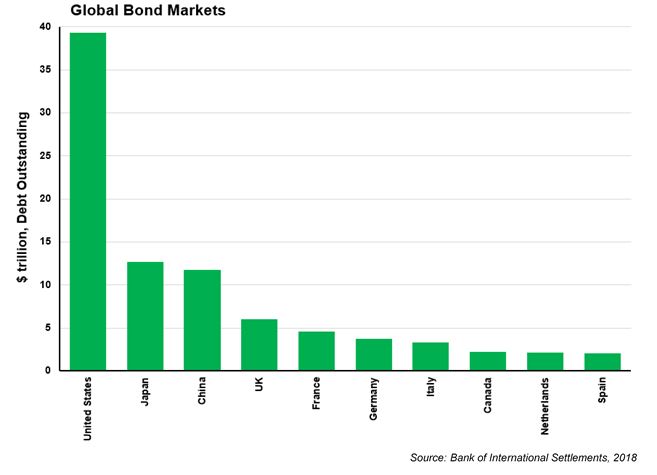 In recent years, the Chinese government has taken steps towards liberalising capital markets and increasing foreign investor participation in mainland China. Capital restrictions have been eased, and quota limits on foreign ownership of Chinese Government Bonds have been removed. Meanwhile, application and ownership processes have been streamlined. In 2017, a trading platform called Bond Connect was launched, giving foreign investors efficient access to the domestic China bond market via Hong Kong, with no restrictions on holding periods and repatriation.

Following these developments, the next step is the inclusion of Chinese bonds in the most widely tracked global and emerging-markets fixed income indices. Financial data and index provider Bloomberg kicked things off, announcing in March 2018 that it would start to add Chinese bonds to its flagship Bloomberg-Barclays Global Aggregate Index, starting in April 20194.

The inclusion of CNY denominated bonds will be gradually phased in 5% increments over a period of 20 months and they are expected to constitute 5.5% of the index after they’ve been fully included4. It’s important to note that only Chinese Government Bonds and Policy Bank Bonds, which are the most liquid elements of the domestic bond market, are to be included. By November 2020, the Global Aggregate index is expected to hold 386 Chinese securities, making CNY denominated bonds the fourth largest currency component of the index after USD, Euro, and Yen.

Bloomberg’s not the only major global fixed income index provider, and others such as J.P Morgan and Citi are expected to follow suit. This will pave the way for China to be further accepted into mainstream global bond investment. China was placed on “index watch” for potential inclusion in the J.P Morgan GBI-EM Global Diversified Index, one of the most widely tracked local currency emerging markets debt indexes, and its eligibility is to be reassessed later in 2018.

The immediate impact of inclusion will naturally be on global bond investors, in particular those who aim to closely follow the underlying index, some of whom may be investing in Chinese bonds for the first time. With $2.5 trillion4 of funds benchmarked to the Bloomberg Global Aggregate Bond Index, a 5.5% allocation is estimated to bring new investment of approximately $140 billion to the CNY denominated bond market. Whilst this is insignificant when compared to the size of the Chinese bond market, inflow will increase as other index providers follow suit.

China’s vast bond market significantly expands the global investment universe and presents a new opportunity for emerging markets bond investors. Although the attributes of Chinese bonds are likely to change as they become more integrated with global markets, CGBs have historically demonstrated unique facets that may be a source of diversification. Chinese government bonds demonstrate low correlation to broad emerging market debt indices and, during periods of increased risk aversion (2008-2009, 2014-2016), they have historically outperformed. However, it’s important to note that historic outperformance and low correlation is intrinsically linked to the fact that there hasn’t been a large international investor base in Chinese bonds, which has shielded the market from external factors such as sentiment. In markets, we know that past performance can’t guarantee future returns. Past performance is a particularly weak indicator for Chinese fixed income assets because the market environment in which we’ve observed this asset class so far is set to change, making it difficult to predict how things will pan out. 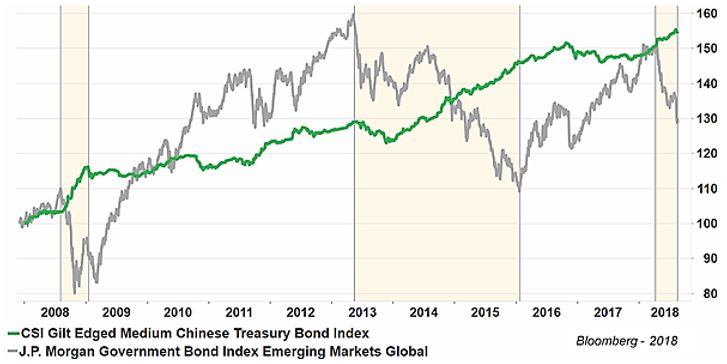 At Nutmeg, we don’t currently have exposure to Chinese government bonds, but we always keep an eye on developments like this. At the moment, we prefer emerging markets equity over fixed income on a risk-reward basis. With accelerating production growth across developing economies, alongside strong global trade and attractive valuations, we think emerging markets are still positioned to perform. As always, we continue to manage our portfolios to ensure that there is a good balance between levels of risk and potential returns. 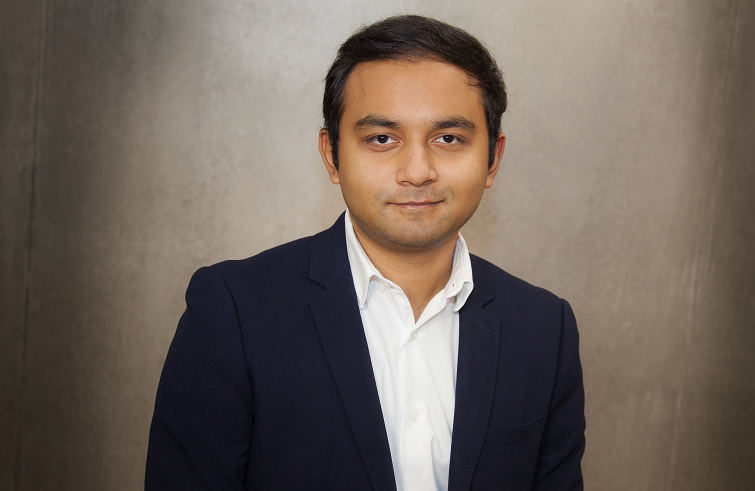