Does inflation have a future?

The short-term inflationary pulse is very weak, and yet we’ve reason to believe underlying inflation will return to the 2% government target in the medium-term. 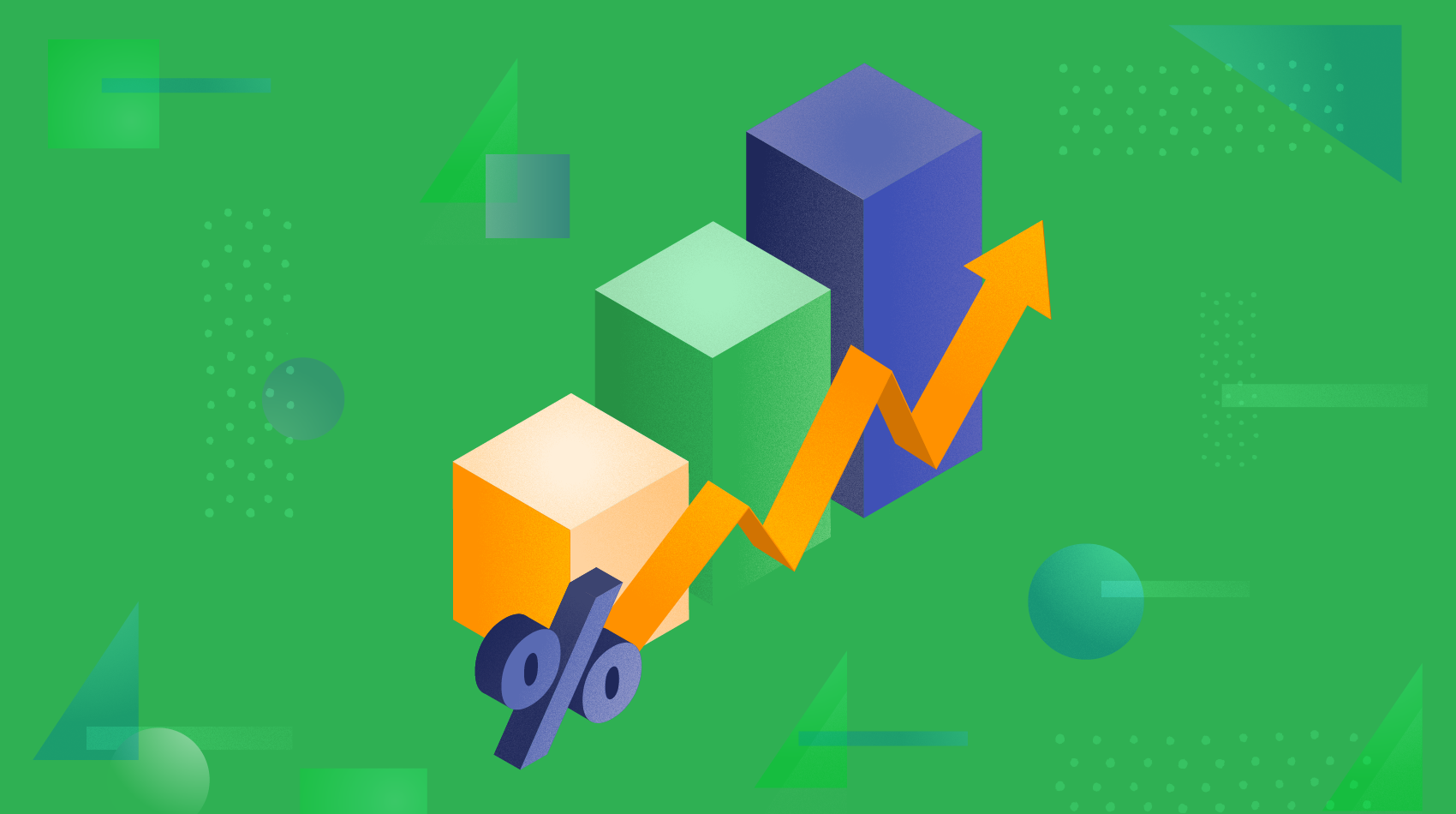 What do we term a healthy dose of inflation? Too high and you erode purchasing power and inflate the cost of borrowing. Too low – or negative – and you disincentivise spending. Either way, if the number is too variable then setting prices or planning more generally becomes difficult.

Low and steady inflation then is a sign of a healthy modern economy, with most central banks targeting an inflation rate of 2%. As the chart below shows, the US and UK have largely kept underlying inflation close to the target. However, since the global financial crisis (GFC), inflation has tended below the 2% line, making policymakers nervous. 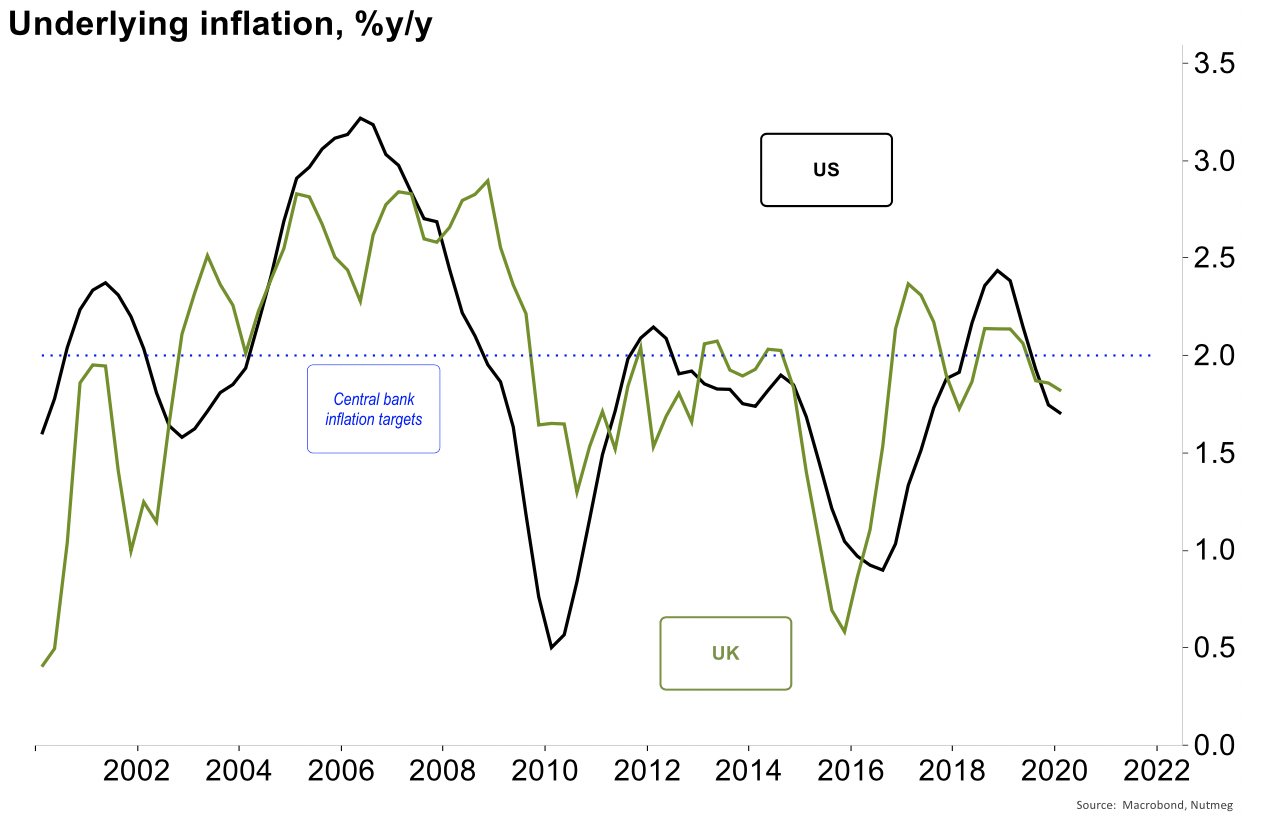 Before we can understand why inflation has stayed low, it’s important we first understand that inflationary pressures fall into two categories.

Since the GFC, we’ve seen energy prices fall because of structural changes within the oil industry, while broader commodity prices have remained low due to changes in global trade dating back to the GFC. Interruptions to the post-GFC free flow of trade have been made worse still by China’s new expansionist industrial politics and a new US resolve to push back on China’s ambitions.

As for Covid-19, global supply chains were going through something of a hiatus even before the pandemic, while global demand was only just regaining its strength post-GFC as 2019 ended.

Now, with shutdowns taking unprecedented chunks out of global activity, demand-pull inflation will likely prove weak in the short-term.

Medium-term we could see higher inflation

As for the medium-term, potential price-pressure points give us reason to believe inflation could pick up…

Fiscal spending could become inflationary
Unprecedented government deficits will need to be fully financed in the years to come. Tax increases may find their way through to final price increases if employees and companies aren’t willing to settle for less after-tax wages and profits. The table below summarises the fiscal response that will need to be paid for – with some omissions, including the 17% of GDP stimulus recently announced at the supra-national EU level. 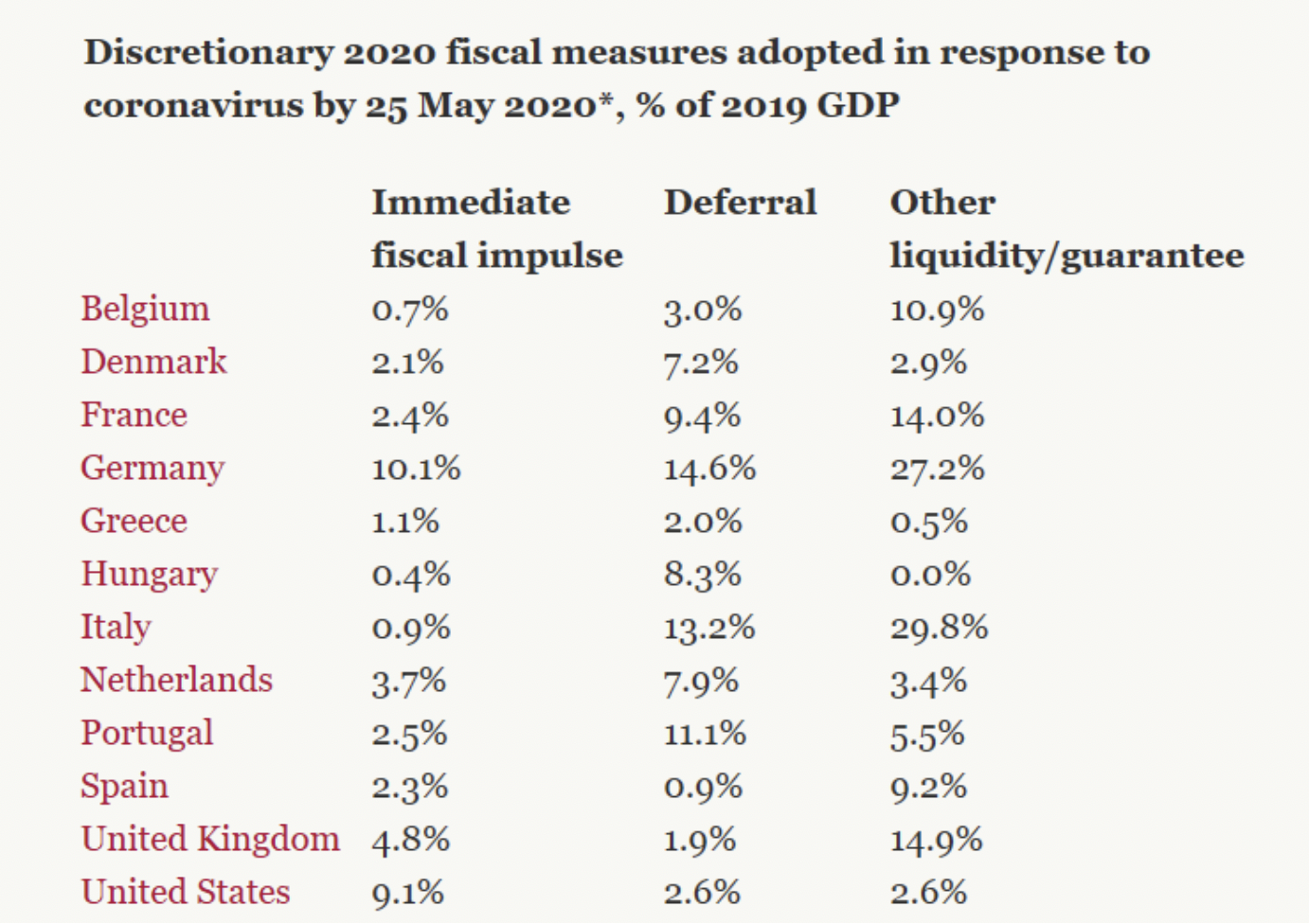 Services sector wages may rise
The post-COVID-19 global order will be more services-based than before. Technology is enabling new-economic-connectivity, and services businesses will be better able to harness this new growth. Expect there to be ever-greater competition for skilled workers, with the subsequent wage growth likely to feed cost-push inflation.

In the graph below, the marginal propensity to inflate is the four-year average inflation per unit of real economic growth. For Japan, it’s been a smooth straight downward sloping line for 40 years. Not so for the US.

Also in the graph, the Misery Index equals unemployment plus inflation. The graph shows the 10-year standard deviation of this measure and again underlines that while Japan’s macro-volatility has diminished, the US’s has not. 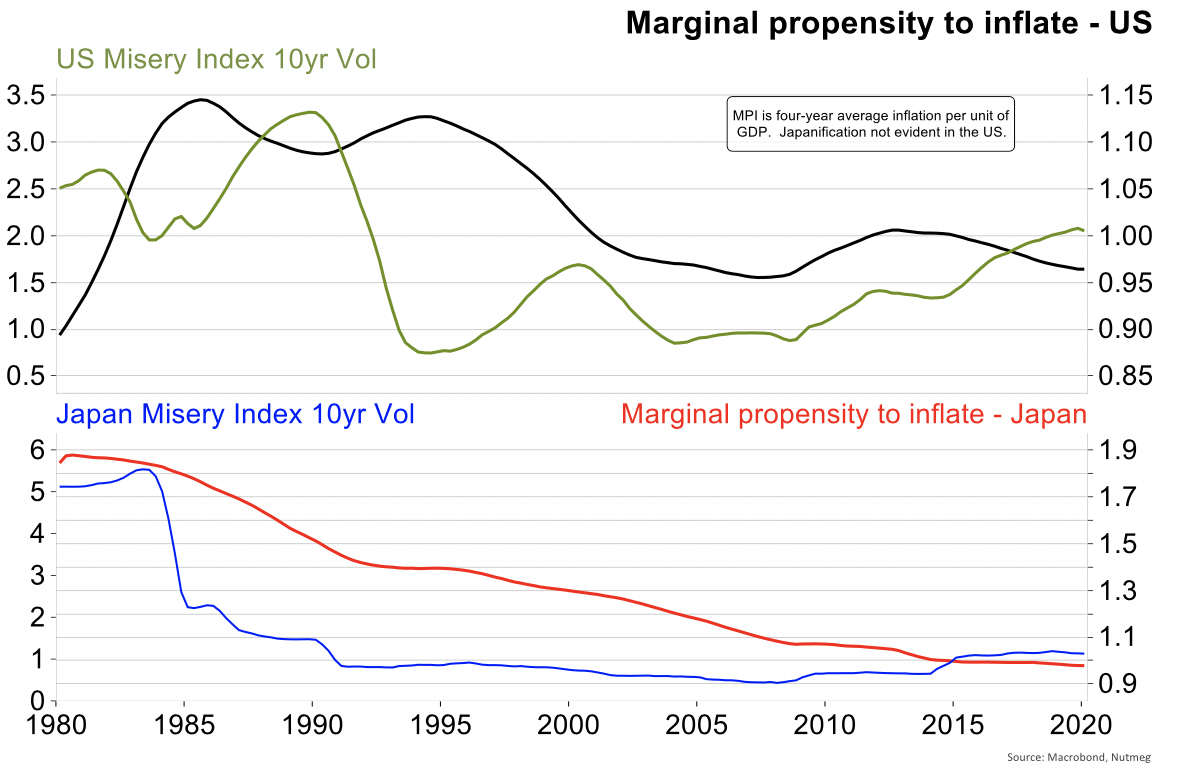 Central banks don’t like to see inflation below 2% on a medium-term basis, and the introduction of ‘zero-rate policies’ around the world underlines their strength of conviction in wanting to see inflation rise.

As shown in the chart below, in the years following the GFC quantitative easing saw bank reserves grow but not their overall balance sheets, which is  why the money supply (M2) did not grow in that period. As the chart shows, M2 is growing today, which indicates that today’s quantitative easing program is bolstering economic activity – not just bank reserves held at the Fed.

This increases the chances of success for the Federal Reserve in its attempt to increase inflation expectations, since strong money supply growth is typically associated with rising inflation in the medium to long-term.

In the chart, money base (M0) includes bank reserves held at the Federal Reserve. Money supply (M2) includes deposits in bank current and savings accounts, and so reflects broader bank balance sheets – including whether or not banks are expanding their lending. 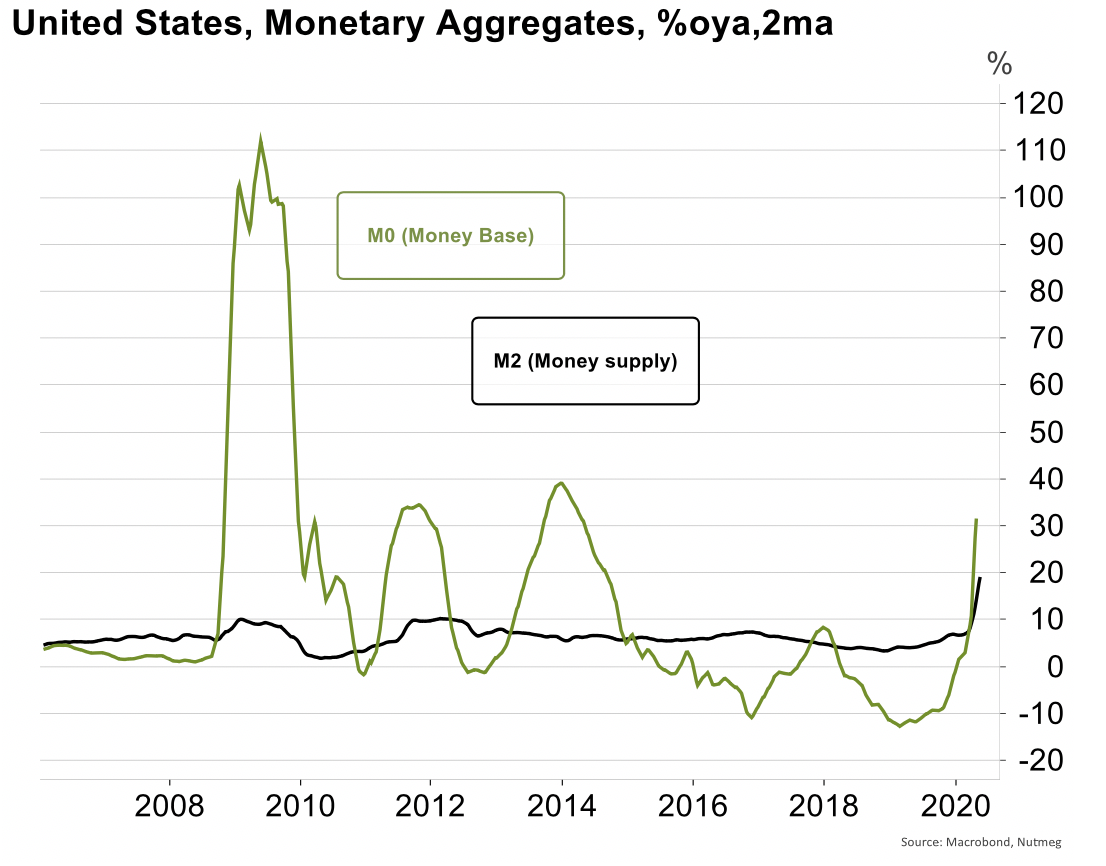 How is Nutmeg positioned with respect to inflation?

There is good reason to believe inflation will rise in the medium-term, not least because central banks around the world are wanting to boost it. Zero rate policy is a part of that.

Our investment strategy takes this into account, with a near neutral exposure to equities and overweight in technology stocks. Government bonds are more problematic, so we’ve diminished them in our portfolios in favour of corporate bonds. Meanwhile, the US dollar is heavily influenced by inflationary trends and, in time, the dollar’s stellar, decade-long, run will also come to an end.

As usual, the Nutmeg investment team keeps a close watch on this and all aspects of investment risk on behalf of our managed-portfolio customers.