Stock market drawdowns are never comfortable, and I say that as someone who’s experienced a few in my years. There’s a temptation to see the money in your investments fall and run for cover. But the rational side of our brain knows this is the wrong response. We know that the first rule of investing – “no risk, no reward” – means there will sometimes be downs as well as ups. The second rule of investing – “spread your risk through diversification” – can also help us here. 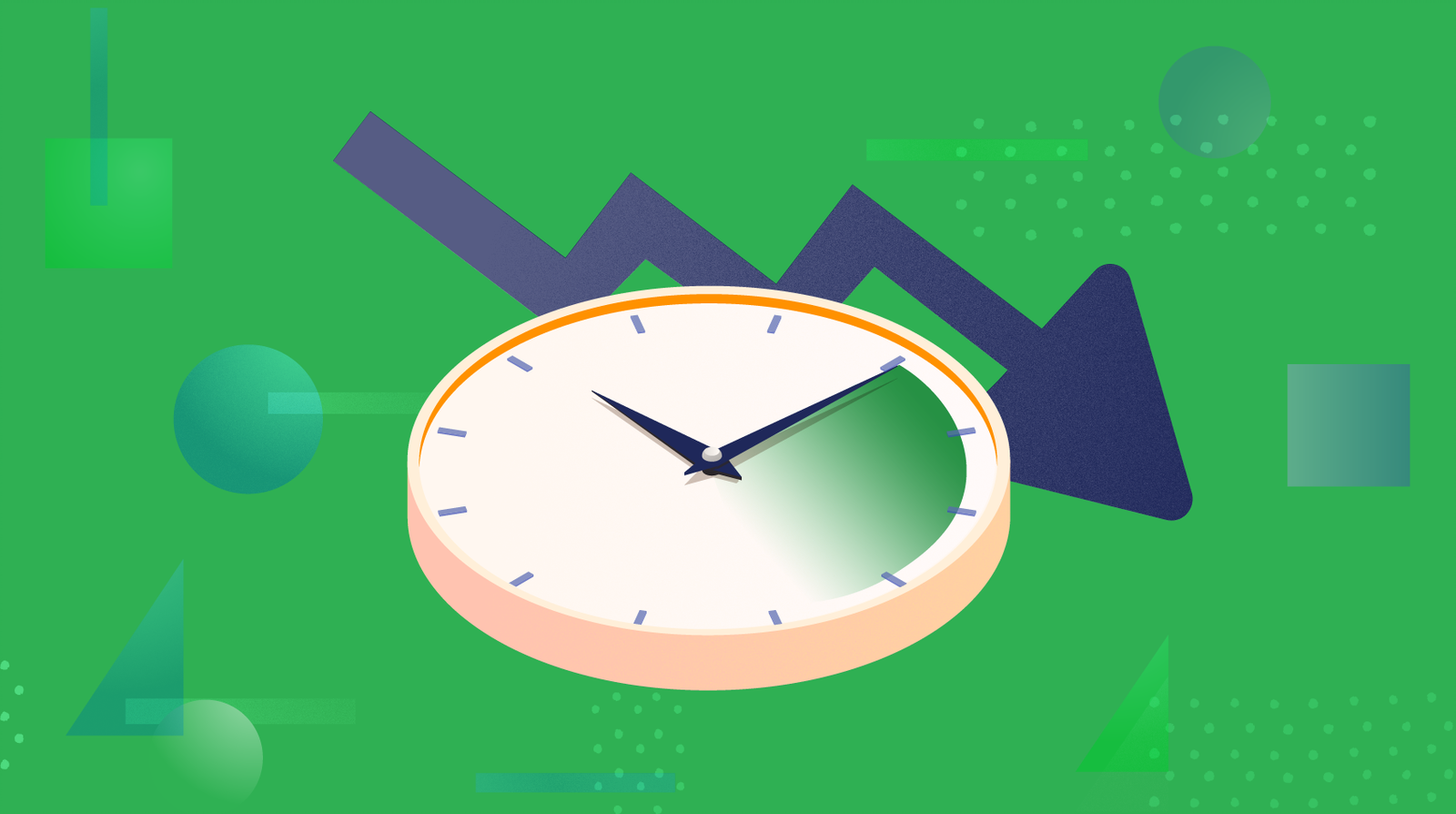 One option is to look at previous episodes of stock market weakness to get some guidance. Of course, there is much that history can teach us. But we should not forget the third rule of investing, “Past performance is no guarantee of future returns.” The rear-view mirror may not be the best guide to the way forward and relying on it alone may cause you to misstep.

How has a balanced portfolio behaved in previous drawdowns?

The chart below shows the simulated return of Nutmeg’s “balanced” fixed allocation portfolio since the mid-1990s – this is a medium risk portfolio. The grey lines indicate when the value has fallen 15% below the most recent “high-water mark”. The orange lines on the chart are the high-water marks. You can see how long it took for the portfolio to recover after a drawdown by measuring how long the orange line stays level (six months in 1998; four years in 2000; just over two years in 2007). You can see that these three episodes look quite different to each other. 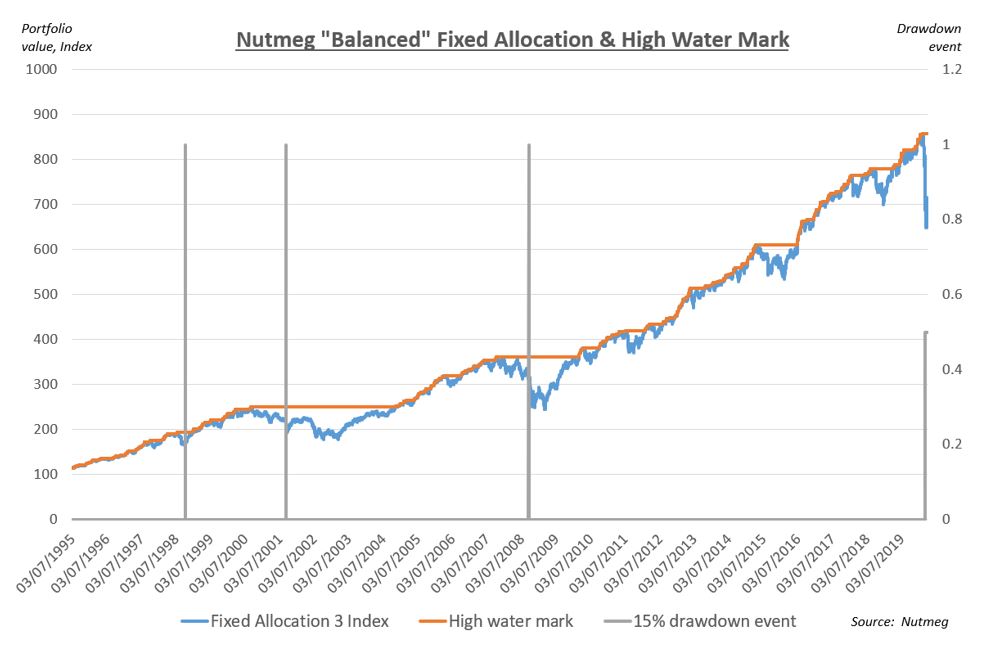 Now let’s look at those three drawdowns in more detail. The chart below shows how the Nutmeg “balanced” fixed allocation portfolio performed from the peak to the trough in each episode – that’s the length of time between the high and low points. The chart’s horizontal axis is the number of days since the high-water mark. 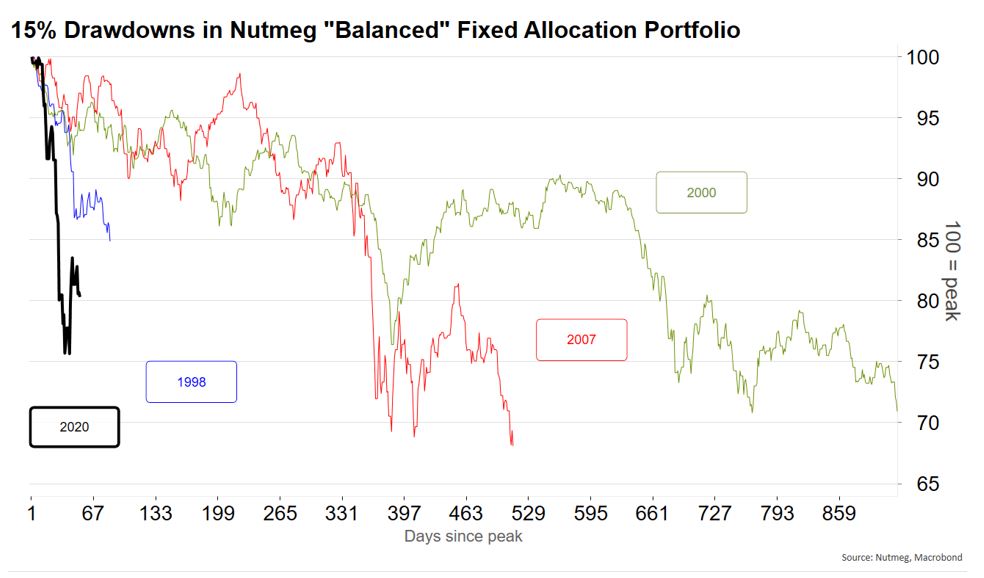 The chart shows there seem to be two general types of episodes: “single events” (1998) and “structural unwinds” (2000 & 2007). The episode we are currently experiencing (2020) may turn out to be either one; only time will tell. I will have more to say about that in a moment.

A closer look at previous drawdowns

Before we consider where the current episode may be taking us, let’s quickly recap what lay behind the previous ones.

So, what about the current ongoing episode?

Our second chart revealed that the pace of decline in March 2020 was unprecedented in modern times. That was scary for all concerned. Future financial textbooks will be filled with explanations once they are agreed upon. The volatility was extraordinary. To see just how extraordinary, see the next chart, which looks at US stocks and shows historic episodes of 20% drawdowns. Recent volatility even exceeded 2007 levels! 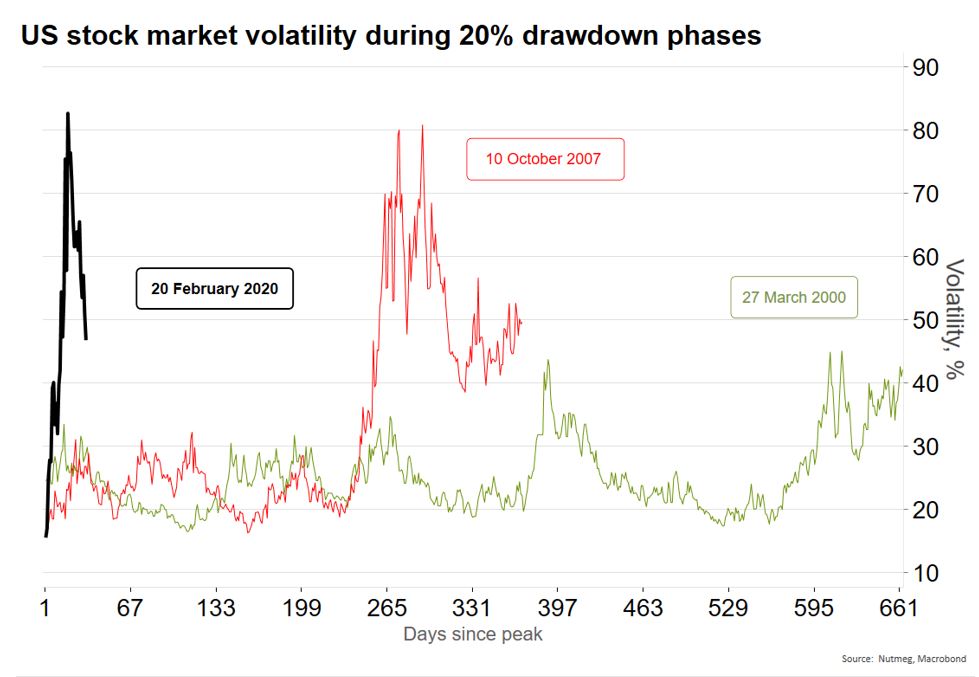 We can look at the market volatility another way, see the fourth chart, below. Here, we have shown the top-ten and bottom-ten daily changes in the stock market since 1995. A clutch of these extreme days occurred around the Lehman Brothers failure in late 2008, but the two worst days occurred, just two days apart, in mid-March 2020. 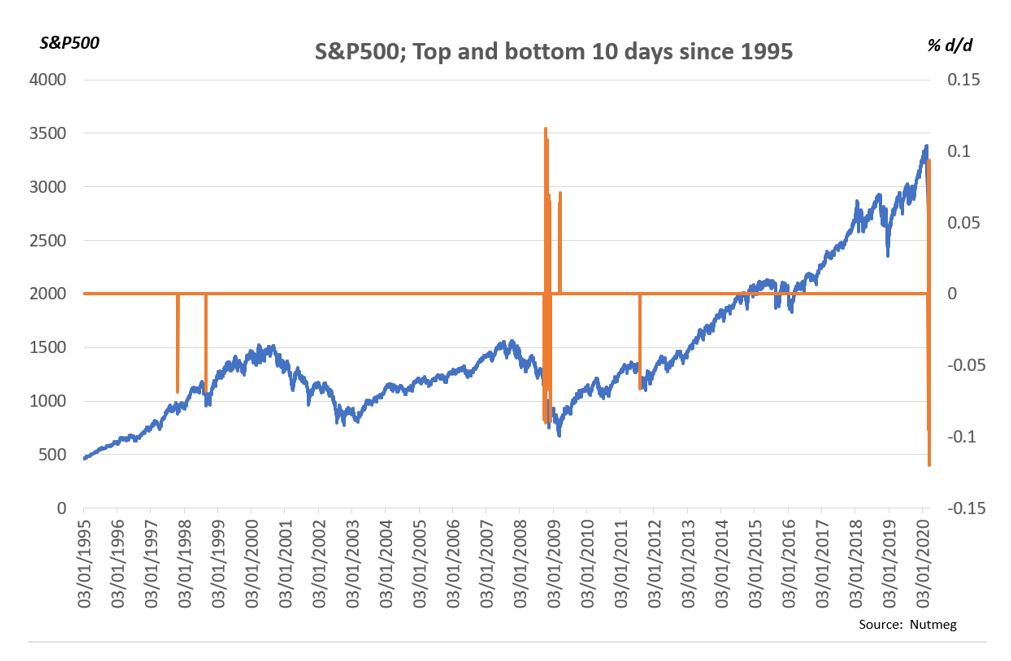 The financial market rout beginning in February 2020 had two main known causes: the completely unexpected health and economic impact of Covid-19 outside of Asia, and the oil-price shock caused by collapsed co-operation between OPEC members and their allies. The full extent of the ensuing volatility may have been due to liquidity problems in key assets such as US treasury bonds; we will have to wait for future investigations to determine this.

A seismic shock. What about those aftershocks?

The question keeping the Nutmeg investment team focused is whether the current drawdown is the result of well-understood events, namely Covid-19 and the OPEC cooperation failure, or rather is part of a structural shock, in which an unknown future loss of economic and profit-generating capacity results from economic shutdown.

From the 2000 and 2007 episodes, we see that unforeseen “aftershocks” were the predominant cause of stock market losses (chart two). Today, governments all around the world have instituted massive fiscal and monetary policy stimulus to try to offset the economic contraction expected from their Covid-19 medical policies.

The potential aftershocks of the unprecedented shutdown of the services sector, not to mention the withholding of dividend payments, not just in banking but across most stock sectors, must be taken into consideration. But in the interest of balance, the final chart, below, shows us that corporate America started this crisis in very good cash-flow health. Profit levels were high, with 80% cover of short-term liabilities by liquid assets. 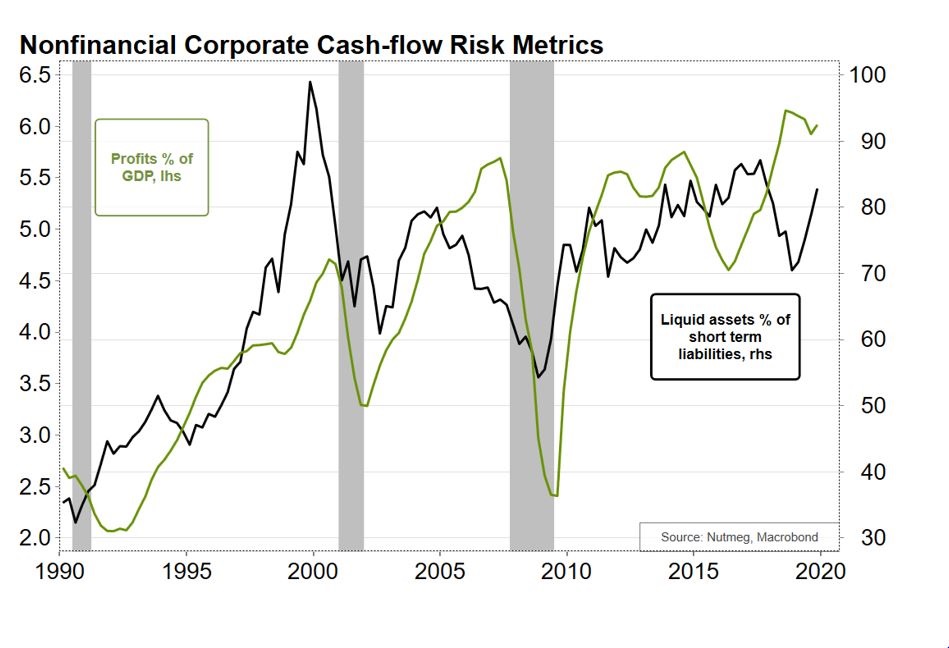 While governments have vowed to deliver “whatever stimulus it takes” to keep economies growing after the shock, there remains significant uncertainty around the effectiveness of medical policy – particularly in the US. The financial markets appear to have navigated the adverse conditions of March but, since the nature of those conditions are not yet fully understood, their reappearance cannot be ruled out.

In light of the potential aftershocks listed above, we have adopted an equity underweight position in the Nutmeg fully managed and socially responsible portfolios for the time being. This is not a rear-view mirror exercise. As this blog has shown, no two equity drawdowns are the same. We remain vigilant at monitoring all market, economic and medical outlooks, and stand ready to adjust the portfolios when necessary.

As with all investing, your capital is at risk. The value of your portfolio with Nutmeg can go down as well as up and you may get back less than you invest. Simulated past performance is not a reliable indicator of future performance.