How easy is it to outperform the market?

The FT reported recently that “stockpickers show signs of turnround after lagging behind markets”, based on data showing that 54% of active funds had outperformed the UK equity market. This represented a ‘turnaround’ from the just 22% which outperformed in 2016. Based on a dataset used by the FT from Standard & Poors1, 40.4% outperformed over three years, 45.9% over five years and just 24.8% over 10 years. 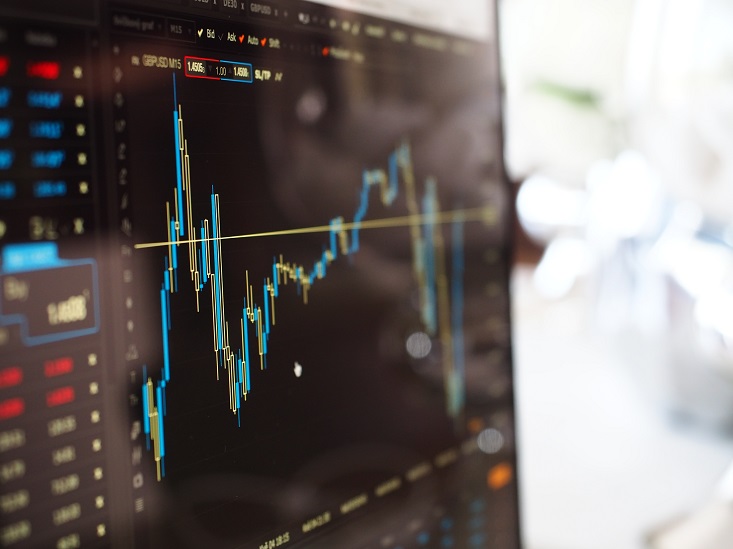 We take a deeper look at the statistics, whether this outperformance trend may continue to recover, and whether this ‘bet’ is worth taking.

How has the UK market performed?

Firstly, let’s take a brief look at how the UK market performs. As in many markets, large, medium and small companies can perform quite differently.

The chart below shows the return and volatility (a measure of risk) of these different segments over the past ten years (2008-2017). We have used segments from data provider MSCI, where UK large companies are currently the largest 37 firms, medium the next 65 and small the next 2622. By MSCI definitions the combination of the mid and large companies corresponds very closely to the more widely known of the FTSE indices – the FTSE 100 index – whereas small broadly corresponds to the FTSE 250 index, normally called ‘mid-caps’.

As can be seen in the chart, the smaller the company, the higher the return – but risk is higher too. Still, over the ten year period, small company shares delivered a return that was double that of large companies per unit of risk3. 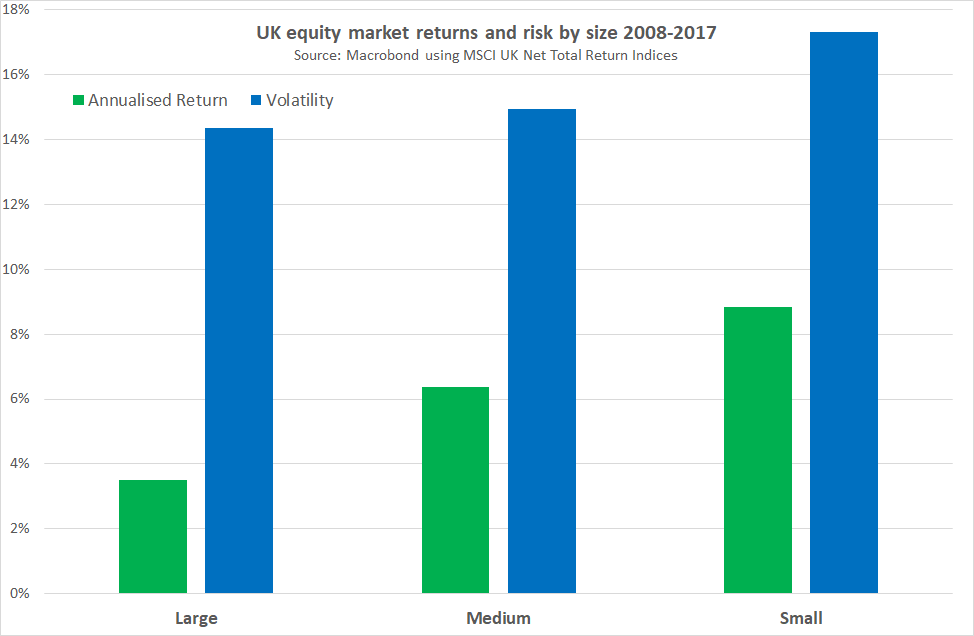 Given the marked difference in performance between companies of different sizes, how stockpickers allocate to this size factor, can have a pronounced impact on returns.

How are active funds performing?

From our analysis of active funds since 2007 we estimate that stockpickers have consistently over-weighted exposure to smaller stocks, in relation to the size of the market4. That the typical stockpicker overweights smaller companies makes sense: given the dominance of very large companies in the market, to take an active position requires moving away from these large companies – or alternatively being even more concentrated in a few companies, reducing diversification5. Moreover, smaller company earnings have grown faster than the large company earnings.

So, it is not surprising that the percentage of stockpickers beating the UK stock market is highly linked to the divergence between the returns of large companies and that of small companies. 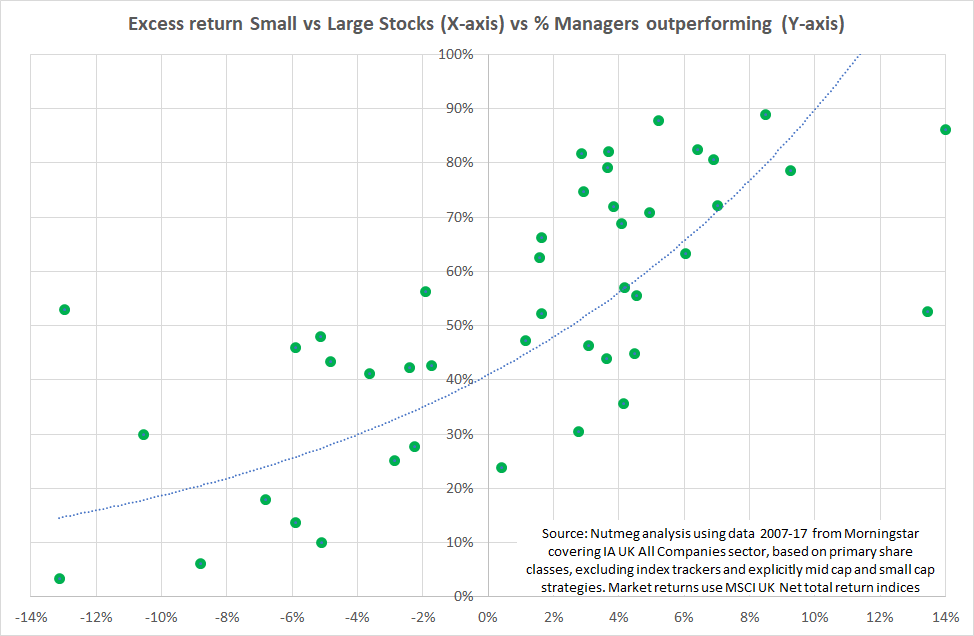 It follows then, that the outperformance of smaller companies is a primary factor in whether active managers beat the market. Put another way, UK active manager performance is largely driven by an asset allocation decision: how much to hold in small versus large company stocks. But even despite the average overweight to smaller companies and their significant outperformance, less than 25% of stockpickers have beaten the broad UK market. In our opinion, this is largely driven by the charges levied by active managers.

Our approach is to not employ stockpickers, but to focus on the asset allocation decision – how much to hold in UK large and smaller companies. Many academic studies have shown that asset allocation is the primary driver of investment returns over the long term6. At Nutmeg, we achieve diversified asset allocation through picking the best-in-class exchange-traded funds, which cost from 0.07% to 0.10% per year for the best FTSE 100 (large and mid-companies) and FTSE 250 (small companies), rather than the average 0.94% charged by UK active equity funds6.

Keeping costs low and focusing on asset allocation, rather than stockpicking, is key to our approach – one that has delivered outperformance over the past five years compared to our competitors.