The emperor’s crypto clothes: Why we don’t consider Bitcoin investable

A lot has changed since we first wrote about bitcoin three years ago; indeed, even since January this year when we took another look. We have witnessed an incredible rise in volatility and expansion of the crypto offering, which led the FCA to issue the following statement at the start of 2021.

“Investing in cryptoassets, or investments and lending linked to them, generally involves taking very high risks with investors’ money. If consumers invest in these types of product, they should be prepared to lose all their money.” 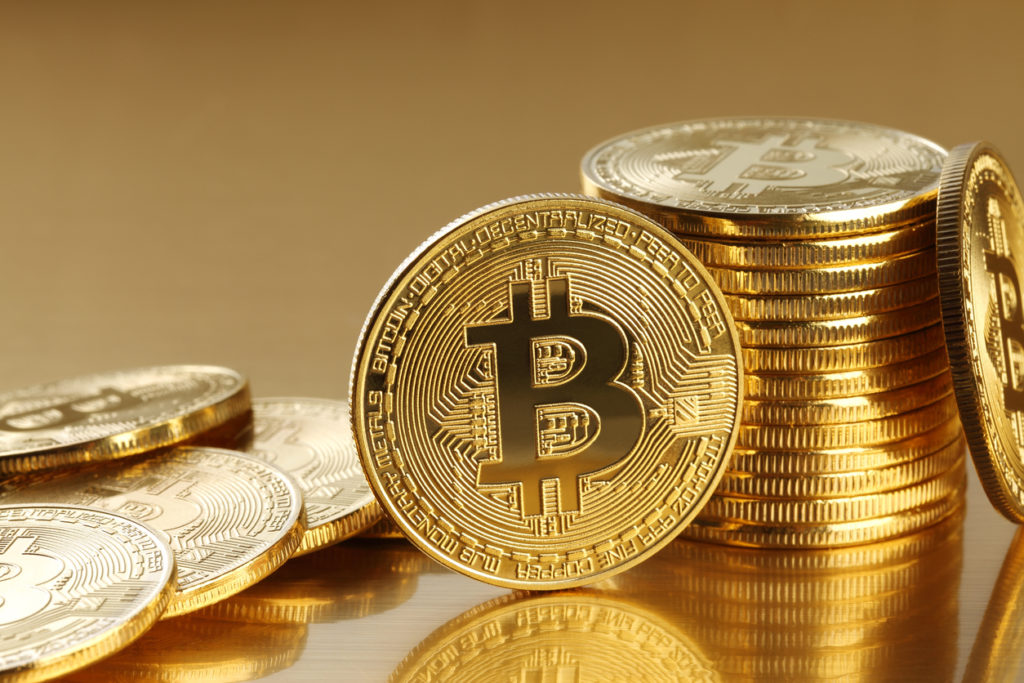 A common understanding of how Bitcoin and the other ‘coins’ might benefit the financial system remains elusive, despite January 2021 marking the 12th anniversary of Bitcoin’s creation. In this piece we predominantly focus on Bitcoin as the centre of gravity in the crypto market and as the established barometer for this asset class.

This article updates our own assessment of cryptocurrencies from three viewpoints:

We conclude that cryptocurrencies still face significant technical and institutional challenges, which are preventing them from becoming a store-of-value.

Finally, we offer the suggestion that if these new coins do somehow gain wide traction in their current form, then the organisation of human social/financial systems will have to have changed dramatically. Such a scenario is unlikely for a technology whose creator has yet to emerge from the shadows.

Nutmeg does not currently invest in this non-transparent and volatile financial instrument. The winners from the cryptocurrency market in its present form are unlikely to be long term investors, but rather high-risk hedge funds or trading platforms springing up to benefit from coin volatility. Other major beneficiaries are those wishing to shield their financial affairs from regulatory and enforcement scrutiny. The recent ransomware attack on US fuel infrastructure reportedly extorted $90 million in Bitcoin value from the operators – not a model case for Bitcoin usage.

Blockchain’s distributed ledger technology will very likely have its place in the future economy, but the transaction-software underpinning that system (the cryptocurrency clothing) remains – for now – a conceptual riddle. There is no guarantee or likelihood that any currently available crypto coin will suit the purpose of a future digital global currency.

1. Is cryptocurrency a global payment system?

2. Can we view crypto as a store of value (safe-haven)?

Safe storage of liquid or illiquid assets must guard against various types of risks. Below we explain these and whether crypto is currently able to mitigate them: 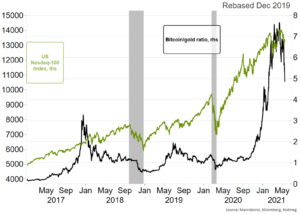 4. Regulatory oversight: We do not believe regulation is currently satisfactory – a status quo that is unlikely to change anytime soon. The crypto asset class remains firmly outside of regulatory oversight. The US Department of Justice recently released its early thinking on the cryptocurrency industry. It raises many questions that must be answered before broader trust can be placed in crypto. Furthermore, central banks the world over are responding by announcing their own intentions to create digital money – The Bank of England is the latest. These are a critical threat to the whole crypto-complex, underlining the policy pushback against anonymous transactability.

5. Limited supply: Arguably, its future fixed supply is the biggest source of value for Bitcoin advocates. It is expected that the full quota of 21 million Bitcoins will be ‘mined’ by 2040. In the meantime, the ‘value’ of these coins will partially depend on the slow mining process of about 900 per day. This drip-feed is designed to push up the price; the major difference to the (potentially) unlimited supply of conventional fiat currency. However, Bitcoin’s constrained supply has encouraged competitor coins and their cross-markets. Fungibility between these coins needs to be safeguarded but the space remains unregulated.

Secondly, constrained supply might feed its own volatility – something we are seeing at the moment as emerging trading platforms attempt to build inventory (PayPal’s purchasing of coins mentioned above) – making the instrument less attractive as a store of value. Furthermore, if the ever-expanding size of the future economy cannot be serviced by Bitcoin, or other crypto supply, then incentive will always exist to look elsewhere to store value (e.g. precious metals, property, land).

3. Is cryptocurrency an investable asset?

If cryptocurrency is an asset, it is a very unusual one. It has no claim on any issuer and no income is earned to underpin its present value. Here we touch on three other characteristics of conventional assets: ownership, investment performance and system of valuation. 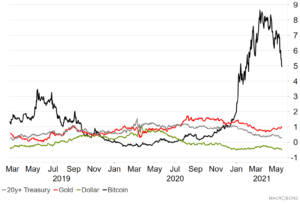 4. Are cryptocurrencies moving with the times?

If there is a cryptocurrency that is to become a mainstream investable asset, it may not even exist yet. For all their innovation, we believe the current crop of cryptocurrencies, including Bitcoin, look set to be on the wrong side of progress.

5. Can crypto live alongside fiat currencies?

If one or more versions of cryptocurrency become the workhorse for a future, secret, blockchain ledger system, several aspects of human organisation may need to change forever. All this illustrates how far away the widespread use of cryptocurrency and blockchain technology is from reality.

Last year the Australian Stock Exchange provided an example of the gulf between theory and practice when it shelved a blockchain project: ‘In order to get this project back on track we really need a robust governance framework which isn’t there today …’

A similar line comes from the US Department of Justice’s report referred to earlier:

‘Cryptocurrencies and distributed ledger technology present tremendous promise for the future, but it is critical that these important innovations follow the law.’

Bitcoin and cryptocurrency remain an intriguing space. Bitcoin’s extreme price volatility continues to make it attractive to short-term investors who can afford to tolerate extremely elevated levels of risk, though potentially encouraging another bubble like those seen in 2017/18 and 2020/21.

While some established investment houses have invested in Bitcoin, their motivations in doing so do not represent a full backing of the cryptocurrency model. At the heart of Nutmeg’s investment position on cryptocurrency is whether the current crop of coins can achieve the aim of providing a viable alternative to fiat money. This article has endeavoured to show that is by no means clear. It seems to us the lack of transparency and poor utility as a store of value, or means of payment, need to be overcome. As an investment proposition, there is no guarantee that any of the current coins will meet this challenge.

Nutmeg does not invest in Bitcoin or any other cryptocurrency. 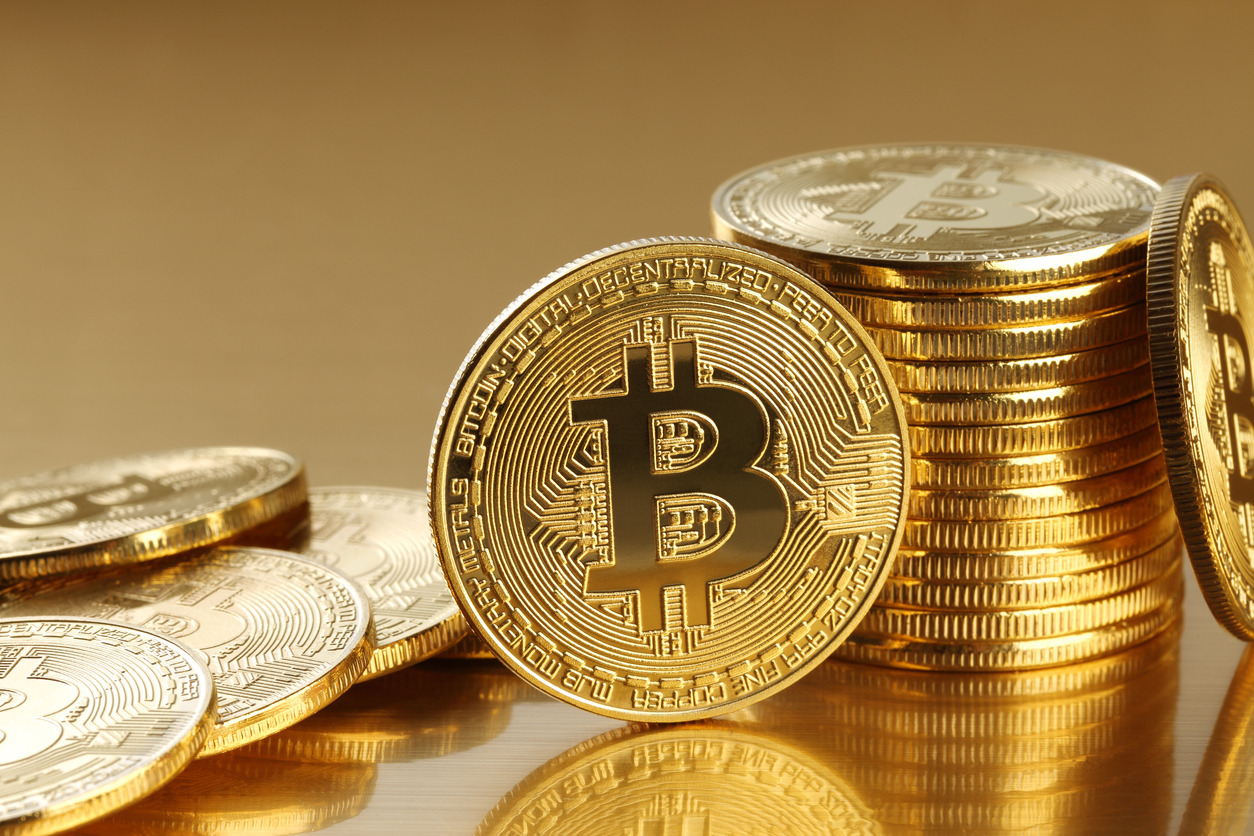