However, many private investors are unaware of the opportunities in bonds issued in emerging economies, both by governments and companies. Once regarded as an extremely speculative investment – particularly after several episodes of EM countries defaulting on debt (not paying interest or capital repayments) – EM bonds are now widely accepted as an asset class with interesting benefits – and particular risks.

The key reason behind the increased interest in EM debt is the improving credit worthiness of EM countries – both in absolute terms and, in particular, compared to the deteriorating finances of developed market governments.  Eighteen countries in developing economies are now rated as “investment grade” by Standard & Poor’s[i].  In general EM debt offers higher yields (better prospective returns) as a pay-off for the higher risk – and higher frequency –  of default.

Another key risk with many EM bonds is the risk of a sharp fall in the value of a currency as a result of market stress (eg credit crisis) or a particular event in any one country (eg political uncertainty).  The returns from EM bonds are driven by different economic and market factors to bonds in the developed world, so offer diversification benefits. 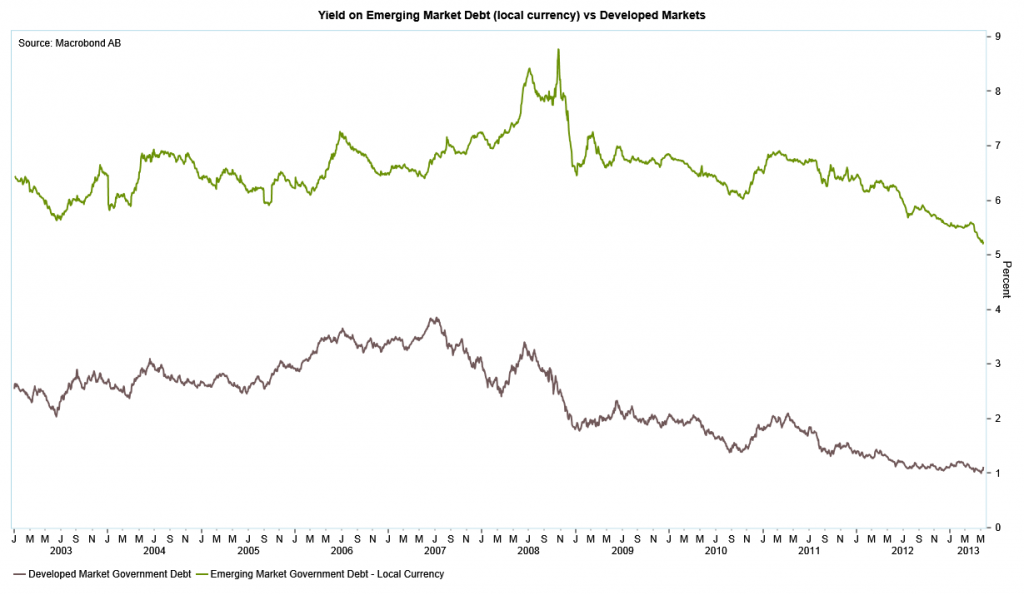 EM bonds come in four flavours from a wide range of countries.

1) External (‘hard currency’) debt are bonds issued in currencies such as the US dollar or euro.  This is commonly the first debt to be issued by a government to tap overseas sources of finance.  Hard currency EM debt was created in 1989 when the debt of countries which had defaulted in the 1980s was converted in external currencies – so called “Brady-bonds”.  More recently the external debt market has a growing presence of what is known as “frontier” markets.  For example, in April 2013 Rwanda issued its first external bond, borrowing $400million over 10 years, paying 6.625 per cent per annum.  Issuing debt in an external currency means that investors are relatively unconcerned by domestic emerging market inflation and changes in local exchange rates.  They are principally concerned about whether a government can finance debt repayments – or will become unwilling to do so.

2) As financial markets develop, governments issue Local currency government debt – bonds in their own currency such as Brazilian Real.  While the majority of governments issued short-term debt (Treasury “bills”), in many economies the local market in longer-dated bonds (eg 10 years to maturity) is under-developed and demand is weak.  As these domestic markets find new buyers (eg local pension funds) the depth of available issues improves.   Investors in EM local bonds are exposed to changes in government policy – particularly with regards to government borrowing, inflation, interest rates and the exchange rate.  More recently, changes in exchange rates have provided the greatest source of volatility for investors.  As such, an investor in local government debt not only judges whether the bonds are a good investment, but also whether it is worthwhile investing in the currency.

3) Once a local debt market is established governments may choose to issue inflation-linked debt – ie bonds where the regular interest payment and the final maturity value are linked to inflation.   The EM inflation-linked bond market is currently dominated by five countries – Brazil, Mexico, Israel, Turkey and South Africa – but bonds are also available from Korea, Thailand and Poland.  Investors in EM index-linked debt are much less concerned with rising inflation (normally good for index-linked bonds) but are exposed to currency risk.

4) Companies in emerging economies also issue Corporate debt as the market in government debt becomes firmly established (to provide a benchmark for risk in that country).  This is often issued by state or part-state owned companies and therefore entails both government and corporate risks.

We find EM bonds a very useful asset class to include in investment portfolios.  Through exchange-traded funds we are able to invest in these four EM debt markets.   Each offer different risks and potential returns so we continually monitor and analyse which markets offer the most useful benefits.

As these markets grow they will become an increasingly important area for investors – particularly given that the massive amount of government debt already issued in developed markets currently offers paltry returns.

The views and opinions expressed herein are for informational purposes only. They are not personal recommendations and should not be regarded as solicitations or offers to buy or sell any of the securities or instruments mentioned. The views are based on public information that Nutmeg considers reliable but does not represent that the information contained herein is accurate or complete. With investment comes risk. The price and value of investments mentioned and income arising from them may fluctuate. Past performance is not an indicator of future results, and future returns are not guaranteed.