We’ve all read the stories; from food and energy bills to petrol and air fares, prices are going up. UK consumer price inflation (CPI) is at a 30-year high – as at 5.5% in the 12 months to January – and it’s been tough for us all. But, while near-term increases in the cost of living are never comfortable, we look beyond the headlines to understand whether inflation is here to stay, and what it tells us about the health of the economy. 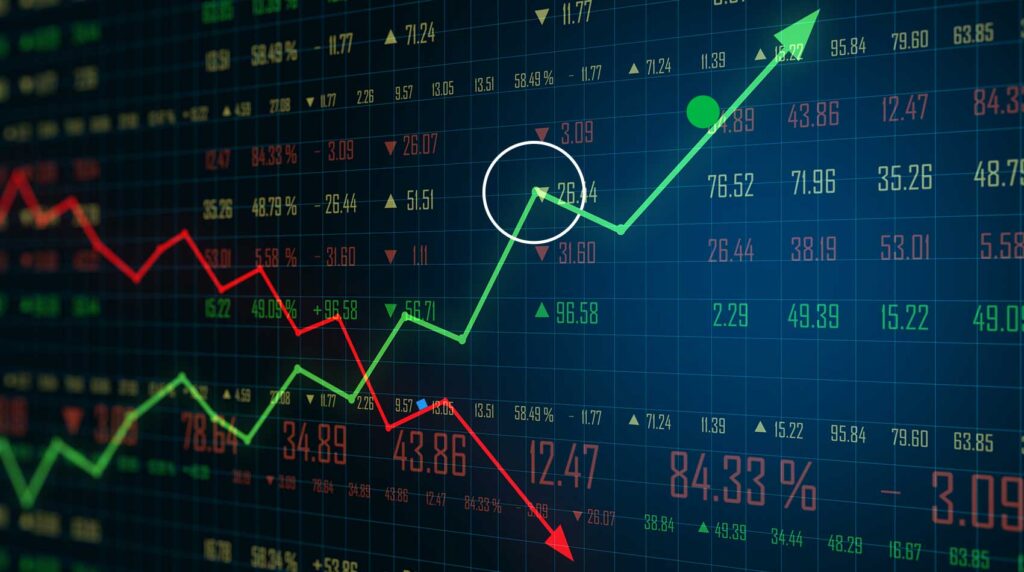 It’s fair to say inflation is something we in the UK have not had to worry about for a long time. Not since the early 1990s, when inflation peaked at 8.4% in June 1991, has it really been much of a concern. For historical context, some of you may remember when oil embargos saw price rises close to 25% in the mid-1970s, though we believe predictions of a repeat of such scenario are off the mark.

As a benchmark, most central banks, including the Bank of England, target CPI of around 2% annually. Low and steady inflation is seen as a sign of a healthy economy, ensuring all stakeholders continue to benefit from an efficient allocation of resources.

In this scenario, savers get a reasonable rate on deposit accounts, while borrowers are not overly incentivised to take on more debt. Companies retain some flexibility with prices – safeguarding profitability – while their workers do not suffer any significant real income loss, mitigating the need for larger wage claims.

However, inflation has been trending below this 2% figure since the 1990s peak. A prevailing factor in this has been rapid globalisation and the benefits of cheaper production and import costs, especially from the manufacturing powerhouse of China which kept the lid on inflation for much of the developed world. However, as the relative cost benefit of cheap Chinese goods has eroded, so too has the disinflationary impact of its imports.

Chart 1 shows the Personal Consumption Expenditure Deflator as a measure of inflation based on changes in personal consumption versus the 10-year average trend. 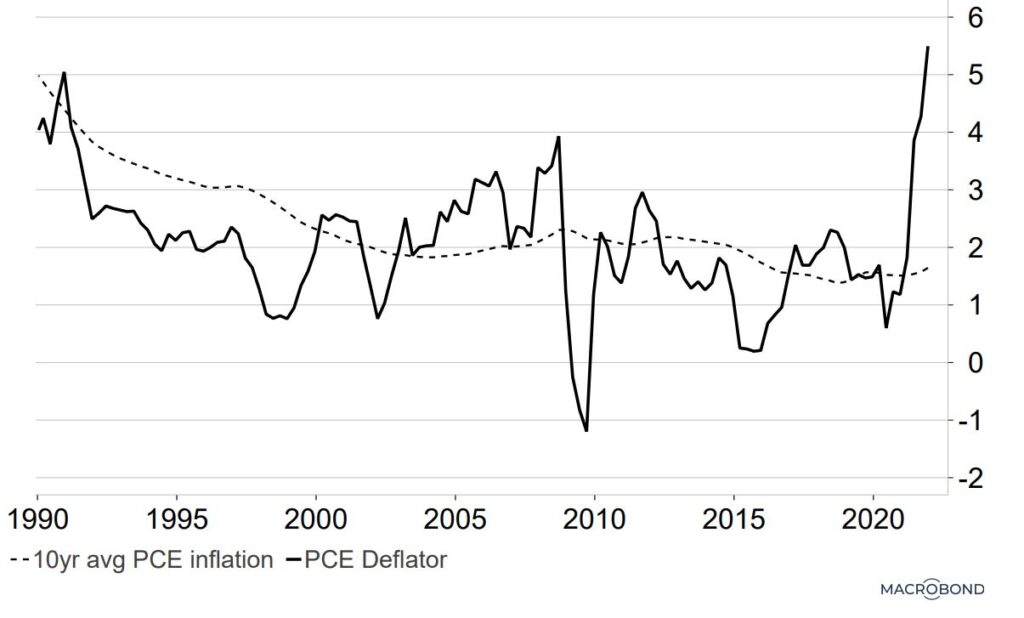 So, what’s causing the rising inflation that we are seeing today? As we’ve discussed previously, recent months have seen the emergence of global supply chain bottlenecks as businesses gradually reopen following the sharpest contraction on record. While some of these productivity shocks are now easing, the Covid pandemic has nonetheless reinforced a partial wind-back of the globalisation trend as relationships with China become less open.

Other productivity shocks that have contributed to inflation include the ‘great resignation’ with the pandemic leading many workers to change their occupations, and the ‘great reset’ in the UK labour market following Brexit. As we shall discuss later, rising wholesale energy prices have also been a huge contributing factor in rising prices.

That this inflation is now starting to come through the system quite quickly has put central banks on alert. The Bank of England has already initiated two base interest rate rises, in December and February, to stand at 0.5% currently, while in January the US Federal Reserve published minutes from its December meeting which showed unanimous agreement on the need to tighten monetary policy by raising interest rates “sooner or at a faster pace” than had earlier been forecast. Still, this does not necessarily mean that inflation is a longer-term issue.

Once the dust settles…

While the need to combat rising inflation is clear, the more alarmist commentary on the subject seems, in our view, to forget that price rises cannot keep going up indefinitely. Inflation is defined as ‘continuous ongoing price rises’, but we see commentators confuse the current temporary shocks with persistent increases.

While the pandemic may have been an abnormal and unprecedented event, economic growth upswing suggests the subsequent inflation will follow a more typical 18-month lag. Chart 2, an illustration of US economic growth versus inflation over 20 years, shows that the 2020 lockdowns have interrupted this usual cyclical lag. However, once the once dust settles on resetting supply chains and inventories then there is little to suggest that the usual pattern will not reassert itself. 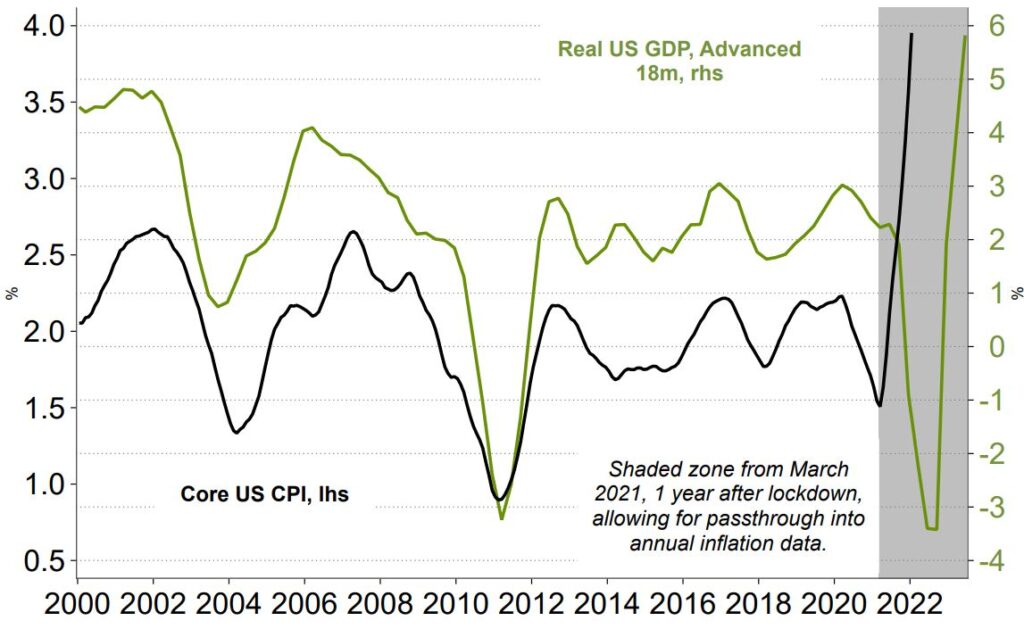 The productivity shocks highlighted above may cause inflation to settle at a slightly higher rate than we have seen in recent decades, though in many respects this has been a consistent aim for central banks in trying to bring back some price rises into the financial system since the great shock of the 2007/08 global financial crisis.

So, let’s look in a little more detail at some of the major factors in play in causing inflation, and whether or not these are likely to persist on a longer-term basis.

Wage growth data at home and abroad is often in the news, and it’s important to remember that supply bottlenecks are not just about ships, airlines and cargo containers being stranded in the wrong places because of pandemic disruption. The mobility lockdowns and reshoring of key production mean that human resources are also not readily available when and where they are required.

There’s a case to be made that skilled worker shortages in areas such as science and technology potentially creates longer-term inflation issues until more trained workers are available.

Chart 3 shows how wages have traditionally been the key driver of inflation within the services sector in the US. However, at the margin, supply chains for goods production are becoming more domestically focused – as we gradually try to wean ourselves off from cheap overseas imports – and wages may take several years to find their new equilibrium.

Chart 3: US wage growth versus services inflation, % over year ago (oya) 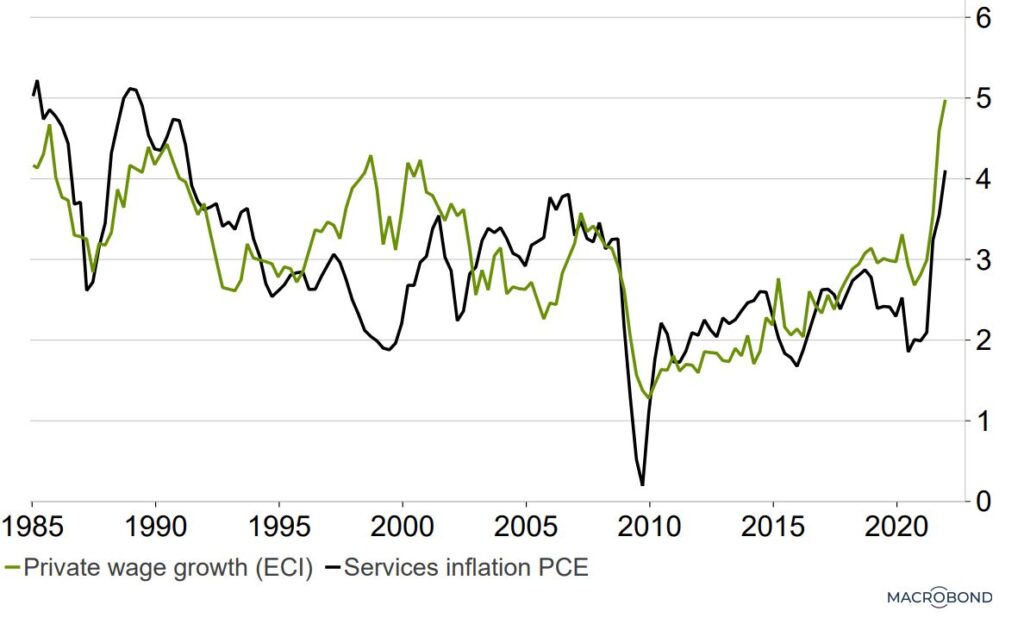 An area where we all feel the pinch in price rises is in commodities, particularly when it comes to heating our homes and refuelling our cars. Prices have certainly shot up as post-pandemic bottlenecks have arrived, though with global construction cycles slowing and industrial production normalising to more sustainable levels, we believe ongoing upwards pressure on commodity prices should ease. 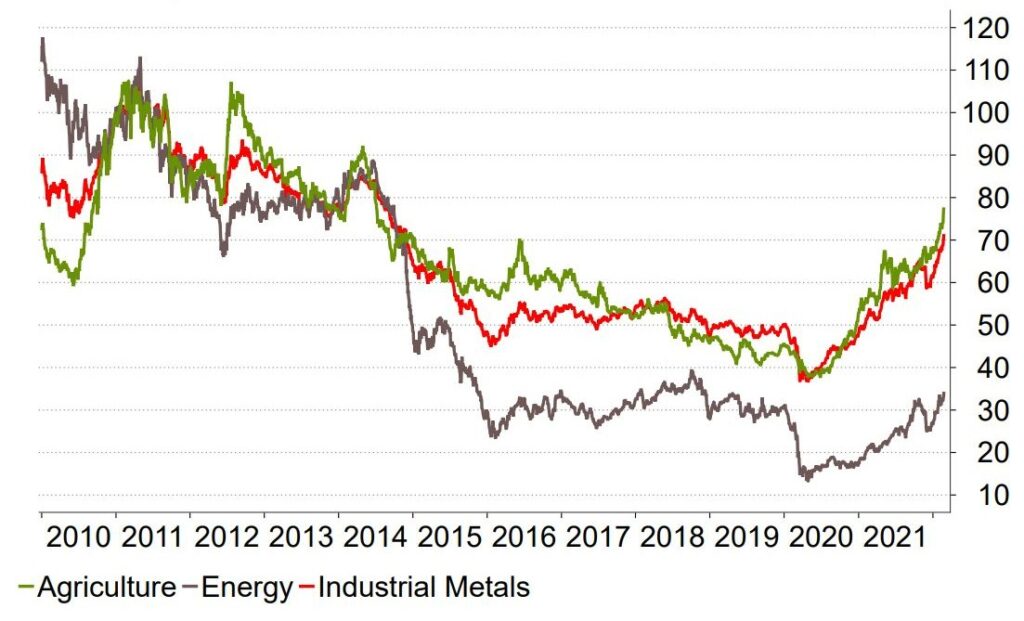 Commodities are, of course, not the only culprit behind recent inflation with prices of durable goods – such as household goods and cars – behaving very out of character, likely due to the aforementioned bottlenecks as well as import duties on China brought in by the Trump administration in the US.

As Chart 5 shows, the prices of goods normally fall year after year, again a consequence of China’s impact on the world since the 1990s when its export growth strategy was actively supported by the West. Even if that’s less likely in the new, less globalised trading system, productivity and new technology means that durable goods should not be adding much to overall CPI in normal times, and so we believe these price pressures will most likely revert beyond the bottlenecks. 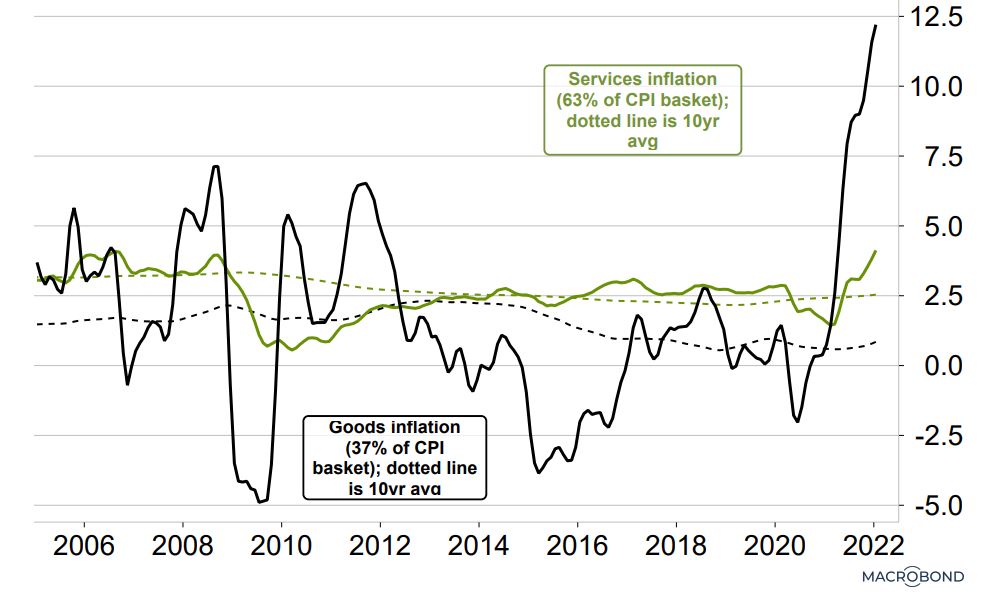 Most indicators suggest that inflation will fall back towards central banks’ targets as 2022 proceeds and supply chains normalise. As we’ve said already, a steady and moderate rise in prices is a sign of a healthy economy, and so we still expect generalised upwards cyclical inflationary pressures, but not at the levels we are seeing today.

We believe our view is vindicated by several forecasts. Chart 6 shows how bond market forecasts have not risen as high as headline inflation because there does not appear to be the belief that such high readings will last; ten-year bond markets are building in medium-term inflation at around 2.5%. The International Monetary Fund (IMF) provides a more dynamic annual forecast profile, with its predictions beyond 2022 showing inflation close to current bond breakeven levels. 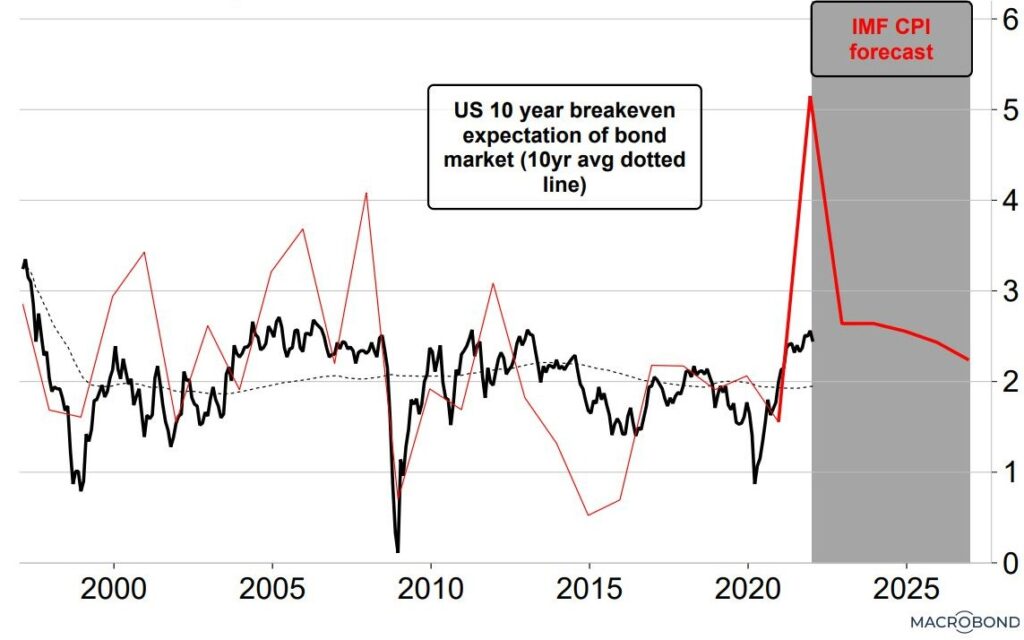 Additionally, the Federal Reserve and the Bank of England both have forecasts for inflation coming back towards their 2% long-term targets from 2023, in line with the IMF forecasts. 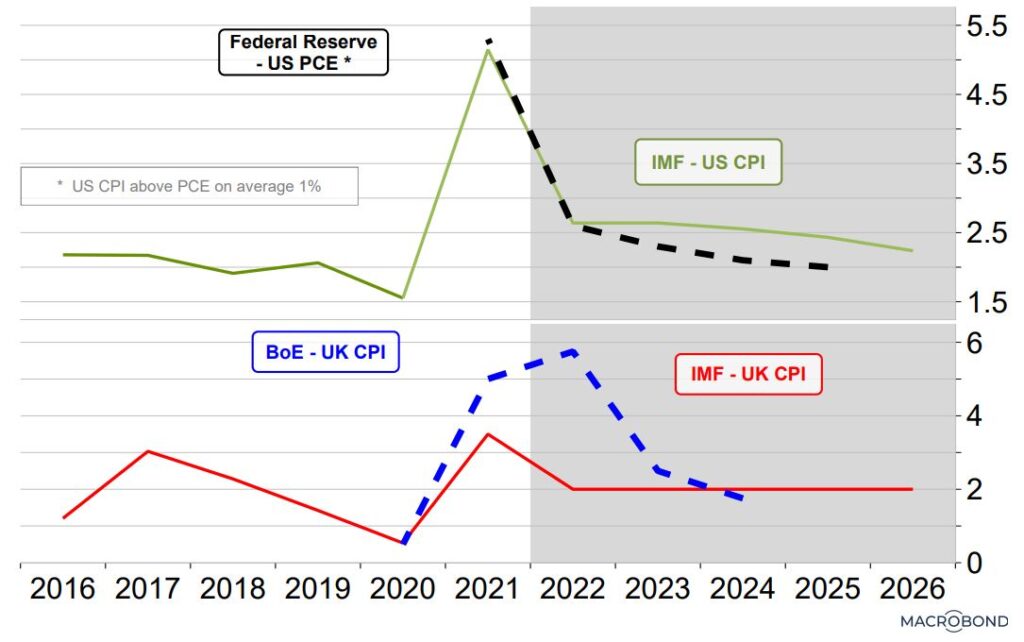 The price shock will pass

We close by reminding that a price rise is not the same thing as inflation. The post-pandemic reopening of the global economy has delivered all manner of price shocks, but central banks are determined that these do not become entrenched in the economic psyche, causing ongoing annual increases.

Central banks everywhere are setting about raising interest rates in response to healing economies and a well-established cyclical upswing. However, for the next couple of years, inflation will continue to remain above its decade average because global economies are in better shape and because inflation is a lagging indicator.

Central banks will take some encouragement from this ; indicating that the long healing process from the damages inflicted by the 2007/8 Global Financial Crisis is finally nearing completion. 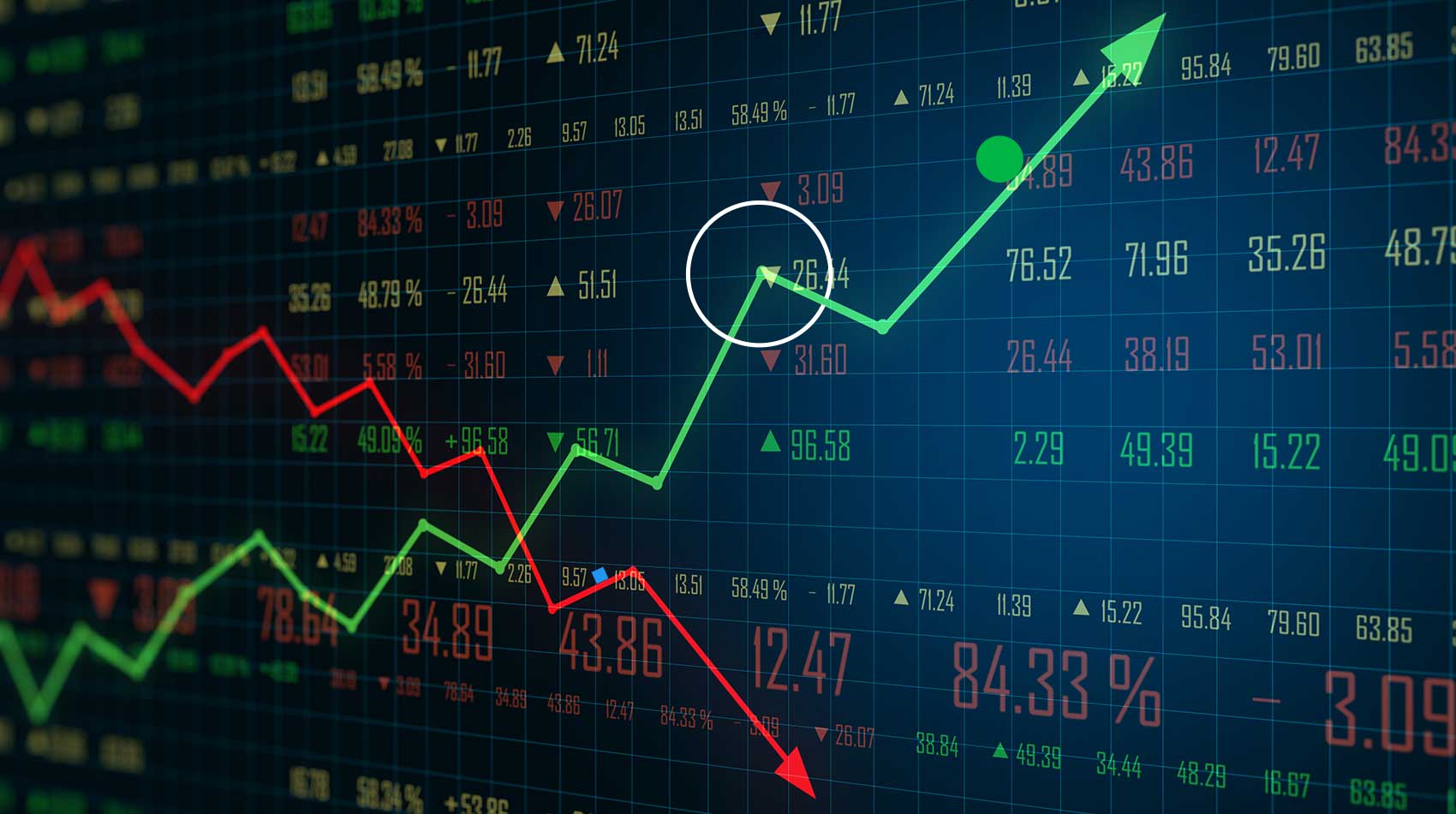