Financial markets endured turbulence in January, largely due to poor performance and instability in emerging markets. This has had an impact on the economy the world over, but the forecast for continued recovery this year still looks strong.

The decision in the US to scale back its bond-buying program (the stimulus package it has used since the financial crisis of 2008 to help support the economy) has been the main cause of the uncertainty in emerging markets – as shown the chart below.

In addition, the South African Rand has lost around 20% in value since May and South Africa, India and Turkey have all raised interest rates significantly to protect their currencies. There have been other contributing factors, such as a slowdown in growth in China, news that Argentina would devalue its currency by 15% and political turmoil in the Ukraine, Thailand and Turkey.

The effects have become quite widespread, filtering back into the more developed markets. In the UK for example, between 20th January and 5th February, the FTSE 100 was down around 5.5%. The worst hit market has been Japan, with the equity market down 12%.

Is it a good time to buy?

On many metrics, emerging market stocks look reasonably cheap relative to the past 20 years. Some people may think it’s a good time to invest in them on that basis. But, as a whole, we still don’t feel the current valuations are attractive when compared to the risks.

In contrast, we still believe that developed equity markets are in good shape. That’s not to say we can expect growth to be serene. Over the past five years, since the rally in global equity markets began, there have been periods of significant declines, sometimes around 10% or more. We saw a drop of this magnitude in May last year and we’re yet to climb back to those highs. But that doesn’t mean global economic recovery is under threat. It’s merely the ebb and flow of the markets and a long-term view remains essential.

The recent activity in emerging markets is likely to take a bit of a shine off global growth this year, but we had expected weak emerging market growth anyway. On the other hand, weak commodity prices tend to help developed economies, so the impact is not all negative.

Growth in the US appears to have hit a bit of bump in the road in January, partly due to the extreme cold weather, but we’re seeing encouraging signs in continental Europe and the UK is currently growing by more than 3%. So overall, we think the recovery is intact – global growth is accelerating. 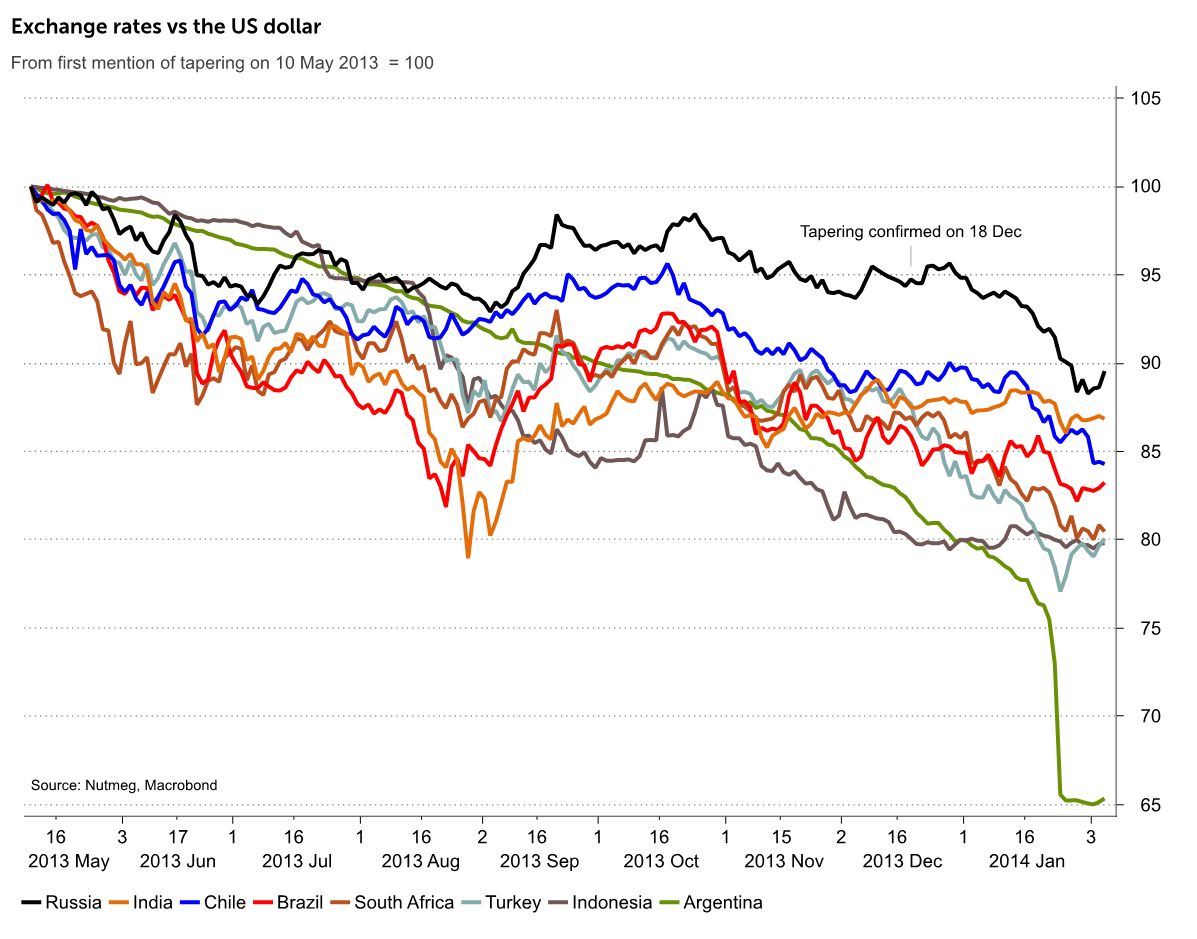 In June last year we decided to sell all investments in emerging market bonds and equities. We sold these investments principally because we forecast that Chinese growth would slow this year and also in anticipation of the US scaling back its bond-buying program, which, as we expected, has led to a rise in market interest rates, curtailing the flow of money into emerging markets.

We added more holdings in corporate bonds to our customers’ portfolios in January and this month we added some exposure to UK government bonds, partly as a degree of insurance should emerging market currency turmoil spread further. In higher risk portfolios we have taken the opportunity to add exposure to smaller companies in continental Europe.

In light of these recent market movements, we are comfortable with the way Nutmeg’s customer portfolios are orientated – that is, towards equity markets and mid-sized companies in Japan and Europe, and favouring reasonable returns from UK corporate bonds.

About this update: This update was filmed in February 2014 and covers figures for the full month of January unless otherwise stated. Data sources: Bloomberg and Macrobond.