Last year was one of good growth for equity markets, despite a sharp decline during the summer months, and we start 2014 with financial markets appearing to be in decent shape.

The strong finish to 2013 has continued into January and we’ve seen steady growth across Nutmeg portfolios, as global markets continue to reflect signs of a stable economic recovery. Equity markets have looked particularly strong since early December, largely due to a rise in Japanese equities and good performance from UK mid-sized companies.

As we look to the first few months of 2014, there are key factors in the US and the UK shaping our thinking. Firstly, the Federal Reserve – the central bank in the US – has now finally started scaling back its bond-buying program (the stimulus package it has been using to aid the markets following the 2008 financial crisis). The speed at which it does so will be an important issue for global markets but the main point here is that this process of ‘tapering’ is now underway and investors should be confident it will progress at a steady pace through the year.

As for the UK, growth looks likely to exceed 3% this year. This is positive news for equity markets. Meanwhile, the housing market is running too hot for the Bank of England’s comfort. On our valuation measure, house prices are around 30% above the average since 1960 relative to incomes, and above the peak of the last housing market cycle in the late 1980s.

Partly because of the housing market, there will be much speculation this year about potential increases in UK interest rates. We think the Bank of England will be reluctant to use interest rates to cool the housing market and is more likely to use other measures to slow mortgage lending – for example, limiting mortgages that are five times a person’s income.

We also think that the new Governor of the Bank of England will unveil some quite experimental policies this year. He is likely to announce that the threshold for even considering a rise in interest rate is unemployment under 6.5%, rather than the 7% previously stated, to make clear that a rise in interest rates is a long way off.

Overall, this means that UK assets will be moved by two forces – a stronger economy but also a central bank determined to keep expectations of a rate hike at bay.

In the light of this and reflecting the rise in government bonds yields over the past two months, we think that longer maturity bonds offer reasonable value at the moment. Yields in the UK corporate bond market are just over 4%, compared to 3.4% in the US and just 2% in the eurozone (as shown in the chart below). While this is much lower than figures we’ve seen historically, with the outlook for low inflation globally and the Bank of England likely to continue to keep interest rates low, corporate bonds offer reasonable value in the current landscape. As a result, we added more bonds to Nutmeg customers’ portfolios in early January. 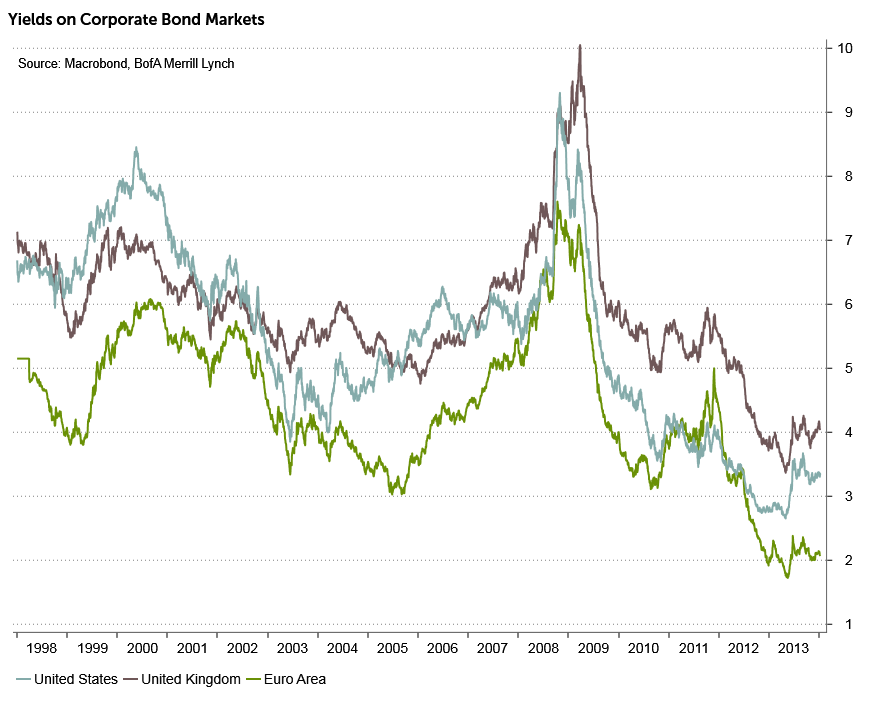 On equities, we are optimistic for 2014, largely because of the positive signs of growth in the UK and US. We maintain considerable equity holdings in Nutmeg portfolios, especially in mid-sized companies in developed markets.

Emerging markets are still having a torrid time and we will continue to avoid these for now, with the exception of Korea, which we regard as somewhat of a safe-haven in the spectrum of emerging markets.

About this update: This update was filmed in January 2014 and covers figures for the full month of December 2013 unless otherwise stated. Data sources: Bloomberg and Macrobond.