We’ve been very watchful of events in the Ukraine of late where economic turbulence has been gathering pace alongside the political unrest. However, aside from sharp declines on 1st March 2014, the financial markets have so far been largely unaffected and we’ve actually seen good returns from stocks and bonds in recent weeks, contributing to solid gains in Nutmeg customers’ portfolios during February.

The impact of the Ukraine

Ukraine is important as it’s a gateway to Europe. For example, Germany imports almost half of its natural gas needs from Gazprom, the Russian state energy company, via the Ukraine. Natural gas prices have spiked recently as a result of the uncertainty, but not significantly.

Despite a fall in stocks on 1st March, as Russian soldiers took over the Crimea, so far markets have largely shrugged off the tensions. In fact, small company stocks in the US are actually at record highs. That may seem like complacency on the part of US investors but in truth the US is far less dependent on the rest of the world for its energy supplies than it used to be.

We’ll continue to pay close attention as events unfold in the Ukraine, primarily because if it leads to trade sanctions or even conflict, this would clearly be very disruptive to European growth and negative for financial markets the world over.

Before the recent political crisis, the Ukraine was already suffering an economic crisis. Since May last year, the country has lost around one-third of its foreign currency reserves – this is a clear signal of a country in trouble. But it’s not the only one.

We have also been keeping a close watch on developments in emerging markets over the past six months. The likes of Venezuela, Argentina and Nigeria have seen sharp declines in currency reserves and Russia itself is in difficulty too, with a rapid fall in the rouble forcing the Russian central bank to raise interest rates. 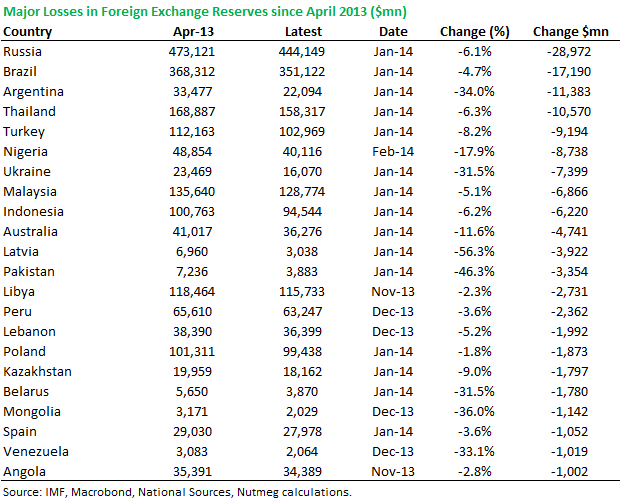 Every emerging market is different, but any weakness in individual countries is being exposed by investors moving capital back to developed markets right now. Some big developing countries will be in recession – or close to it – this year, such as Brazil and Turkey.

We are especially interested in what is happening in Thailand and Venezuela as events there could pose wider risks to global markets. But for now, we see a limited risk of contagion – that is, events in emerging markets spreading to developed markets.

As often is the case, the key influencers of global market trends at the moment are the US and China.

Economic data in the US has been very poor so far this year, but this seems mostly linked to harsh winter weather. Data in the coming weeks is likely to show a rebound in activity and a return to solid growth, so we believe prospects in the US for the year ahead look broadly positive.

In China, things are a little different. The Chinese government is trying to introduce significant reform, such as controlling lending from outside the banking sector, while sticking firmly to its growth target of 7.5% this year. That could be a tall order. So, weak growth and uncertain policy means China represents something of a risk that we need to carefully monitor. 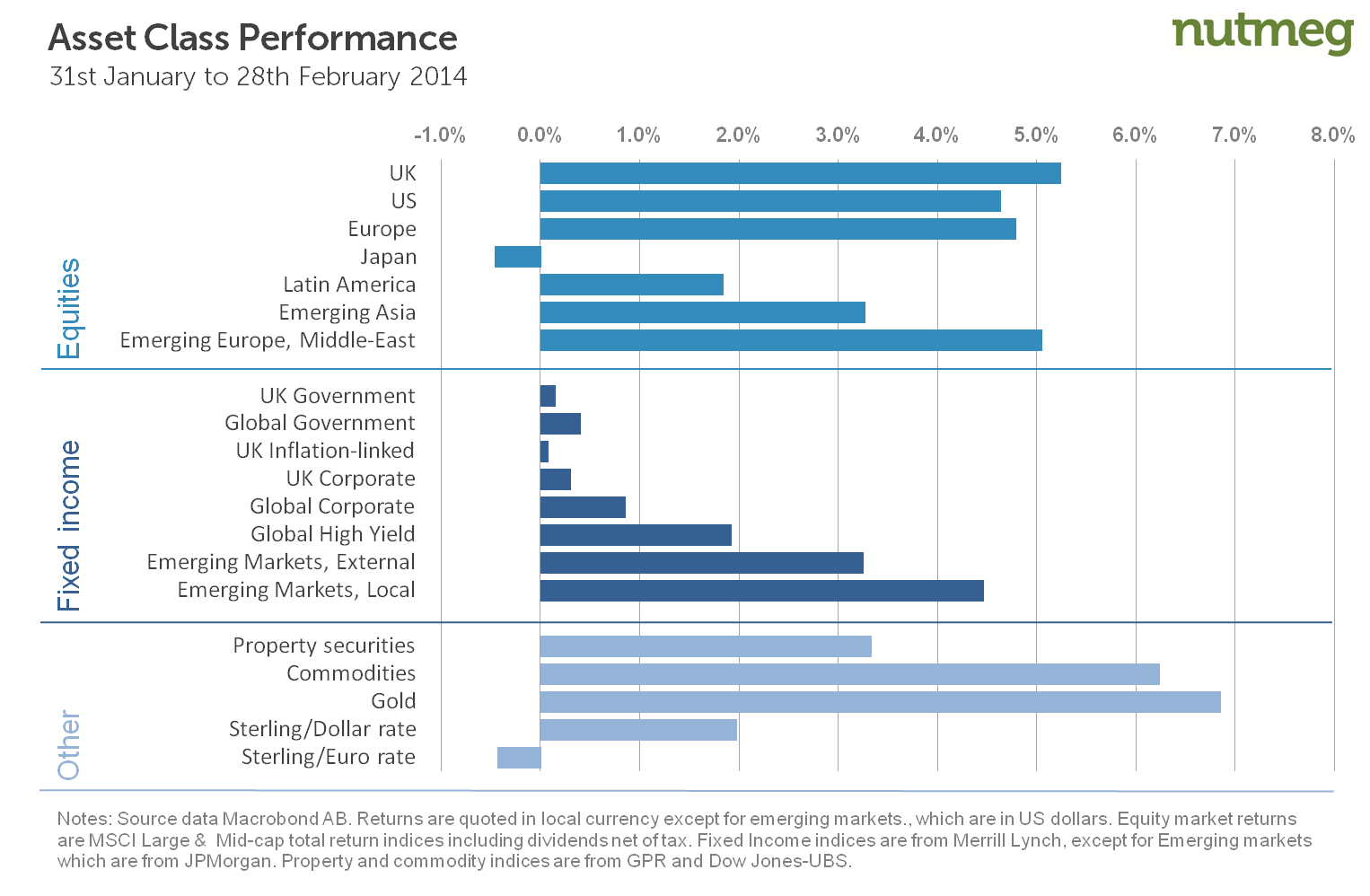 Meanwhile, here in the UK, following the release of the Bank of England’s latest inflation report, analysts now expect interest rates to rise before the general election in May 2015. In fact, we believe there is a good chance of an increase a lot earlier than that, given the strength of the economy and escalating property prices.

At Nutmeg, we increased our customers’ portfolio exposure to longer maturity corporate bonds in January and to government bonds in February, both measures as a degree of insurance against turbulence in emerging markets. After a good rally in bonds this year, we think it makes sense to take some profits from these areas, so we have more recently reduced exposure to longer-maturity corporate bonds and government bonds.

In equities and property, we’re still very happy with the investments we have in place. Medium and small-sized company shares have out-paced large company stocks this year, as they did in 2013.

Our more high-risk portfolios, where we have invested in opportunistic developed markets instead of emerging markets, have performed well. For instance, we added Italian stocks to portfolios in November and Italy is one of the best performing markets this year with good gains in January and February (as shown below). 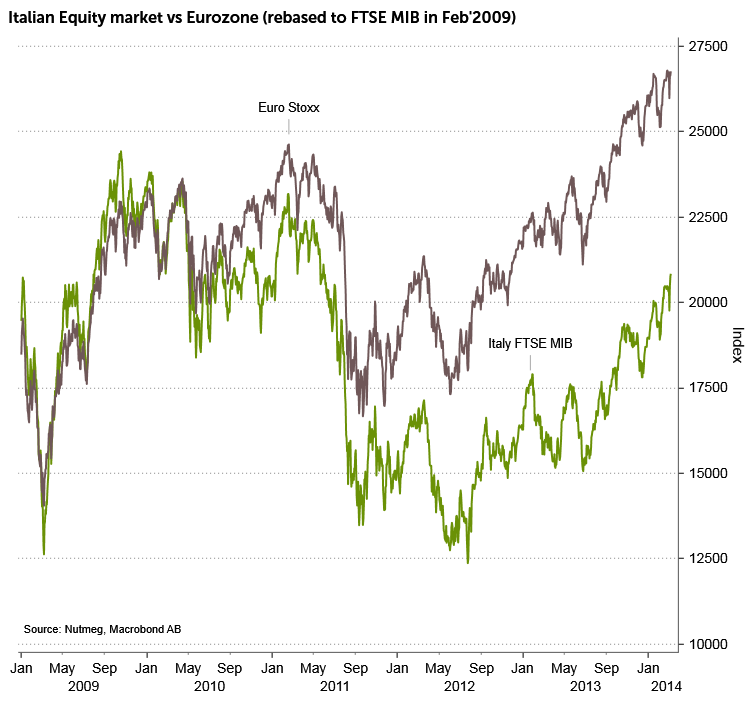 About this update: This update was filmed in March 2014 and covers figures for the full month of February 2014 unless otherwise stated. Data sources: Bloomberg and Macrobond.