It’s been four years since Abenomics came about and, finally, the chances of it succeeding are looking brighter – along with Japan’s economic future. This is good news, not just for Japan but for Prime Minister Abe and the upcoming elections.

The Japanese economy has been struggling with deflation since 1989, when its property bubble burst and threw the country into financial crisis.

In the three decades since, households and businesses have been cautious about taking on new debt, while the sense of economic decay has been compounded by the country’s ageing population (older people are less likely to take out loans).

Corporate Japan’s decision to outsource most of its previously world-beating export supply chain to other parts of Asia, together with a relentless pursuit of austerity by successive governments, added to the economic slump.

But in 2013, shortly after being elected for his second term, Prime Minister Abe introduced a new economic policy – so-called Abenomics.

Abenomics, which is based on three ‘prongs’ (quantitative easing, fiscal stimulus and structural reform), was supposed to revive growth and end the deflationary spiral.

Finally, Abenomics appears to be working

The most visible element of the policy was the Bank of Japan’s massive cash injection into the economy (quantitative easing).

The chart below shows how dramatic this was – a 60% of GDP boost over four years. 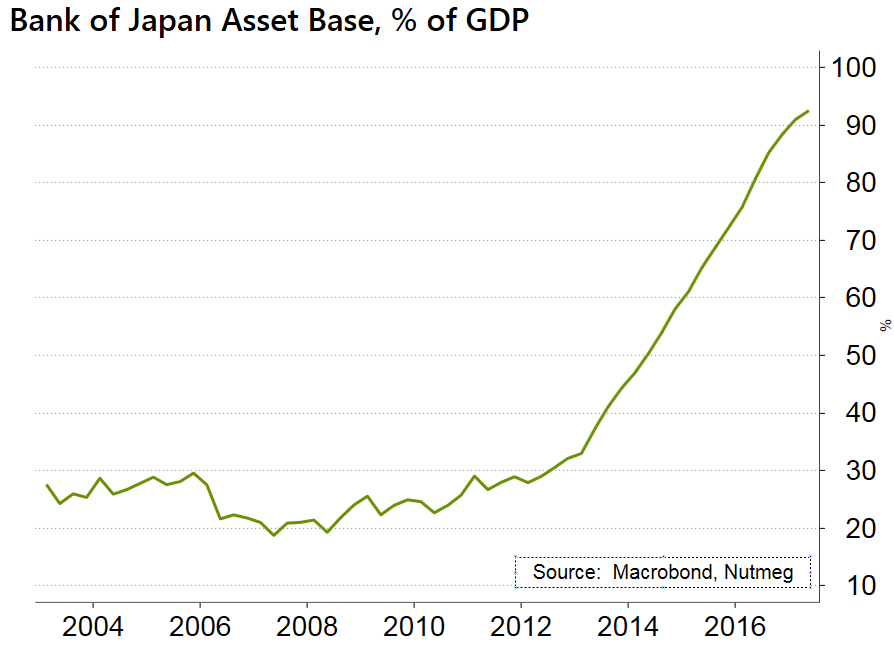 Unsurprisingly, pumping this amount of money into the economy has had an impact. But it’s taken a while to work through the economic fabric of a very conservative nation.

The most immediate impact was a weaker currency. The chart below shows that, in real terms, the currency fell by more than 30% from late 2012 through to 2016. The weaker currency, as intended, improved the outlook for Japan’s exporters. 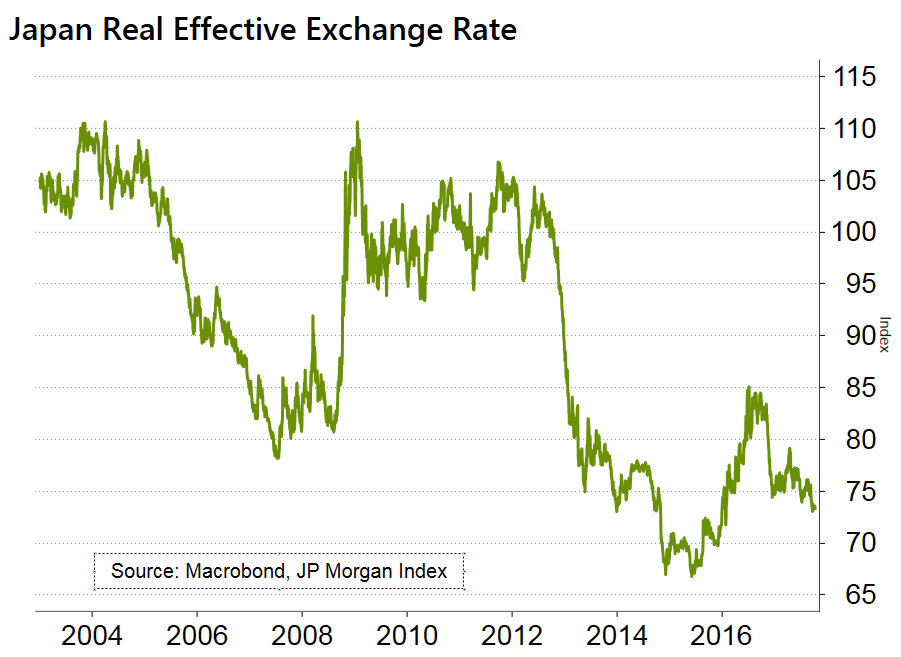 However, critics of Abenomics feel the policy hasn’t worked – it was meant to revive growth, yet the Bank of Japan’s inflation target remains out of reach.

But, recently, we’ve begun to see more dramatic evidence of Japan’s economic recovery. For example, businesses are expanding their own balance sheets; a sure sign of increasing business confidence. 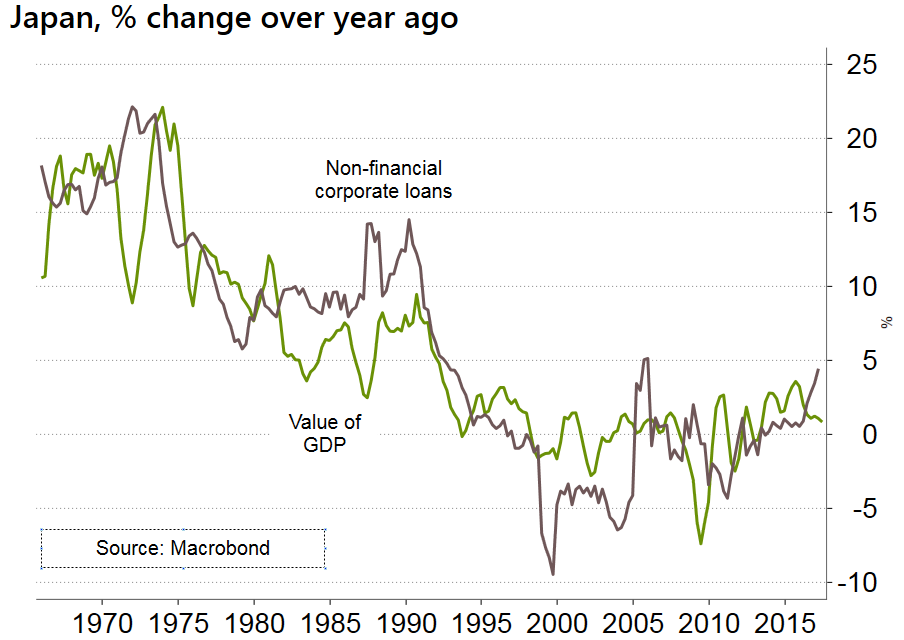 Corporate loans are growing faster than the economy for the first time since 2009. And, apart from a brief period in 2005, lending growth is the fastest it has been in over 25 years.

Furthermore, house prices are on the rise. This is perhaps the most convincing evidence in support of Abenomics. 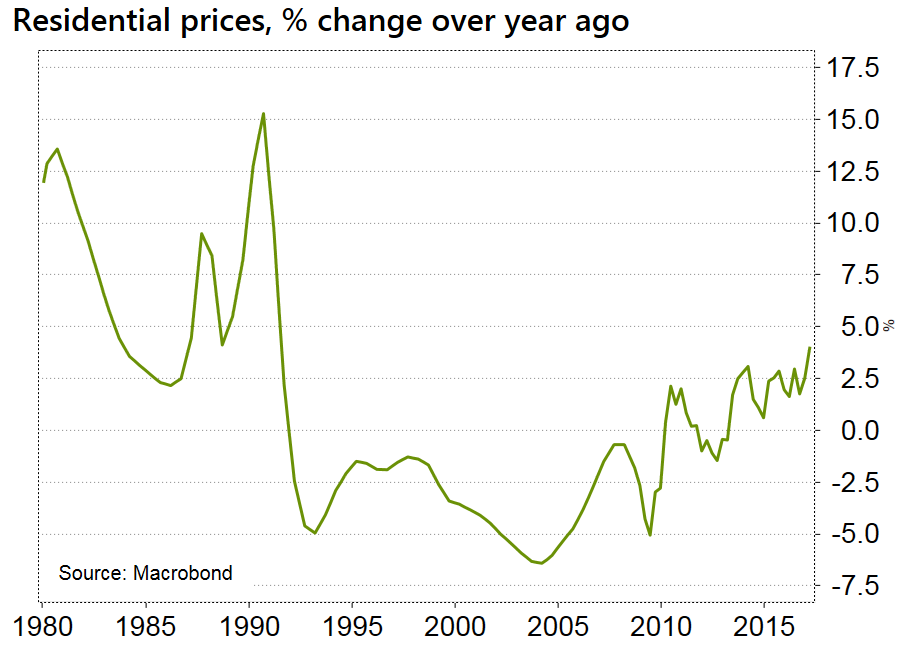 Annual growth is not stellar, but it is the highest seen since the 1989 crash (as shown in the chart below).

Just in the nick of time?

And so, it appears Abenomics is working at last. Which is good timing for Prime Minister Abe – he’s hoping to be re-elected on 22nd October.

His chances appear to be good, particularly since Tokyo Governor Yuriko Koike decided not to stand. But it’s predicted that she’ll be a greater threat in the 2021 election – perhaps a sign that conservative Japanese politics is being shaken up and there’s a more dynamic future for Japan. Constitutional reform will be a key element of future policy.

For some time now, we’ve held an overweight position in Japanese equities in our fully managed portfolios, although we’ve preferred not to take exposure to Japan’s currency. We’ll continue to monitor market developments, but for now, we expect these positions to add value to our portfolios.

Assuming the upcoming election sees Abe return for another term as prime minister then, along with a stirring corporate Japan, this could help entrench much-needed new dynamism in the land of the rising sun.