Chancellor Rishi Sunak’s announcement on 24th September, that from November the government will provide a Job Support Scheme, essentially covering a third of valid job wages, represents a dial down from the more generous furlough scheme that had been in place. However, despite the clear setbacks of the pandemic, this decision may have been informed by still resilient official labour data. Ongoing labour market healing is key to a well-founded economic recovery. 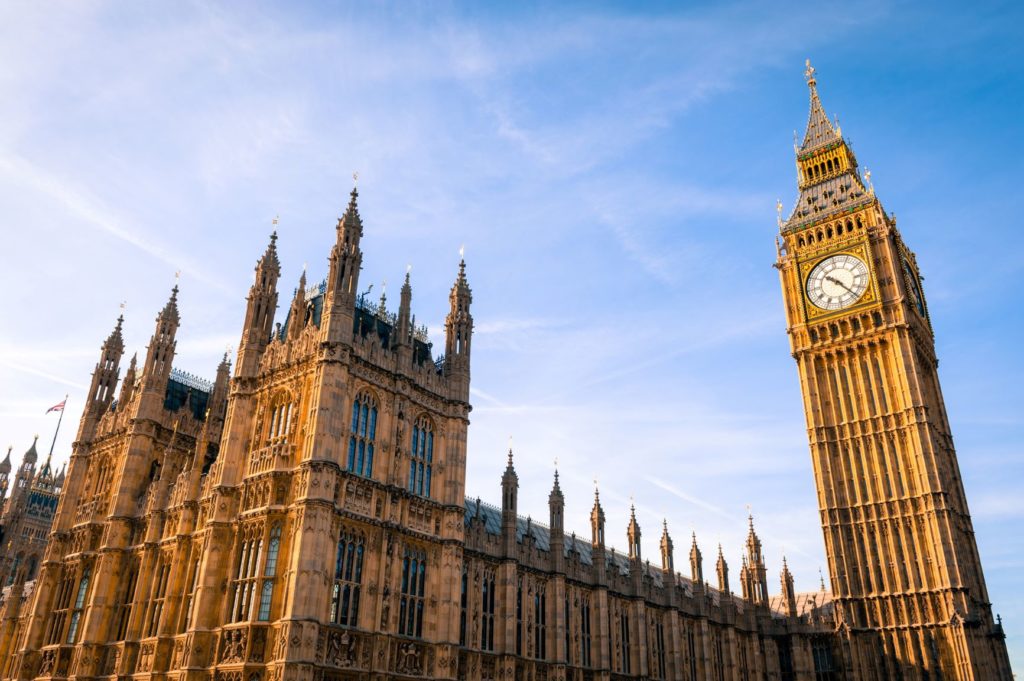 It’s worth examining the employment figures that will have informed Chancellor Sunak’s decision. From them we can see that this latest stimulus should be seen as cautiously optimistic, rather than pessimistic and that the UK labour market is more resilient than most give it credit for.

The Office for National Statistics has reported data suggesting the number of people in work fell by 695,000 between March and August 2020. From a labour force of approximately 32.84 million that is nearly a 2% drop; however, it is yet to materialise in the latest official data for July, released September 15th and incorporated in the chart below. 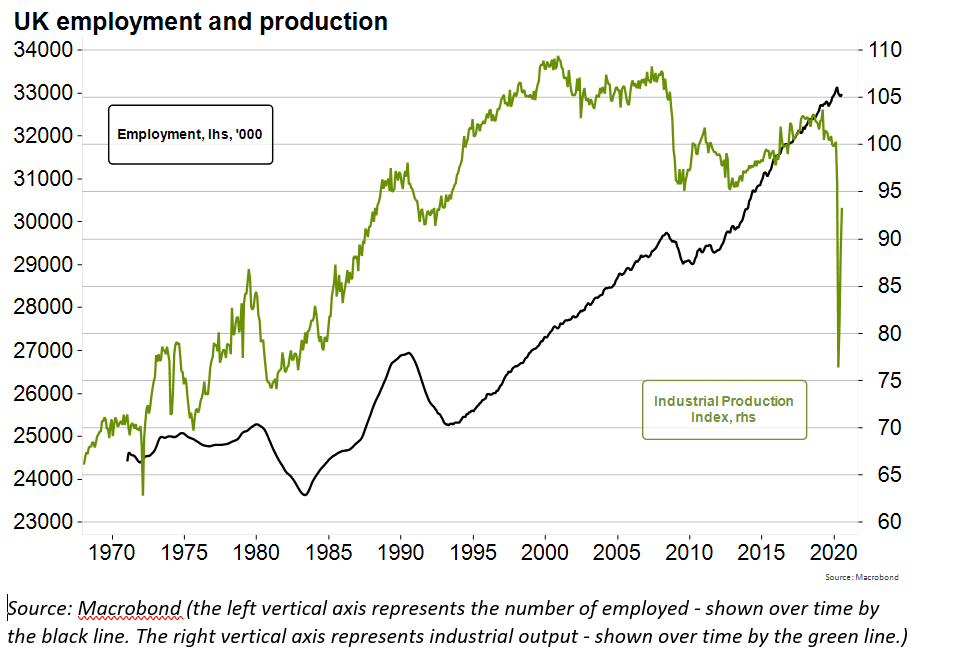 It is widely anticipated that, unfortunately, as the government’s furlough scheme tapers down between August and October 2020, larger losses will be seen in employment levels. Indications from the British Chamber of Commerce in April were that 66% of companies used the furlough scheme, more recent estimates by the National Institute of Economic & Social Research suggest 9.5 million employees were covered by the furlough scheme – just under 30% of all payrolls. So, what are the near-term prospects for the UK labour market, and what does this mean for the UK economy?

What will employers do next?

The furlough scheme tapers off from 1st August to 31st October, though the government is offering a £1,000 bonus for every furloughed worker that companies keep on the payroll until January 2021. Some companies have already said they will not need this assistance. At the time of writing, the government was re-establishing operating limits on the hospitality industry to minimize the spread of infection. Further limited and targeted subsidy arrangements may prove necessary as official guidance swings back to encourage working from home.

Hours worked was cut by just under 20% during the first full lockdown (Chart 2), directly in line with the temporary drop in industrial production (Chart 1). However, July’s industrial production levels then regained almost two-thirds of that loss and August output indicators show that the net balance of businesses expects continued recovery (Chart 3). July’s hours worked data has only begun to reflect this recovery with the lower panel of Chart 2 illustrating that, as of that month, actual redundancies were not as severe as those following the 2008 global financial and trade crisis. That was, after all, the whole point of the furlough scheme: to provide a short-term buffer for a short-term shock. But we are not out of the woods yet. Unpublished data shows that corporate redundancy ‘plans’ are significantly above the ‘actual’ redundancies that were seen in the 2008 crisis. 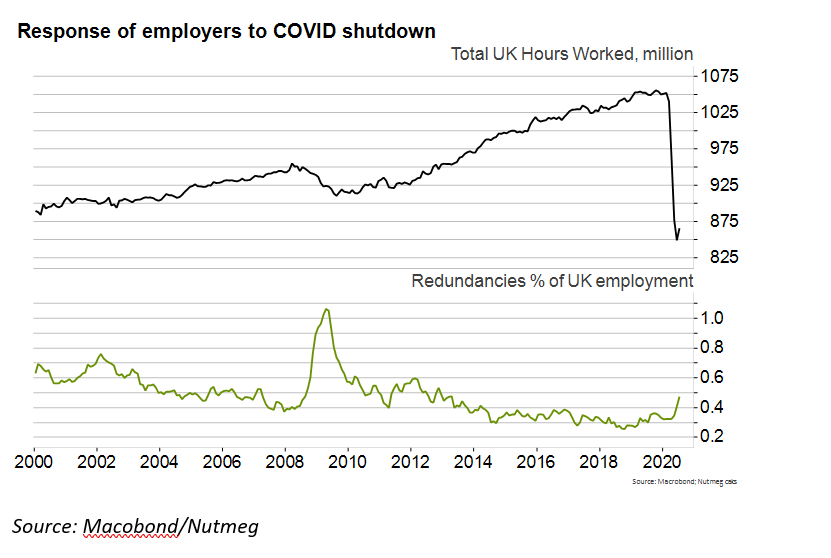 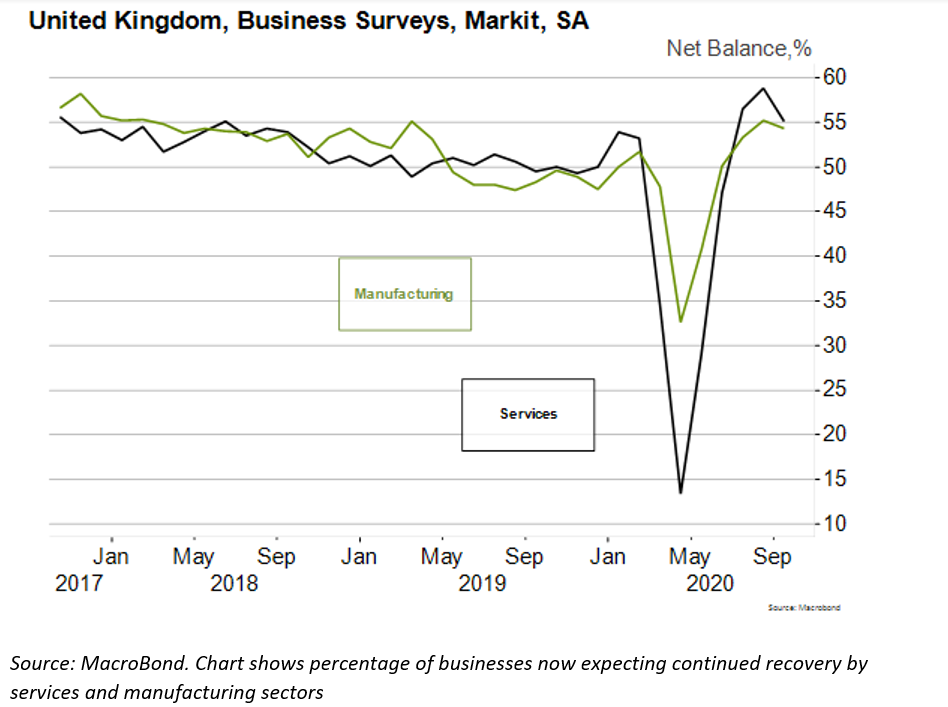 So, will the shock turn-out to be short term? The latest (August) Business Survey of Employment Intentions from consultancy BDO seems to offer some hope (Chart 4). On this evidence, and the business surveys shown in Chart 3, business responses don’t seem to be that pessimistic. That may, of course, change. But the comparison with the 2008 crisis is quite informative. Clearly, there are segments of the services’ sector that are suffering (retail, hospitality, travel) but the general business employment picture has yet to deteriorate significantly. In terms of UK industrial production, it took four years to recover two-thirds of the 2008 production slump (Chart 1). This same reversal margin was achieved in just three months in 2020. This extraordinary fact must be ‘front of mind’ when we think about the future. Simple comparisons across data of 2020 with 2008 will simply not be good enough. 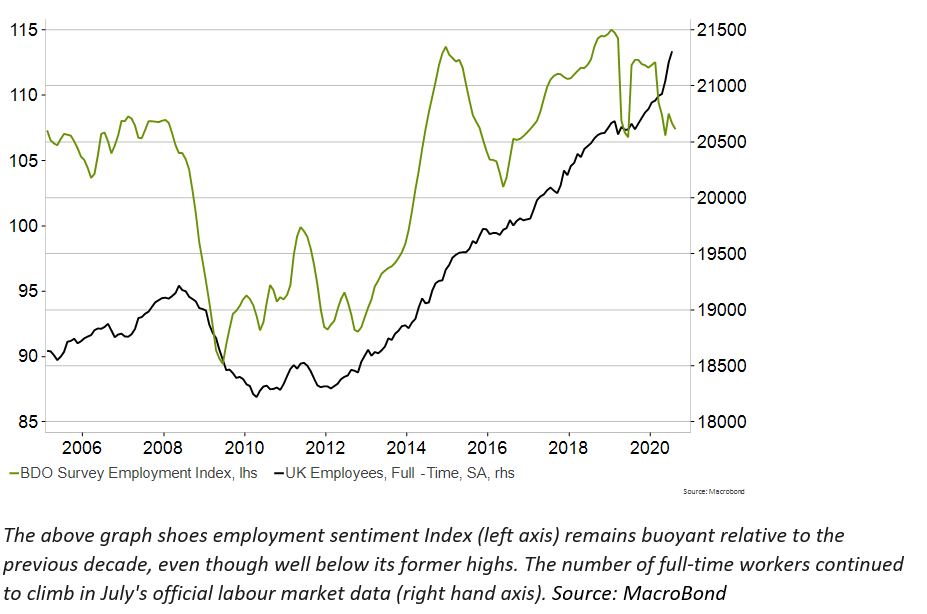 What will households do next?

Household income and spending is, of course, dependent on job security and wage growth, as well as household savings. Chart 5 shows a steady household savings rate over recent years – this year’s forced home-confinement has helped some to top-up personal savings. That spare capacity may help to offset the much weaker wage growth that has developed in 2020 (Chart 5). Meanwhile, the unemployment rate has not spiked yet, although rises should be expected as furlough payments are withdrawn and some redundancies inevitably fall between the gaps of that support and the new Jobs Support Scheme. 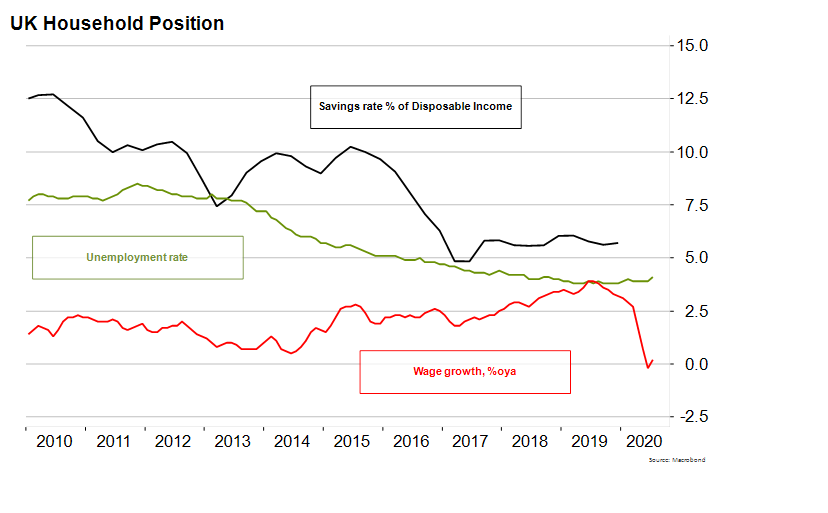 Meanwhile, weaker wage growth and job market uncertainty has not hampered the summer rebound in consumption and the housing market (Chart 6). Consumer behaviour warrants even closer scrutiny into year-end than normal. 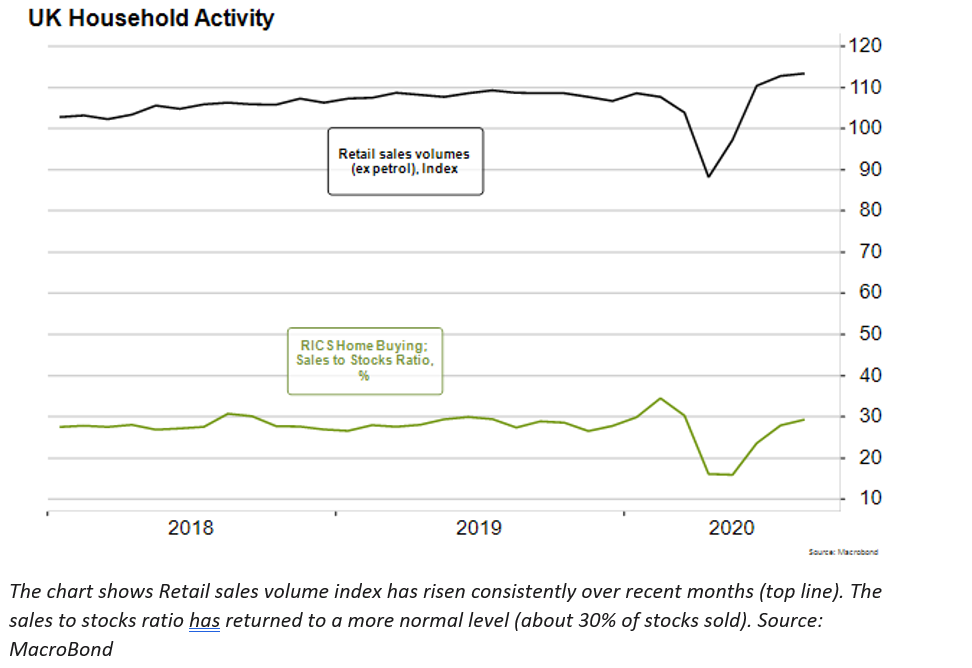 The chart shows Retail sales volume index has risen consistently over recent months (top line). The sales to stocks ratio has returned to a more normal level (about 30% of stocks sold). Source: MacroBond

Where to next for the UK economy?

The data presented here is tinged with hope, there has been a surprising resilience to the UK economy. It is, of course, too early to be definitive and Brexit continues to loom over the horizon. However, there is a non-trivial chance the UK economy is more adaptable than most observers give it credit for. In the absence of a major Brexit shock, the UK should be well placed to capitalise if (as we suspect) the global economic recovery is sustained.

Labour market recoveries are critical to our global – as well as our UK – view. Given better recent news on this front, ongoing government policy support for economies and less uncertainty around the way governments will respond to further Covid flareups, we have increased customer equity exposure back to their long-term normal levels. However, we remain underweight in the UK, albeit less so than previously. The unknown Brexit outcome remains the key reason for this underweight UK position. As ever, the Nutmeg investment team continue to monitor all data and policy developments and stand ready to adjust portfolio settings as appropriate. 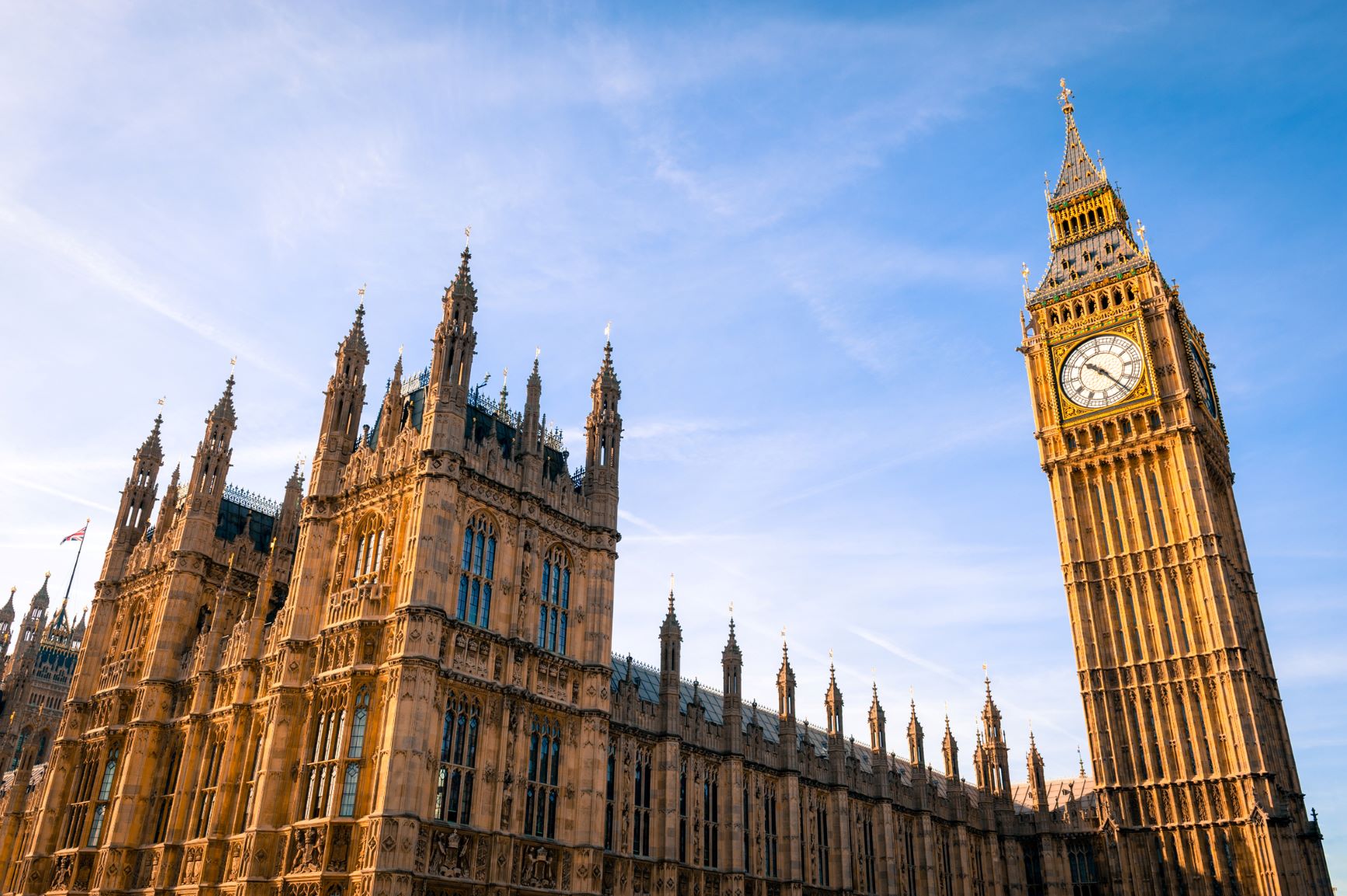