Markets in October 2018 – just how bad was the ‘correction’?

Seasonality can be an important theme in the markets, and October can often prove to be a tricky month. This particular October joins a much broader roll call of bad months for global markets. Here’s a look back at how the story unfolded and what it means for markets over the weeks and months to come.

World stock markets lost 7.8% in US dollar terms over the month, based on the broadest measure of global equity performance1. At one point, global stocks were down 10%. October 2018 ranks as the 22nd worst month for stocks since 19702, in the bottom 3.8% of all months.

Coincidentally, the two worst months on record were also in October (1987, 2008) although August and September have more commonly seen the majority of large declines. 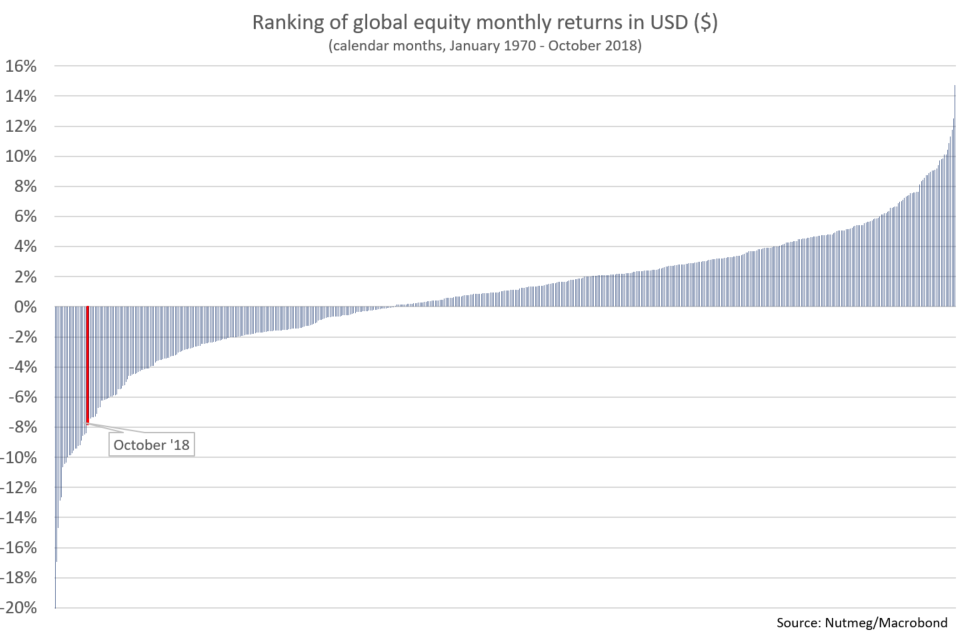 Notes on a tough month

There were some notable points that emerged as the markets endured such extreme volatility.

What caused the sell-off?

As we wrote earlier in the month, comments from US Federal Reserve Chairman that the Fed ‘may go past neutral’, in effect saying that they would raise interest further than expected by the market, had led to higher bond yields.

At the same time, expectations for economic growth appear to have declined somewhat, even though current US growth indicators have remained robust.

In short, neither the small rise in bond yields nor the reduction of growth expectations appear significant enough to prompt such a big fall in global stock markets.

There are also some of things that we observe which are important.

Overall, we think the sharp sell-off in October looks more technical in nature, rather than due to a change in the long-term outlook for global stock markets.

There are some positives to take forward

Looking to the rest of the year and beyond, there is cause for optimism.  Sales and earnings are growing strongly in the US: third-quarter earnings from 77% of US S&P 500 have beaten estimates, with earnings on course for 26% growth over a year ago, and a further 10% growth is forecast for 2019.

On balance, we don’t think the outlook for global markets should be entirely clouded by the poor performance seen in October. Your portfolios remain positioned to make the most of the opportunities that emerge, and we’ll continue to track them closely over the coming weeks and months.

Other sources as indicated