Nutmeg investment outlook on the US election

With an outcome that will shape the near-term political agenda of the world’s largest economy, the US election is as important to markets, finance and investing as it is to geopolitics; not least in the midst of one of the sharpest economic downturns in history and a global health pandemic. It is therefore worth us explaining our view on the US and how and why we have the investment outlook we do. 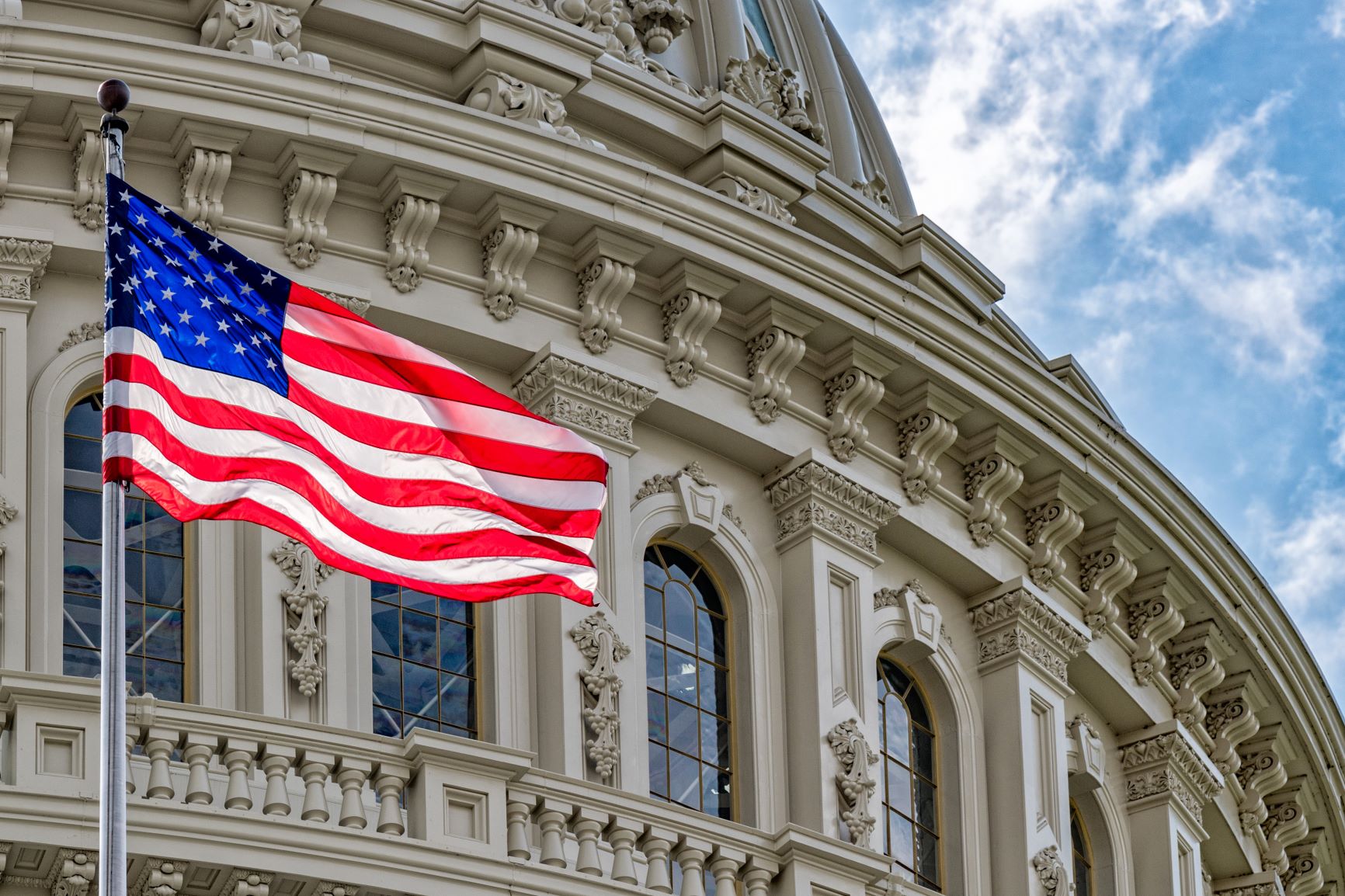 Currently, markets seem relatively calm ahead of the vote on November 3rd. This is partly because they are entering a wait and see period, although as discussed in our investor check in there are a number of other, more specific factors to consider.

Firstly, whoever wins we expect US lawmakers to pass a further fiscal support package. Given the global pandemic and resulting recession, both Republicans and Democrats are clear on the need to keep the money flowing – the difference simply being the degree to which it may flow. This is good news for investors because it will help in securing a robust economic recovery and, in the near-term at least, will buoy equity markets.

Secondly, although the press have spoken of a ‘blue wave’ bringing Joe Biden to victory, in order for the Democrats to have the free hand to be able enact their legislative agenda, they will need a majority in the House of Representatives (currently the case and appears very likely at this stage) and in the Senate (where the race is much closer, and will come down to a small handful of seats). So whilst polls would currently suggest that we will be welcoming a new president to the White House come January 2021, the race for the Senate is of paramount importance , as with a split Congress the Democratic agenda will face major hurdles in becoming a reality.

The current impasse over stimulus is a window into an extended division in Congress, where policy progress for the US is persistently hampered by tribal affiliations. Despite this, Democratic administrations are typically perceived as less business friendly and a divided congress will lead to the conclusion that the current Republican administration’s commitment to lower taxes and deregulation will remain in place for the near-term, regardless of who is President.

Meanwhile, the financial market reaction to Mr. Biden taking a significant lead in polls earlier this month has not been the negative catalyst that some investors expected. While a Democratic regime may herald higher taxes in the medium-term, the current economic environment likely prohibits aggressive policy action here in the near-term. The Democrat commitment to infrastructure spending and fiscal stimulus, alongside a more diplomatic approach to trade tensions, is outweighing  any medium term risks in investors minds.

Ultimately, in the current economic environment, party policy has to take a backseat to health and economic policy, and whoever is president is going to do everything in their power to ensure a robust and sustainable economic recovery in the US.

So what are the major policy implications of a second term Trump, or Biden presidency?

Significant tax change is a clear policy anchor for Biden, though he has committed to not raising taxes on households with incomes below $400,000. Instead, most of the proposed increases would affect high income households and corporations, resulting in a net increase in government revenue.

The bulk of this increase, about two-thirds, would come from a proposal to lift the corporate income tax rate to 28%, from the current 21%. Whilst this sounds a steep rise, investors need to remember the highest corporate tax rate was set at 35% prior to the 2018 tax reform program. Other Biden proposals that would raise revenue from corporations include a 15% minimum tax on book income and a doubling of a minimum tax on foreign income to 21%, up from 10.5%.

However, despite a heavier corporate tax bill, there is a plan to use fiscal stimulus to help small businesses: Biden plans to launch a “Made in America” tax credit. The 10% tax credit would be available to companies that make investments for various purposes such as revitalizing closed or closing facilities, bringing production or services jobs from overseas to the US, expanding or broadening domestic facilities, and expanding manufacturing payroll.

Taxes apart, Biden has staked a tremendous increase on state aid, vowing to spend “whatever it takes” to extend loans to small businesses and increase direct money payments to families. Among the proposals are an additional $200 in Social Security payments per month and $10,000 of student loan forgiveness for federal loans. He also plans to raise the federal minimum wage to $15 (£11.50) an hour, compared to the current $7.25 Trump supports.

Biden has endorsed the Health and Economic Omnibus Emergency Solutions (HEROES) Act. This policy, if passed by a Democrat Senate, would allocate $915bn in funds to state and local governments through the Coronavirus Relief Fund, a substantial increase on the $150bn in funding provided in the CARES Act. The critical variable here is that the size of any further stimulus package could be tied to November election, which presents a negative case for a divided Congress given the difficulties faced in agreeing further stimulus packages thus far.

In contrast to Trump’s denial of climate change science and backing of fossil fuels such as coal, Biden has outlined a ‘clean energy revolution’ and believes the ‘Green New Deal’ is a crucial framework for revitalising the US energy sector and addressing climate risk.

The scope of this is large. Biden is promising net-zero emissions by 2050 and to electrify the US’s transportation sector, installing a vast network of new car charging points, upgrading the grid and deploying utility-scale battery storage across the US. Biden’s climate and environmental justice proposal will make a federal investment of $1.7 trillion over the next ten years, leveraging additional private sector and state and local investments to total to more than $5 trillion. He has also pledged to extend the tax incentives for wind and solar renewable energy projects and to further support other energy efficient infrastructure.

As well as these policy diversions, we also identify a number of policy similarities that would be largely consistent with the status quo and how that is priced by the markets.

The Trump administration is conducting a wide-ranging antitrust probe into major tech companies but has so far stopped short of calling for break-up of these businesses, though Trump has previously described their market share as monopolistic.

Biden has also been critical of Big Tech’s market power, despite the Obama administration being seen as tech friendly.

Biden has stated he would support stricter antitrust oversight and online privacy rules, saying the U.S. should set privacy “standards not unlike the Europeans,” an apparent reference to the European Union’s stringent General Data Protection Regulation (GDPR). He has also acknowledged antitrust enforcement hasn’t been rigorous enough. He was the only Democratic presidential candidate who called for revoking Section 230 of the Communications Decency Act, a key internet law that largely exempts online platforms from legal liability for users’ posts. Trump echoed that same position on September 8th. Biden’s motivations are in part driven by social aspects. Job protections for gig workers, and aid for workers who have been ‘displaced by tech’.

The hard line the US has taken on China in recent years is likely to continue no matter who is President. The Trump administration’s approach has been criticised in its zero-sum, confrontational nature but, according to the WSJ, Biden’s administration ‘share the Trump administration’s assessment of China as an authoritarian rival intent on disrupting the American-led global order’.   Biden is even running TV ads accusing Trump of being soft on China.

This underpins a geostrategic view in both camps. Like Trump, a Biden administration is likely to continue efforts to reduce American dependence on Chinese manufacture of critical goods and to compete with China in strategic sectors such as artificial intelligence and next-generation 5G wireless networks.

However, there is a difference in tactics: Biden is committed to diplomacy and wants to find common ground, working with China to combat climate change, while winning and mobilising allies to coerce and counter growing Chinese influence globally.

There is further nuance in how Biden would conduct macroeconomic policy, focused on decoupling in key sectors rather than Trump’s broader decoupling.

Whatever happens after November 3rd, the Nutmeg Investment team are ready to ensure your portfolios are in the best position to take advantage of potential market movement.