In this month’s investor update, Nutmeg personal finance specialist, Annabelle Williams, speaks with our chief investment officer, James McManus, about changes to the portfolios in July. They discuss why markets rallied during the month, despite raised fears of recession, and the latest in central banks’ stance against rising inflation.

After a tough year so far for risk assets, July proved to be a better month for markets. What’s been behind this rebound?

Indeed, yes there has been a broad-based rally in stock markets to begin the second half of the year, though this must be tempered by more mixed economic news as the month unfolded.

Arguably the most notable macro data of the month saw US gross domestic product (GDP) fall by 0.9% on an annualised basis in the second quarter of 2022, following a drop of 1.6% in the first three months of the year. Two quarters of consecutive decline in GDP growth meets the common test of a technical recession in UK terms, but not in the US where the definition is broader and considers a wide range of economic metrics. It’s worth noting that this is just the preliminary reading, but it still reflects an expectedly weaker US economy last quarter – if only a shallow dip into negative growth.

Despite this news late in the month, US equities, and global equities more broadly, climbed during July. Over the course of the month, the S&P 500 was actually up by just over 9%, while in the UK the FTSE 100 climbed by 3.7%.

So, what’s behind this market optimism? Well, the second-quarter earnings season has started strongly for one, but also in a paradoxical way the more mixed data on the US economy sponsored a belief that central banks, such as the US Federal Reserve, will be more cautious in raising interest rates in fear of choking off growth any further.

Rising inflation is still a huge concern, of course, though a slowing in the pace of economic growth should serve to dampen some price rises. But Fed chairman Jerome Powell’s July comment that it will likely “become appropriate to slow the pace of increases” in interest rates reflects the need for the central bank to tackle inflation while managing disruption to growth.

Are we nearing the end of the interest rate hike cycle in the US?

We think it’s much too early to say that, and markets still expect a further four interest rate hikes in the US this year. This is despite the Fed and other central banks having seemingly front-loaded their rate hiking cycles given the energy led acceleration in inflation that we’ve seen so-far this year.

US interest rates were increased again by 0.75% in late in July – which, aside from the previous month is a size of increase we haven’t seen since 1994. But after starting 2022 near zero, US interest rates are now set at 2.5%,  which is closer to what the central bank believes is the ‘neutral’ status – the level of interest rates which neither fuels nor restrains economic growth. This is an important milestone.

It’s worth noting that the European Central Bank also raised interest rates in July for the first time in 11 years, while the Bank of England acted in early August to increase interest rates by 0.5%, its largest increase in 27 years, as it once again increased expectations for the peak rate of inflation later this year. So, in the current environment, central banks still have much work to do, and inflation will remain public enemy number one for policymakers.

There’s been lots of talk about recession in the US, but also now in the UK after the Bank of England’s latest warning. So, where exactly do we stand today?

Taking the US first, whether or not that economy is in recession depends on whether you see the economic glass as half-full or half-empty. The ultimate decision comes down to the Business Cycle Dating Committee of the National Bureau of Economic Research (NBER) and it defines an economic recession by looking for a significant decline in economic activity lasting a few months or more across a range of economic metrics such as real GDP, real income, employment, industrial production, retail sales.

Are we seeing all these things? Well, GDP growth has now seen two negative quarters of growth in the US, albeit relatively shallow dips when compared to other downturns, but other data paints a brighter picture. The labour market remains strong with payrolls hitting a record high, while both manufacturing and services sectors appear to continue to be in expansion, and industrial production remains at healthy levels. Consumption, including retail sales appears to be slowing but holding up, supported by strong household balance sheets. But of course, the effect of inflation is being felt in real incomes, despite elevated wages growth, and the effect of higher interest rates is beginning to be seen in sectors such as housing, where activity has cooled significantly after a Covid induced boom.

Using history as a guide, two quarters of negative growth is certainly not a good omen, but every downturn is different, and the strength of the US jobs market certainly stands out on this occasion. If the US economy is in an official recession, we’ll probably not know for sure for some time yet.

And what about in the UK?

In terms of the UK, the economy is forecast to shrink in the last three months of this year and keep shrinking until the end of 2023 according to the Bank of England’s most recent update. That’s largely a result of significant increases in energy prices since it’s May forecasts. UK households were already facing a shock in real incomes despite a healthy level of wages growth, as inflation has reduced household buying power. But the Bank of England is clear in its expectation that household incomes, after the effect of tax and inflation, will fall sharply in 2022 and 2023 as a result of latest rise in energy prices. The Bank has also downgraded growth expectations across the economy by around –2.75% by the end of 2024.

It’s worth noting though that in baseline forecasts, while growth turns negative for an extended period of time, the Bank of England is expecting a relatively shallow recession when compared to past downturns – peak to trough declines in GDP of around -2.25% if energy prices remain at current levels, or -1.5% if energy prices follow the current path of energy futures. That compares with a decline of over -20% during the pandemic, and over -5% in the financial crisis.

That of course is a limited silver lining to households and business that will continue to face a protracted period of rising costs and uncertainty, but every recession is different and as currently forecast this doesn’t resemble the severe downturns of 2008 or 2020.

We’ve also seen the kick off of the second-quarter earnings season. With around four fifths of companies having reported, what’s been your take on the results we’ve seen so far?

From what we’ve seen so far, the numbers are coming out largely above expectations in the all-important US stock market. As it has for households, it’s been a challenging period for companies across many economic sectors with shifts in the prices of materials, increased wages and energy costs. But the results we have seen so far are encouraging – with earnings around 4% better than expected and earnings growth of around 9%. The standout performers have been in the energy sector, and without energy stocks the S&P 500 has delivered slightly negative earnings growth in aggregate, but still around 3.5% better than analysts’ expectations.

In Europe, it’s a similar story with energy and commodity related companies leading the way, and earnings coming in around 9% better than expectations in aggregate for the European market.

Did you make any changes to the portfolios during the month?

In July we rebalanced our equity exposure to move to a neutral allocation across our portfolios. The balance of risks has been evolving since the start of the year, but we think this reduction is prudent given the current economic uncertainty in the face of continued inflation surprises, the continuation of the conflict in Ukraine, and the pressure this applies on economic activity and corporate earnings in the remainder of the year

In higher-risk portfolios, we also used the recent pull-back in energy prices to allocate further to equities in this sector, which we think will continue to fair well given supply constraints caused by the conflict in Ukraine. Energy companies are generating significant levels of cash flow at current energy prices, and we think there’s room for continued increases in buybacks and dividends. We did this by halving our existing holding in US financial companies, given bond yields have already risen quite far in 2022.

You can read more about these changes and our current positioning in a blog we published on the Nutmegonomics section of our website called: ‘How we’ve rebalanced portfolios for the months ahead’.

About this update: This update was filmed on 8 August 2022. All figures, unless otherwise stated, relate to the month of July 2022. 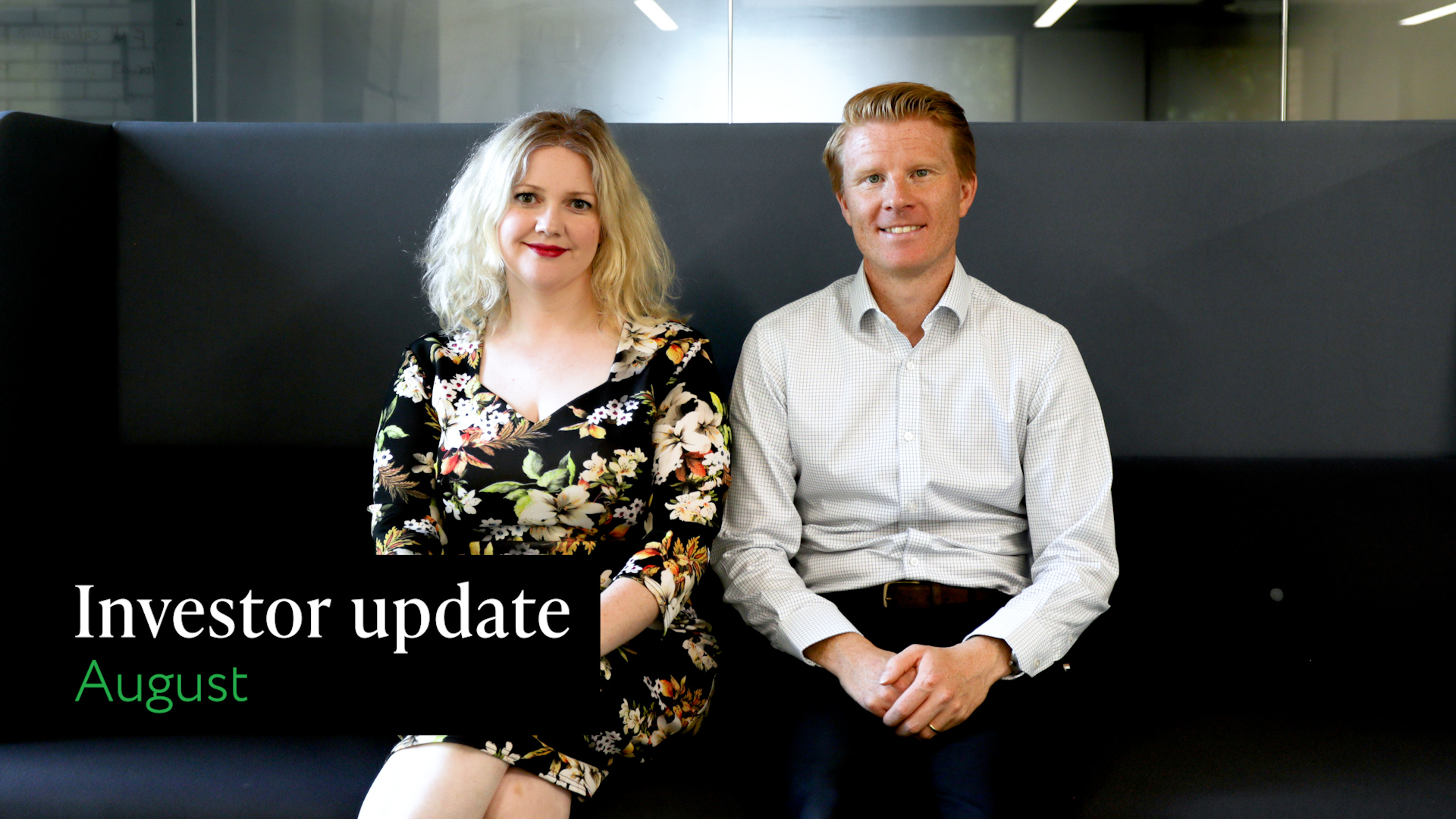