In this month’s investor update, Beth Igglesden, a client services associate here at Nutmeg, speaks with our chief investment officer, James McManus, about a volatile month for markets in November and what this has meant for Nutmeg portfolios.

Markets had a volatile month in November. What was behind this turbulence and what has this meant for portfolio performance?

November turned out to be turbulent for both equity and bond markets, particularly later in the month following the discovery of the Omicron variant of Covid. Fears that current vaccines may be less effective against this strain of the virus understandably caused some alarm, with investors fretting about further lockdowns which could derail economic growth. That meant losses for equity markets and gains for government bonds – a reversal of the trend we had seen up until that point in November.

November’s global financial market performance was heavily influenced by the end-of-month news flow, meaning a relatively poor month for riskier assets such as global equities, which fell around 2%, and high-yield corporate bonds, with losses of just over 1%. However, it was a positive month for safe-haven assets such as government bonds – UK gilts offered returns of 3% for November – and for currencies such as the Japanese Yen and US dollar.

From a portfolio performance perspective, those end of month moves meant lower-risk fully managed portfolios finished November with marginal gains of around 0.3%, while higher-risk portfolios with greater equity exposure finished the month with losses of around –0.5%. Our socially responsible portfolios meanwhile delivered returns of 0.2% in the lowest risk, and gains of 0.4% in the highest risk as global socially responsible equities fell less than the wider market.

The Bank of England surprised markets in November by not raising interest rates. What do you think was behind this decision, and how did it impact markets?

The Bank’s Monetary Policy Committee was widely expected to make a change but held off due to wanting clarity over the impact on unemployment of the end of the furlough scheme in September. As the official data was not available at the time of the meeting, committee members erred on the side of caution.

This was a surprise to investors due to the extent of policy makers’ communication in the weeks before. The Bank’s governor, Andrew Bailey, and other senior policymakers have regularly warned of the need to take action to control inflation in the UK that has continually exceeded Bank forecasts so far in 2021.

In the end, the decision itself was quite one sided – a vote of 7-2 in favour of holding rates at the current level, but the market reaction was strong – government bonds rallied and the pound declined as the market adjusted its expectation for higher interest rates in the near term.

Where does this leave the Bank in the run up to its December meeting?

The Committee may also take a cautious approach in December, particularly while we now wait to see the extent of the spread and impact of the Omicron variant. The Bank must look to balance the risks of high near-term inflation pressure with a continued economic recovery though, and it’s worth noting that data on the labour market has remained robust post the end of the furlough scheme – job vacancies are at an all-time high, unemployment fell further in September and wages growth remains elevated.

Alongside that, UK inflation again exceeded expectations in October. So, with a backdrop of a robust labour market, continued strength in high-frequency economic activity indicators, and continued near-term inflationary pressures, the December monetary policy meeting will be a key market event for UK investors.

We remain underweight UK government bonds across our portfolios on the expectation that the Bank of England will eventually lead other developed central banks in raising interest rates, though this may now be delayed until the new year.

We continue to expect a normalisation of bond yields higher as the global economic recovery continues, which all else considered means losses for bond holders. As such, we prefer to hold some of our exposure in cash at the current time.

From a data perspective what else stood out in November?

There were many important data points out in November but one positive to highlight was the re-strengthening of several key US economic measures.

If we wind back a couple of months, economic data had lost some of its momentum as it came off peak growth rates in the early stages of the economic recovery – something we always expected to happen as economies normalised. It was still robust, but the delta variant was spreading quickly in the US, and GDP for the third quarter of the year grew slower than expectations as a slower pace of consumer spending and reduction in government spending collided with supply chain issues.

However, data in recent weeks would suggest that the fourth quarter should fare better, particularly as consumer activity is picking up again as supported by strong retail sales data. The labour market continues to strengthen, and the number of Americans claiming unemployment benefits fell again in October. Other economic indicators suggest business activity has again picked up which is supporting company profit margins.

There are also the very first tentative signs that some supply chain issues are easing. There remains a fundamental imbalance in demand between goods and services that is likely to see some supply chain challenges persist over the coming year, but falling shipping and freight rates, alongside signs that the inventory shortages have passed their peak are welcome news.

The outlook for the global economy is relatively robust in the run up to Christmas, but what is keeping you and the team up at night?

Examples that come to mind would be the tensions on the Ukraine/Russia border, the politicisation of European energy suppliers and the wider EU relationship with Russia. Of course, we also shouldn’t forget the recurring issue of Brexit relations between the UK and EU.

Towards the end of the month of course, we learnt of a new covid variant too. Here we await data rather than speculate on the outcome. As always, it’s hard to hedge individual events, so our focus is on remaining diversified and focusing on how geopolitical and pandemic risks will impact the global economy medium term.

About this update:  This update was filmed on 03 December 2021. All figures, unless otherwise stated, relate to the month of November 2021. Source: MacroBond, Nutmeg and Bloomberg. 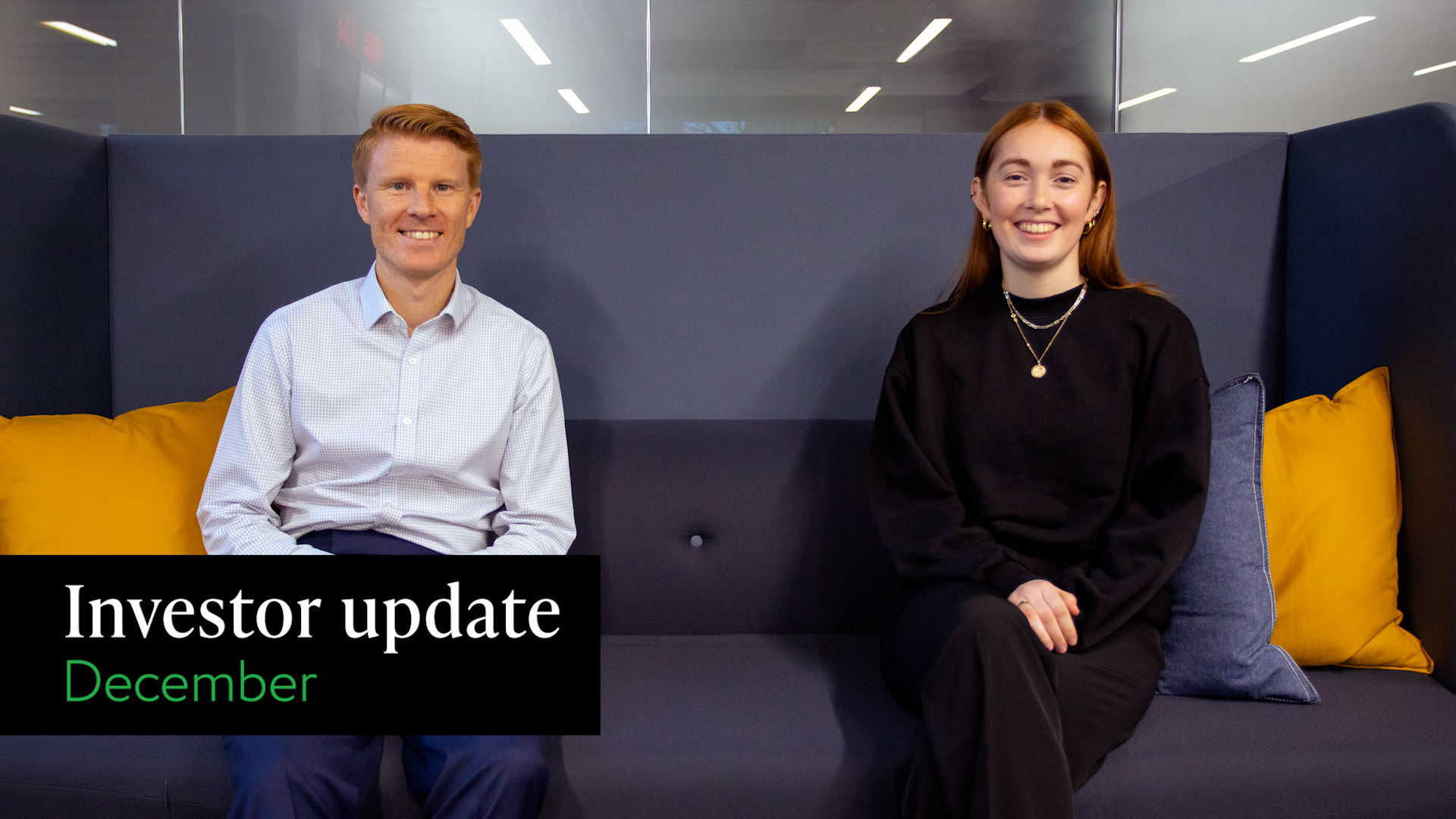