Will parliament pass Theresa May’s deal today? There is certainly more chance than when it last faced a vote on 15th January, particularly after the Prime Minister’s last minute talks with the EU in Strasbourg. But even if that doesn’t occur, the Prime Minister has a plan.

The crucial point is that a no-deal looks now to be a very low probability event in March.

Theresa May has not indicated how much extended time she will ask for, but she wants it wrapped up by 2nd July when the new EU parliament convenes.

The impact on UK financial markets from either a deal or an extension that leads to a deal are very similar; a strong UK currency, rising gilt yields and a likely outperformance of UK small and middle-company stocks over large companies.

Large companies derive a larger share of their profits from overseas sales, and a stronger UK pound-sterling marks down the value of those profits in UK currency terms.  The currency and gilt yields remain well below levels prior to the 2016 Brexit vote, as a worst-case Brexit scenario was priced-in.  A deal will mean this can be unwound, causing the pound to rally and gilt yields to rise.  Rising gilt yields is bad news for bond investors as price and yield are inversely related.

There remains, at least, the possibility that an extension to Article 50 merely postpones the cliff-edge from March 29th to sometime before July.  In this event, the Prime Minister will have three options.

Nutmeg takes the view that a deal will be passed either today (on 12th March) or soon into an extension period, leading to adjustments in UK asset prices.  Fully managed customer portfolios have been positioned for this, but still, we remain vigilant.  And we stand ready to respond to a more unfavourable outcome.  A day is a long time in politics, particularly in this end-phase of UK-EU negotiations.

We’ve used the BBC’s handy flowchart to illustrate how today’s decision will impact the countdown to March 29th. See here for more 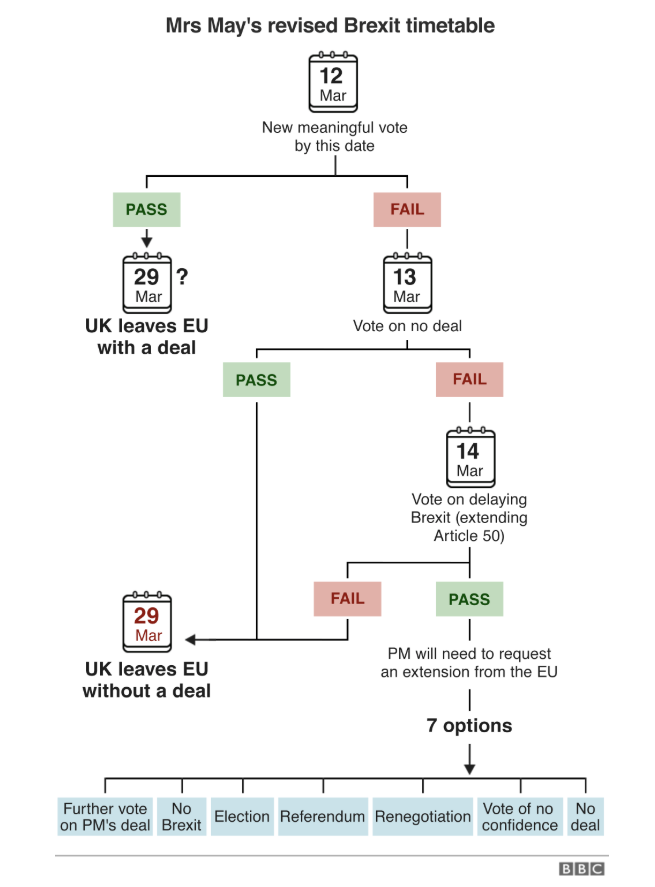 14th  Vote in support of Article 50 extension (June at latest)