A snap UK election – a smoother Brexit ahead?

The next general election is now a mere seven weeks away. We believe the election pushes the balance of probability towards a smoother and perhaps even softer Brexit than before. Ironically, this is somewhat negative both for the FTSE 100 and UK government bonds.

Theresa May’s recent announcement of a snap general election on 8th June is designed to give the government a more powerful mandate to negotiate with the European Commission. Investors have taken this as a signal that the road to exit will be a less bumpy affair.

Most recent polls put the Conservatives between 9 and 24 percentage points ahead of Labour1. Translated into parliamentary seats, this could give the government a majority of over 100 seats, compared to the current 17. A win in June would provide some breathing space to negotiate a deal with the EU without the pressure of a general election looming on the horizon.

The consensus view among investors is that a bigger commons majority will give the prime minister more time to reach a better compromise with the EU, against the will of the more hard-line Eurosceptic MPs.

On the day the prime minister announced the election the FTSE 100 fell by 2.5%, the largest decline since the referendum. But the fall was not only about the uncertainty of the election, as the FTSE was already down by more than 1% before her announcement due to falling Asian markets and commodity prices. The sharp jump in the pound — up 1.4% against the dollar to its highest level since October — was more significant, leading to a sell-off in companies with big export earnings. The more-domestically focused mid-caps (FTSE 250) lost 1.2%. 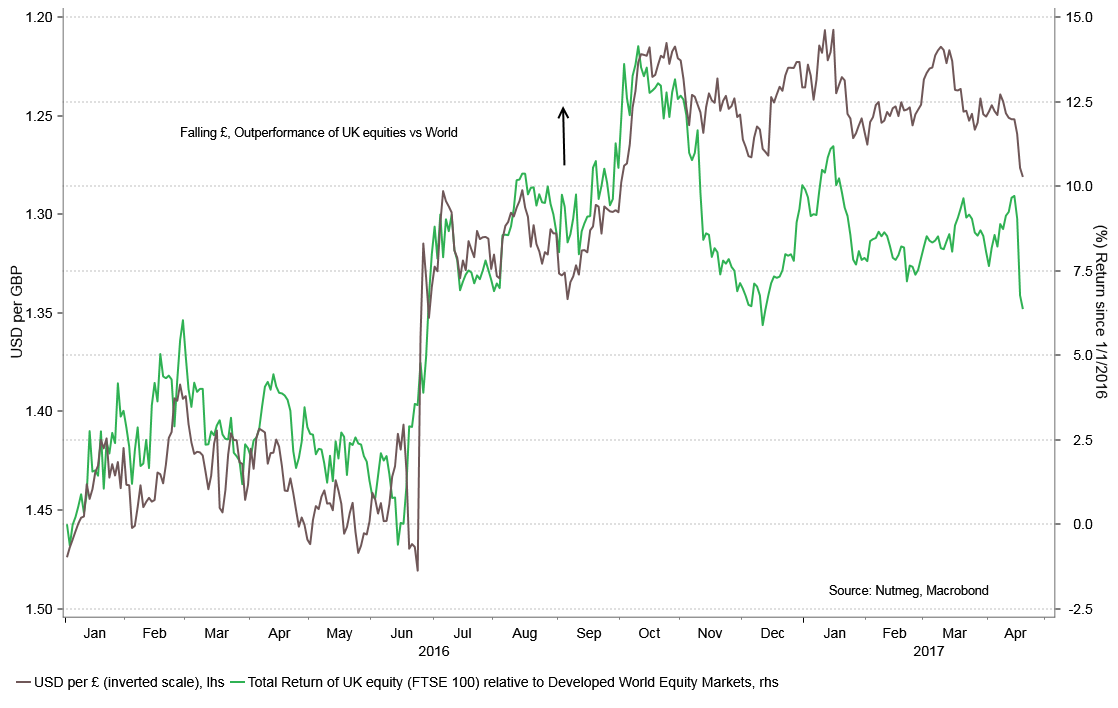 General elections rarely prove to have a significant impact on UK equity markets. In the past three general elections, the performance of the FTSE 100 in the ten weeks following each election ranged from -0.9% to +1.7%, relative to global stock markets.

But this time it may be different.

In our view, the general election pushes the balance of probability towards a smoother and perhaps even a softer Brexit than before. In other words, some degree of compromise from the government on its ‘red lines’ such as the powers of the European Court of Justice and freedom of movement. Ironically, this is somewhat negative for both the FTSE 100, recently buoyed by a weaker pound, and UK government bonds, which appear to be pricing in a hard Brexit.

The impact on portfolios