Surfing the macro data flow: Our outlook for growth

The global economy has had a wild ride during the past 18 months. Cycles are always exaggerated during shocks, and the remainder of 2021 will continue to surf the tail-end of what we would describe as a macro-data wave created by last-year’s shutdown. Still, with the gradual re-opening of businesses, both in the UK and the US, we expect growth to moderate to more sustainable rates. 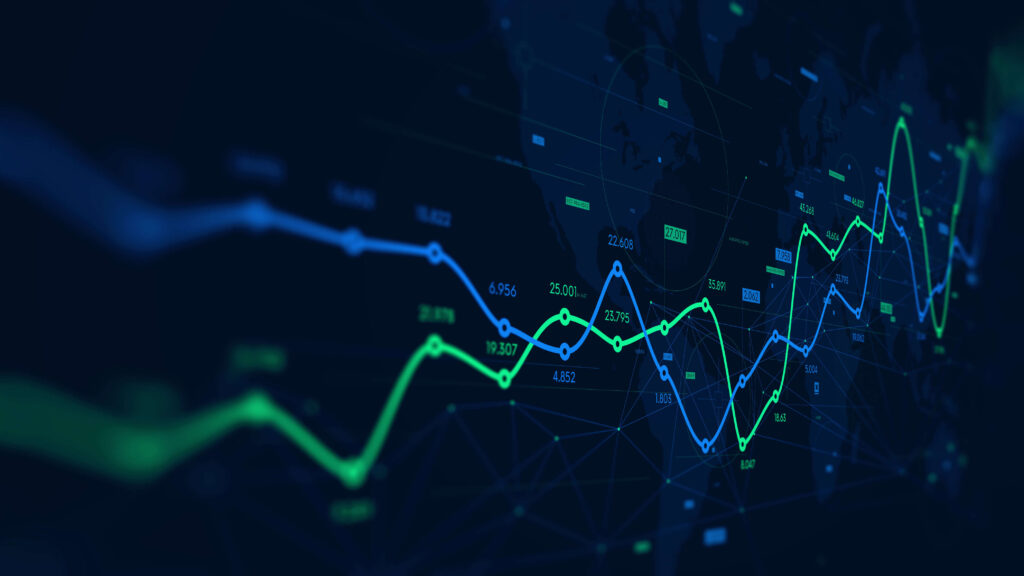 In keeping with our wave analogy, the 2020 shutdowns triggered something of a tsunami in economic output. Chart 1 shows the UK economy shrank to less than 80% of its December 2019 level; the US shock was only half as large but still unprecedented. By the third quarter of 2021, the US economy had made up all the decline, with the UK still a little under-water. 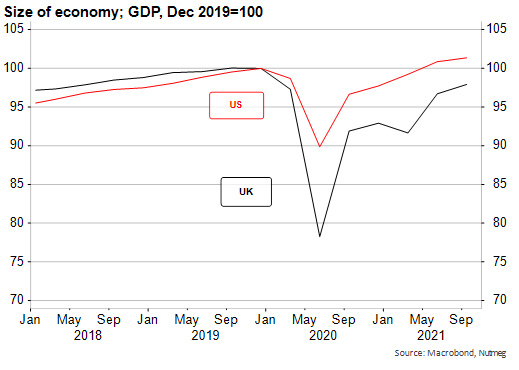 Yet Chart 2 shows the speed of the snap-back in UK growth was almost double that of the US. The concentrated, mandatory nature of the UK shutdown seems to have created a ‘harder they fall, quicker they rise’ dynamic.

However, the UK economic wave must peak; such growth rates are as unsustainable as they are unnatural. This chart shows how the long-term average growth rates of the UK and US economies (the dotted lines) are between two and three percent – still below the September-quarter readings. 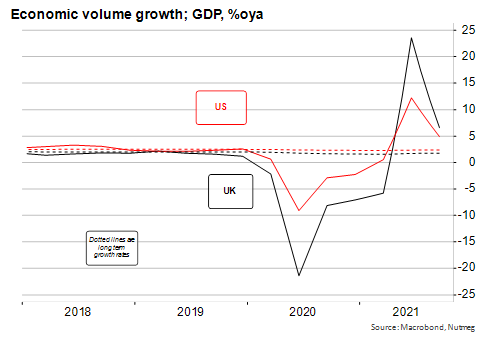 Some indicators already past the crest of the wave

And we are already seeing this wave formation topping out in higher-frequency economic data on both sides of the Atlantic. The next two show how housing activity, industrial production, and retail sales have all fallen below the crest.

We are relieved to see such moderation, since persistent excessive growth would make existing inventory problems (and their inflationary impact) much worse. 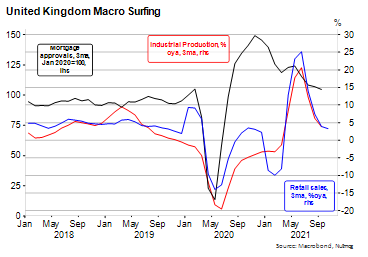 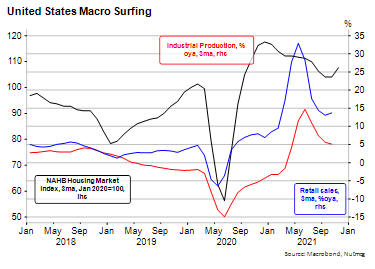 Inflation to settle back too… eventually

The supply bottlenecks caused by the supply and demand shocks of 2020 are creating price-pressures. Much of this is expected to be temporary, as economies navigate past the worst. However, inflation traditionally lags economic cycles by up to 18 months and continued economic recovery should create normal cyclical inflation pressure into and beyond 2022.

Base effects are important too with, for example, the UK’s August 2021 annual data being influenced by the ‘Eat Out to Help Out’ discount scheme introduced 12 months before. The restaurant component of the August 2021 UK CPI was measured at an 8% rise on the year but fell back to 5% in October. 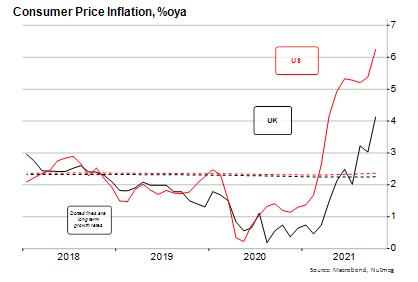 The Nutmeg investment team expects global demand recovery to continue at a more moderate pace, remaining above long-term averages. We expect many supply constraints to be overcome as re-opening continues into 2022. But we also expect global supply-chain change resulting from the COVID-experience, and continued impact of US-China rivalry. There is also the influence of ongoing technological change, such as the rise in electric vehicles. As mentioned, moderate inflationary pressures are expected to persist with their usual lags.

All this means that fully managed portfolios are positioned with a small equity overweight (equities are a good inflation hedge) and a larger underweight in fixed income assets, which usually perform less well during inflation. Cash positions are correspondingly higher than would normally be expected, held for diversification.

As always, the investment team monitors economic and market conditions daily and stand ready to adjust managed portfolios should the need arise. 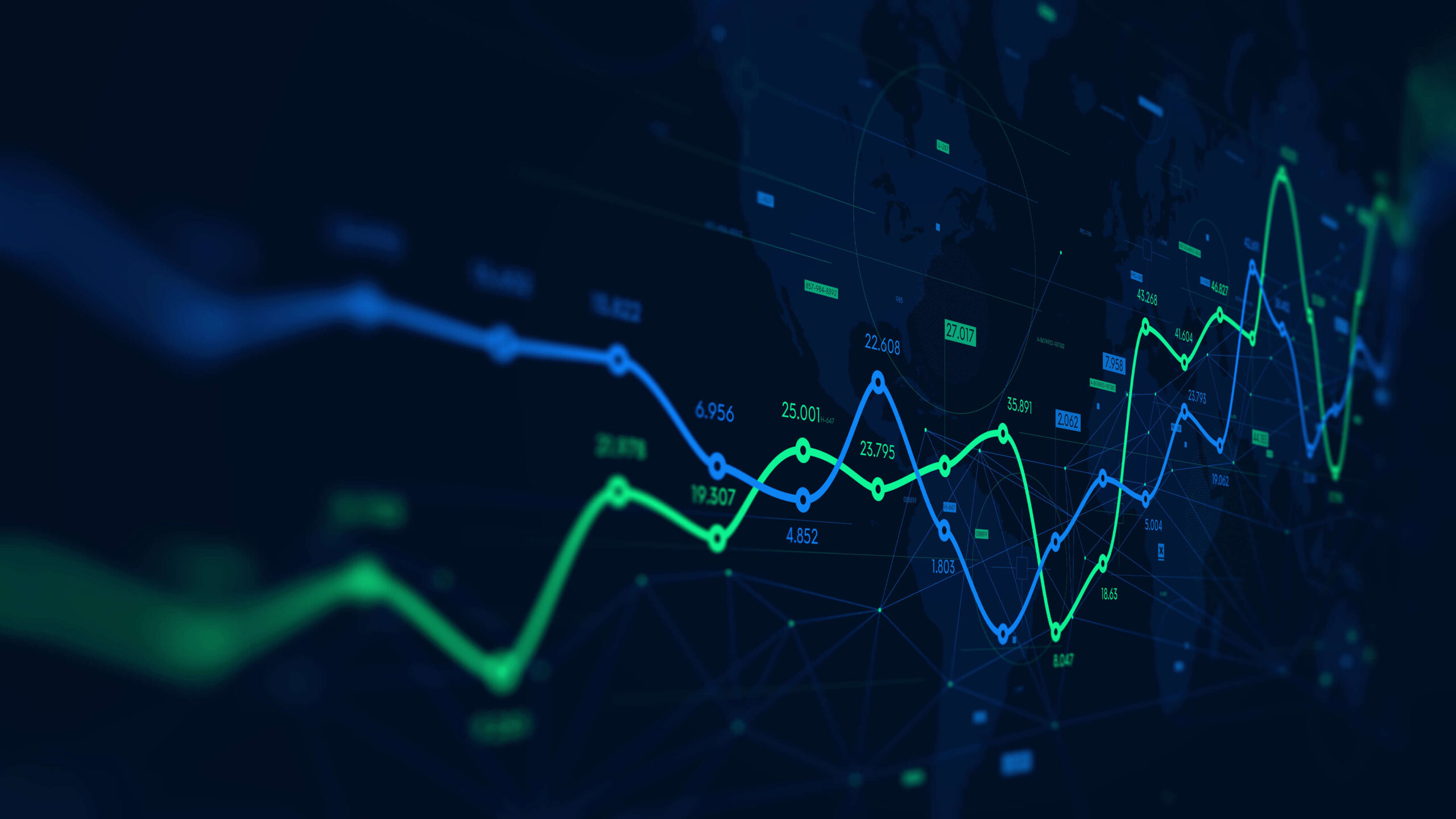