US–China trade talks had largely been perceived to be progressing steadily, albeit slowly, towards a resolution. However, the surprise announcement of a further round of US tariffs, and the weakening of the Chinese currency through a symbolic level make the case that a near term resolution will now be far from simple.

On August 1st, President Trump announced a further set of 10% tariffs for the remaining untouched portion of goods imported to the US from China, effective September 1st. This was a surprising escalation in trade war rhetoric, given the markets’ perception of a truce post the Xi-Trump meeting in June, and the description of recent trade talks by Chinese officials as ‘frank, effective and constructive’¹

This round of tariffs is also different to previous goods targeted, in that it affects high volume consumer goods such as clothing and footwear, smartphones and toys. Despite only being set at 10%, US consumers are likely to more directly feel the effects of these tariffs as they capture many finished consumer goods.

For example, a staggering 69% of footwear purchased in the US is imported from China ², all of which will now be subject to a 10% tariff post September 1st. The below chart shows the effect on consumer washing machine prices year–over–year of the first round of tariffs imposed in 2018 – clearly demonstrating how at least part of the cost was passed to consumers as tariffs hit. 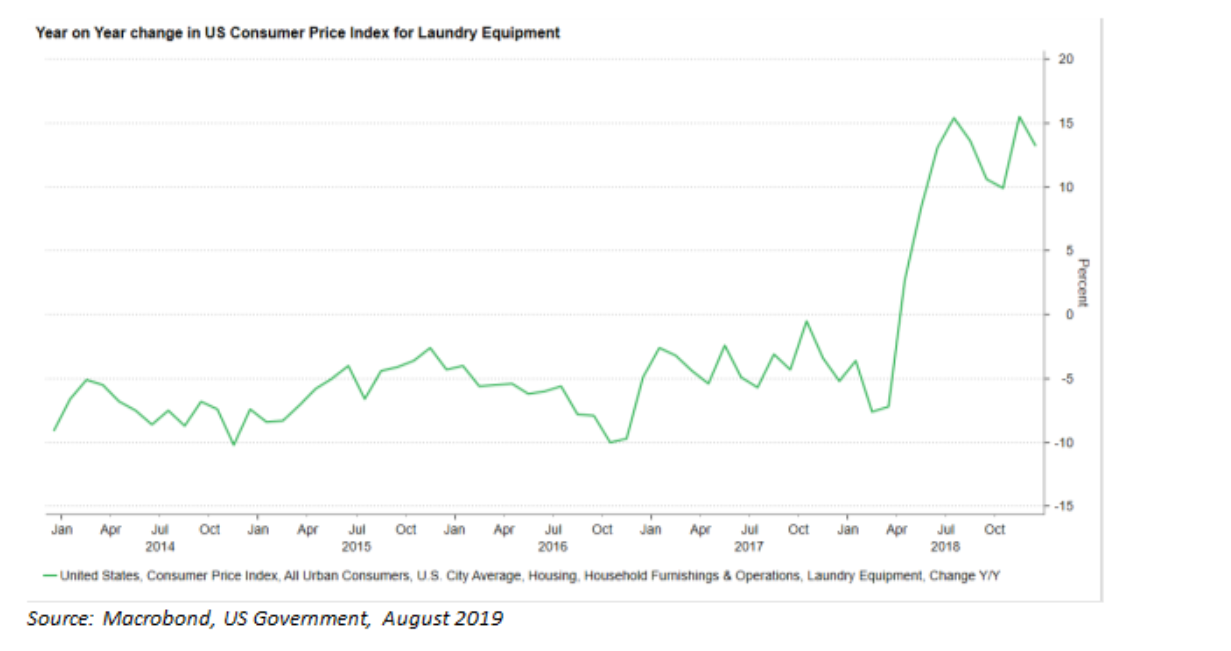 It has been reported that President Trump decided on the further tariffs having grown frustrated with the lack of progress at recent trade discussions, and at a perception that China was slowing talks. Back in May, the US expressed frustration at the walking back of promises made in trade discussions, and commitments to purchase further US agricultural products do not appear to have done enough to appease the president.

As the 2020 US Election campaign begins in earnest, President Trump will be unlikely to make any significant concessions ahead of the election, preferring instead to take a hard-line protectionist stance on China, while showcasing his ability as a deal maker and tough negotiator.

The Beijing authorities meanwhile may prefer to stall talks in the hope that a Democratic candidate is successful in the election and may offer an easier route to trade concessions. Concessions from the current administration may also be easier to come by when the president isn’t campaigning.

Meanwhile, China weakened its currency to the lowest rate in over a decade ³ following the announcement. This was a serious statement of intent, allowing the Yuan to weaken to over 7 Yuan per US dollar, a psychological level for investors globally. In doing so, China counteracts the intention of the proposed tariffs by making its goods cheaper to purchase and thereby somewhat offsetting the tariffs imposed.

However, this is unlikely to be well received by a US administration who has repeatedly labelled China as a currency manipulator, and who’s primary issue with Chinese trade remains the uncompetitive playing field and large trade deficit between the US and China.

Whether China weakens its currency further from here or shows restraint in its approach could dictate whether the two sides remain amicable enough to come back to the negotiating table in September.

The Federal Reserve may be caught in the middle

Immediately after the weakening of the Chinese Yuan, President Trump once again called on the US central bank to take action. The president has been a critic of the Federal Reserve of late, believing higher interest rates are stifling growth, and that lower interest rates and a weaker US dollar would make the US more competitive. The Federal Reserve traditionally operates with independence from political leaders, and President Trump’s interventions have been viewed as unusual, though interest rates could be viewed as an easy scapegoat for businesses and consumers feeling the effects of existing tariffs.

In a move that raised the global economic mood, the Fed recently cut interest rates for the first time since the global financial crisis. The move was largely perceived as an insurance policy – providing stimulus in the form of lower interest rates to ensure the economic momentum continues, in spite of the trade headwinds and softer economic data domestically.

However, the imposition of further tariffs and subsequent weakening of the Yuan reduce the effectiveness of the Fed’s move, meaning in order to have a meaningful impact the Fed may now need to cut interest rates further. In fact, financial markets now expect a further rate cut to come in September.

So, the Fed is now in a difficult balancing act, seeking to manage inflation and support the continued growth of the economy without being forced into further rate cuts than its feels necessary, all while incurring the public wrath of President Trump.

How are Nutmeg portfolios positioned for this? 

Meanwhile, potential remains for Brexit related trade disruptions in the European economic area, and for the US to turn its focus to Europe and in particular the auto industry, while other export orientated economies globally are involved in their own, albeit smaller disputes over the trading terms – for example, Japan’s recent removal of South Korea from its trusted trade partner list. Taken collectively the outlook for the global trade environment has deteriorated from earlier in the year, and we remain cautious when it comes to a near-term resolution of these issues.

That said, there remains much potential for the central banks to raise the global economic mood significantly through stimulus, supporting the continued expansion even as trade headwinds continue unabated. We think central banks, such as the ECB, will follow the Fed in announcing stimulus in order to support their economies, a move that is typically well received by equity markets. So, we retain modest exposure to equities in our managed portfolios and remain overweight the US market. 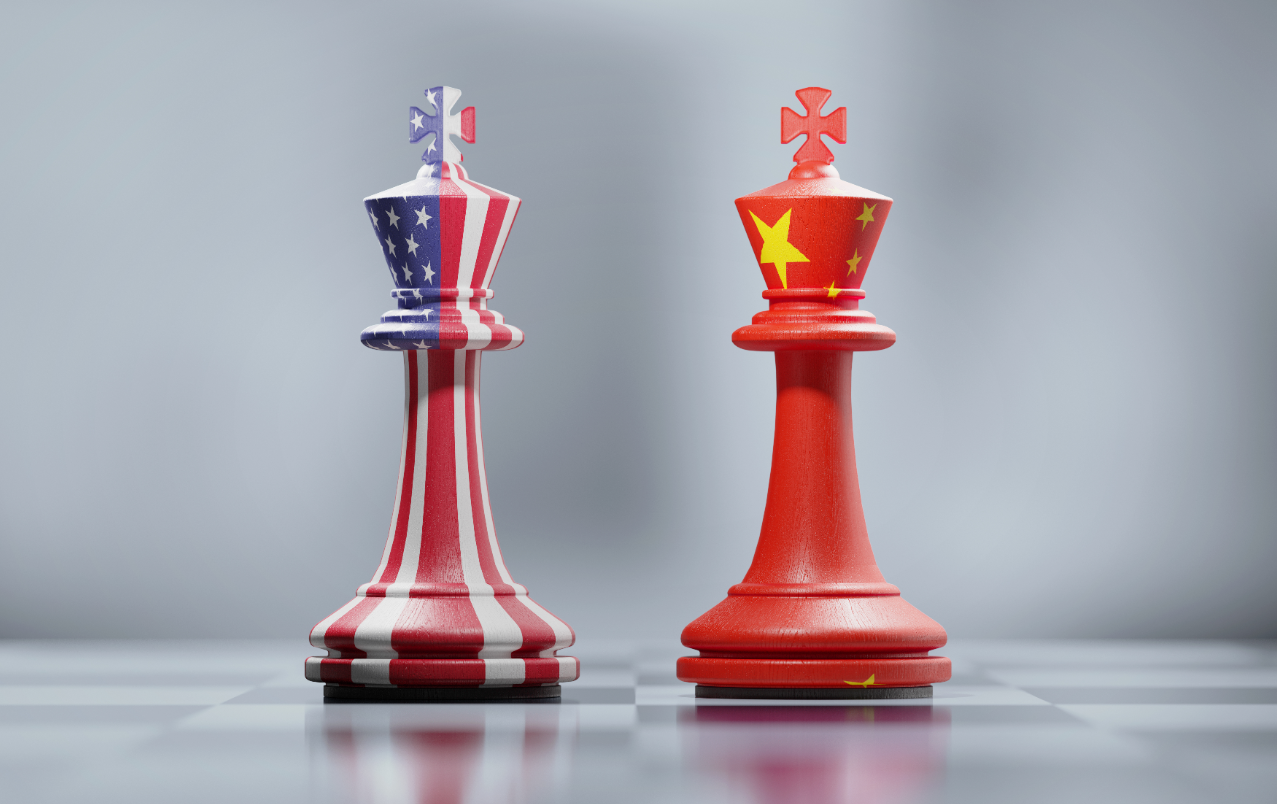