Donald Trump’s new administration has failed its first major test — to push through legislation to roll back Obamacare — unsettling investors who were hoping for imminent tax cuts. But we believe the rally in global stock markets is about more than just a bet on the new American president.

Stock markets fell last week as it became evident that one of President Trump’s key election promises — to roll back the Affordable Care Act (aka ‘Obamacare’) — would not pass through Congress.

This failure to deliver on a policy that had broad pre-election support from the Republican Party worries investors. Many are now asking whether the administration will also fail to deliver on election promises to cut taxes and regulation. The US stock market fell 1.4% last week, with financial stocks down nearly 4%.

Is this the end of the ‘Trump rally’?

While the promised tax cuts and regulation changes are still likely, policy changes will now have less of an impact in 2017 than many had thought, with much of the boost to earnings being felt later, in 2018.

More importantly, however, rising markets are not just about Trump. In our opinion, the switch in investor psychology from fear of deflation to hopes of reflation is the primary underlying cause of the rally in global markets. This type of switch has profound implications for valuations of many companies, particularly banks.

Investors’ expectations for future US inflation have been rising steadily since early September 2016, from a low level. 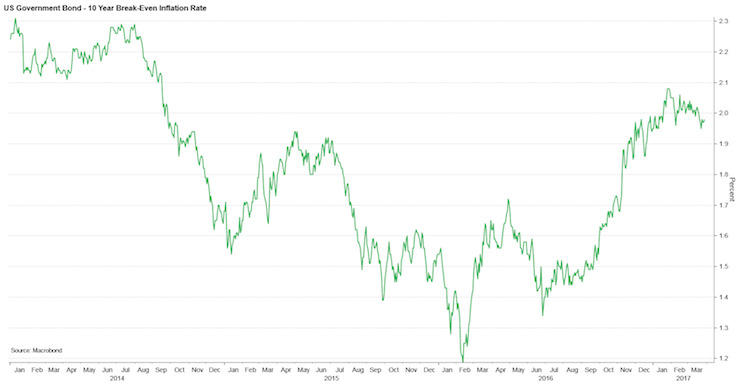 At the same time, the global economy has been improving faster than investors expected. The chart below shows how the daily flow of economic news has exceeded investors’ expectations, shown by a rise in the index of ‘surprises’. 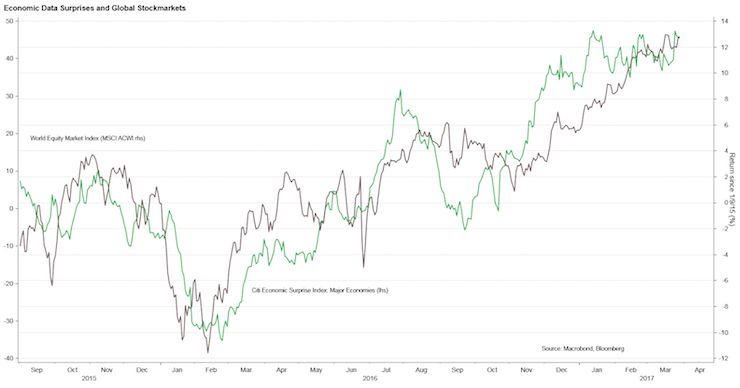 Not surprisingly, this has led global equity markets higher, both in developed and emerging markets.

While investors’ growth expectations have risen, and may disappoint in the short term, we believe that world economic growth will continue to accelerate in 2017, supporting market gains — despite a likely delay in Trump’s tax cuts.