For many people in their twenties, thirties and forties paying into a pension is maybe the last thing on their minds. Younger people tend to have competing demands on their money such as monthly student loan repayments, paying for master’s degrees or professional qualifications, saving for a first home and furnishing it, getting married and having children. It’s no wonder that paying into a pension gets pushed to the bottom of the priority list. 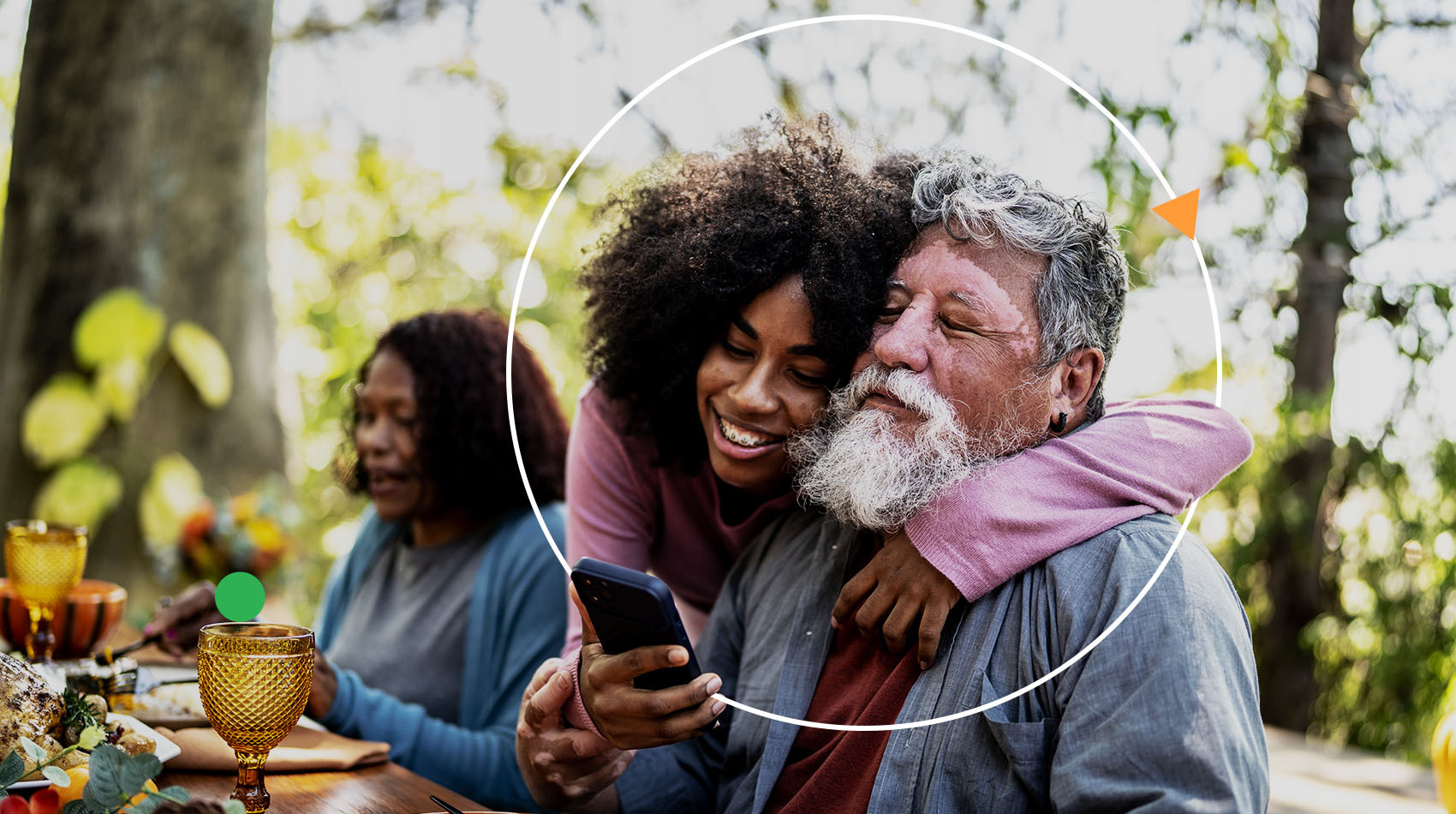 Although it’s understandable that retirement planning doesn’t feel like a priority, avoiding the topic won’t make it go away.

There are few certainties in life but one of them is that almost everybody reaches the point that they need, or want, to step back from working. At whatever age that happens, you will need to have built up a nest egg big enough to live off – so if you ignore your pension, you’re making it harder for yourself later.

We’ve crunched the numbers and found that putting off retirement saving from the age of 25 to 35 means playing a game of catch-up that will cost an additional £1,812 a year. Read on to see how this works – and why it’s never too late to get your pension back on track.

How much should you pay into your pension?

In June, consumer champion Which? estimated an individual will need at least £12,000, after tax, a year for a basic standard of living in retirement, which means covering the bare necessities of food, bills, transport and housing costs. For a more comfortable lifestyle which includes money for eating out, hobbies and an annual holiday in Europe, around £19,000 a year would be needed.

We’ve calculated how much people need to contribute to their pensions each month at different ages to achieve different levels of income when they stop working. 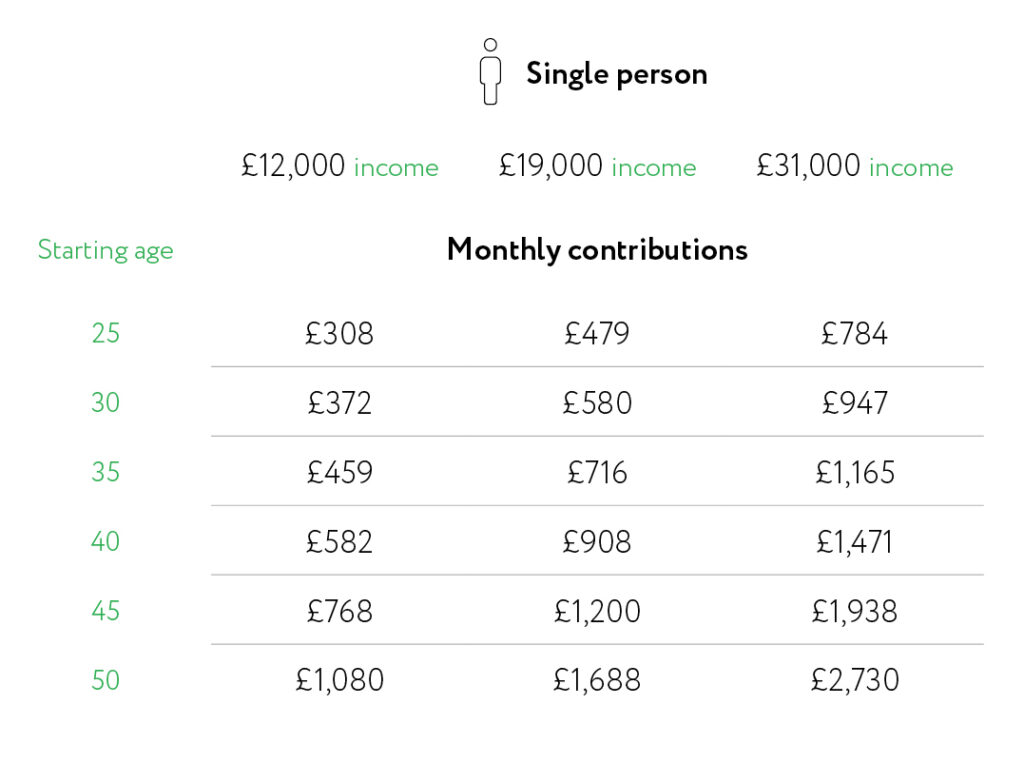 These calculations assume people stop working at the traditional retirement age of 65, although it’s more common these days for people to continue working past this age. Those additional years of working also allow more time to boost one’s pension pot.

Contributing to a pension in your twenties or thirties

However, people in their twenties, thirties and forties today have no way of knowing how they will feel about working when they reach their sixties and beyond. Some in this age group are full of energy, highly experienced and enjoy reaping all the benefits that work brings – not just the financial rewards, but the social interaction, mental challenges and enjoyment of putting their skills to use.

Others are keen to retire, for many reasons that can include having time to pursue non-work interests, start a business, spend more time with family, move across the country or emigrate, and to see the world. Some people have to pare back their working lives due to ill health.

The crucial thing for under-40s to realise is, no matter what life throws at them, ideally they would have built big enough pensions to give them choices.

Discover more: Understanding pensions in an era of disruption.

Money held in pensions is invested in assets which should (hopefully) increase in value. Our calculations assume that your investments will rise by 5% – this is the middle of the three rates of investment return that the financial services regulator, the Financial Conduct Authority, suggests pension providers use to help clients understand how their investment may perform. The longer you ‘hold’ or own investments, the better the chances that they will increase in value – although as with everything money-related there are no guarantees with investments.

If you’re contributing to a workplace pension, then your employer is also likely to be contributing, which means the full monthly contribution will be partly covered by them.

Money in a pension also receives a top-up from the government in the form of pension tax relief.

These top-ups effectively cover some of that monthly contribution too.

Building a pension after 40

Ideally people would start paying into a pension when their working lives begin. But there can be many competing priorities – and while it’s better to have started early, it’s never too late to super-charge your pension saving.

The over-40s are often at a stage of life where planning for retirement is more manageable. Earnings tend to be higher for this age group, for example, some of life’s big expenses may be behind them – such as the costs involved in training or education, buying a first home, or a wedding.

Couples can motivate each other to save for retirement and, although raising a family is an expensive endeavour, once in retirement living costs are lower for couples as they share essentials. Table 2 shows the combined amount two people should contribute to their pensions to have a joint income of £18,000, £28,000 or £45,000. 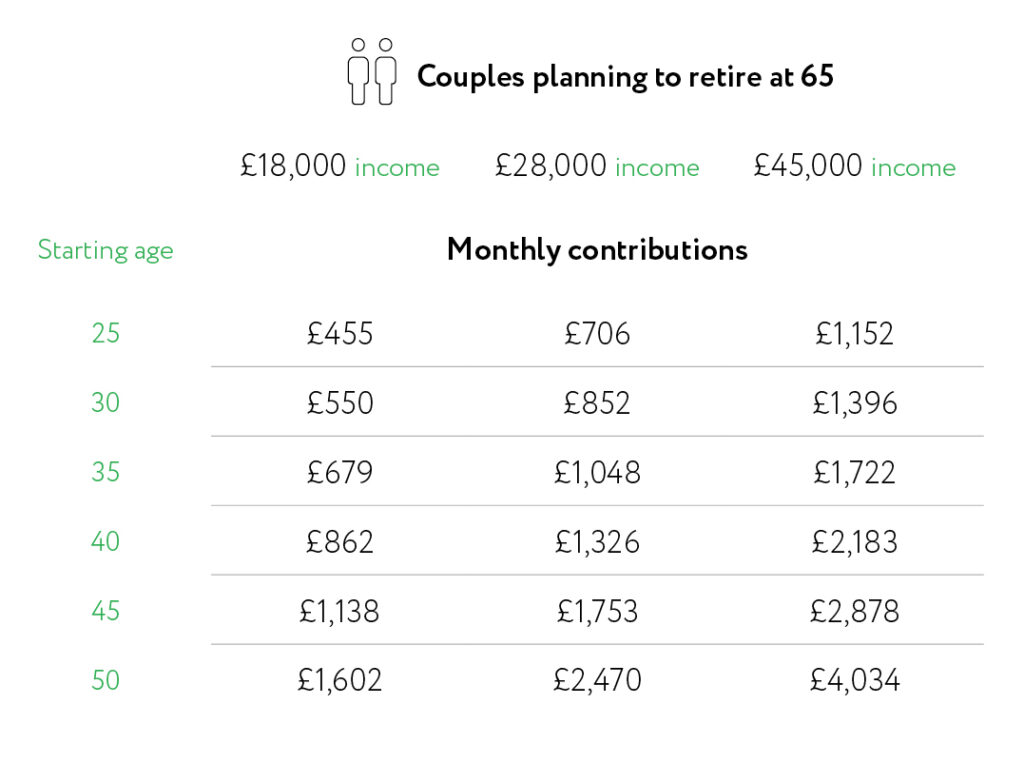 Although planning a grand adventure such as stopping work can be fun and financially easier to manage when it’s done with someone else, remember that everybody should try to have savings of their own.

Pensions can only be held individually, although usually they allow a spouse, civil partner or named heir to inherit money that’s left over when you die. These are known as ‘death benefits’ and the rules vary depending on the kind of pension scheme, so make sure you check the fine print on yours.

Building up a pension pot will allow you to have choices later in life. It can seem like a huge challenge, especially at a time when day-to-day living costs are high.

Even if doesn’t feel like you’re putting much away initially, the sooner you start, the better. And if you can increase the amount you put into a pension when you get a pay rise or make one-off payments, your future self will be very grateful.

We assume tax relief of 20%. As such, somebody allocating £1,000 in a month, will see an effective allocation of £1,200 in the simulation. Growth of 5% pa is assumed in these projections. All figures take into account Nutmeg investment fees and are inflation adjusted for contributions and drawdown (increase of 2% per year). These scenarios assume that the pot will be zero at death. The state pension is not included within this given we are simulating a retirement age of 55 and 65. Length of retirement is assumed to be 30 years.

As with all investing, your capital is at risk. The value of your portfolio with Nutmeg can go down as well as up and you may get back less than you invest. Projections are never a perfect predictor of future performance, and are intended as an aid to decision-making, not as a guarantee. The projection includes the effect of Nutmeg’s fees, investment fund costs, and market spread. A pension may not be right for everyone and tax rules may change in the future.